Asparagus and peas braised in butter with herbs, hazelnuts, kasha and lemon 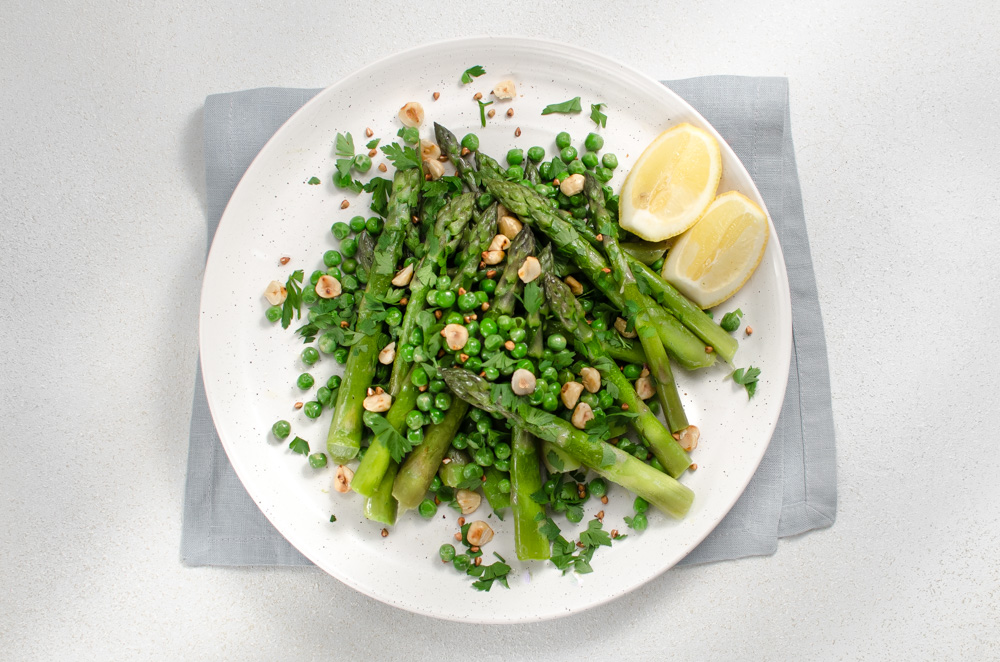 The sad decline of local asparagus…

When I was a child, living in California, asparagus was a bountiful staple. Our mother, cooked it simply and served it stacked in big piles on the dinner table – we ate it just as it was.

Asparagus has been grown in Californian for over 150 years, it’s always been a plentiful and affordable crop. The main centre of production is around Stockton, yet it was also grown in Southern California. The area where we lived in Orange County was at the time very agricultural. We were just as likely to buy asparagus from shacks alongside the growing fields as our local supermarket. Although, our local asparagus fields have long-since been sold for tract housing, California has remained the biggest producer of asparagus in the United States. However, over the past couple of decades there has been a marked decline in production as farmers give up the crop.

The reasons are economic and reflect global trends across all markets where labour is the main cost of production. Asparagus is a particularly labour intensive crop compared to others. Recent trade deals have compounded the situation by eliminating tariffs on Latin American asparagus. This has resulted in cheaper imports making the home-grown crop comparatively expensive and unsustainable as a profitable crop. As retailers and consumers chase ever-lower costs, local producers are forced into finding alternative use for their fields. Some sources say that in the last 15 years Californian asparagus production may have fallen from a high of around 40,000 acres to 2,000 acres.

The same trends of course, can be seen in the UK, where asparagus from Latin America and elsewhere is available all year round. British asparagus growers are facing the same economic pressures as their American cousins. For the moment, there appears to be enough loyalty and goodwill for high quality and flavoursome British asparagus to keep it on our shelves. But what of the future – if, as in California, British retailers and consumers favour lower costs over local quality, will we also lose our home-grown asparagus?

Our mother never made fancy recipes with asparagus; she would simply toss her spears into a pot of boiling water, drain, and then dress with butter and salt. I like to think that her inherent understanding of such a delicate vegetable dictated a simpler approach. But I suspect it was more to do with time-saving efficiencies than any reverence for the king of vegetables. This recipe is a tribute to her style of cooking and proves – for whatever reason – keeping it simple really can be the best way…

2. Snap the tough base from the stalks and pod the peas. Using a large saucepan with lid, bring enough water to cover the asparagus to a boil, add the asparagus to the water with a pinch of salt, cover and boil for 3-5 minutes until tender but firm. Remove from the water and drain. Keep warm. Add the peas to the same water and boil for 2-3 minutes. Drain, empty the pan of its water.

3. Return the asparagus to the pan with the butter and braise on a medium heat for a minute or two, add the peas and toss well.

4. Empty onto a serving plate, season and scatter with herbs and the toasted nuts and kasha.