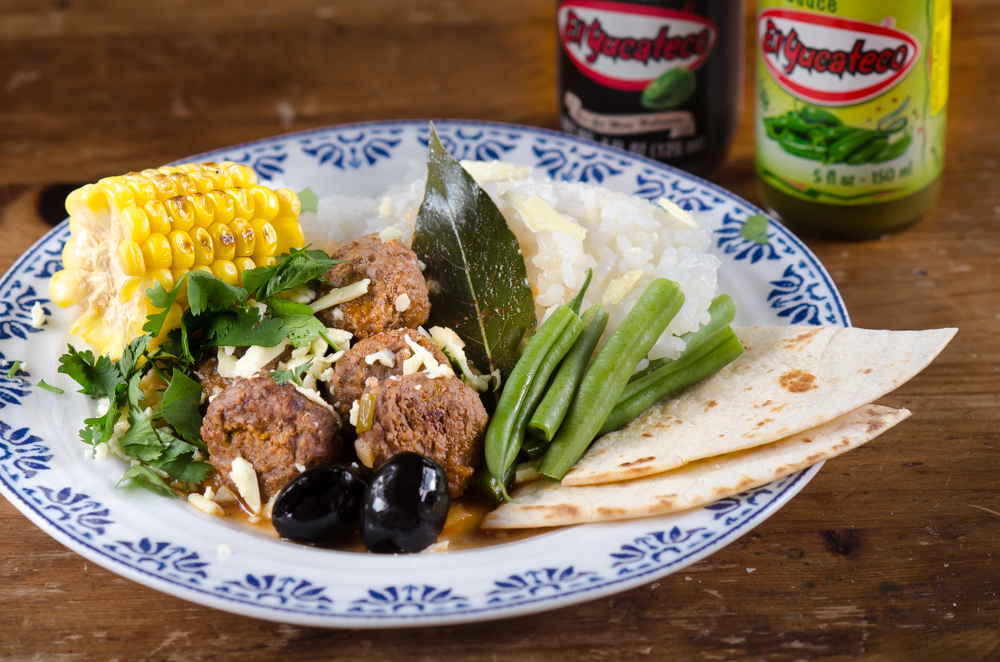 65g chopped spring onion – including most of the green

Corn on the cob

Bottles of chilli sauce!!! We like to use El Yucateco from Mex Grocer

It’s said that Mexican cuisine in not overtly hot. Although milder dried chillies will be used in normal cooking, the real heat is saved for table sauces and condiments. On this basis I have made these Mexican meatballs without chilli and suggest that a selection of chilli sauces (ideally Mexican) is presented at the table – this will save the hassle of cooking with chillies and risking too much spice. Of course an alternative idea for adding extra heat after cooking is to present chopped chillies at the table and let the diners decide how hot they want their meatballs.

1. Cook the rice. Use the rice and recipe that you like. I’m using short grain rice – i.e. rice sold for risotto or paella or for sushi – and then cooking it as normal. It becomes a little sticky which is just what you want when there are kiddies around. But adults seem to like it too. Measure by volume, one full big mug for four people one full smaller mug for two. Rinse in a strainer, put into a pan and measure one and three quarters of the volume of rice as boiling water. Simmer at lowest heat with the lid on for about 15-20 minutes and then turn off the heat. Leave with the lid on for 5 – 10 minutes.

3. Cook the meatballs. Fry these in a large frying pan on medium high heat. Turn and toss to brown all over (taking care not to burn the pan) – about 5 to 7 minutes.

4. Make the sauce. Chop the onion and garlic and put in a pan with the olive oil and fry on a medium heat for about 5 minutes without burning. Add the cumin, oregano, bay if using, and stir for a minute. Add the passata and stock and bring to a boil. Reduce the heat and simmer gently with the lid on for 10 minutes. Lift the meatballs into the sauce leaving any fat in the pan. Strain off most of the fat and then deglaze with a little boiling water to release the residues – add this to the sauce. Simmer the meatballs in the sauce for 5 minutes – adjust the seasoning. If they look dry add more water or stock.

5. Assemble. Serve the meatballs with the rice and the vegetables. Add any of the accompaniments that you like or are to hand.

For dessert, why not try Dad’s Mexican Chocolate and Chilli Flan!

We want to see your cooking creations too, whether you’ve tried out one of our Dad's recipes or made your own share with us using:
#whatdadcooked
Monday, November 4, 2019

A Sicilian specialty made with chickpea flour. I’ve made my variety using lemon-scented basil flowers from Casanova and Daughters of Covent Garden.

Caponata is a Sicilian specialty. I’ve adapted the recipe to include basil flowers scented with cinnamon.

Sicilian Anchovies at Casanova and Daughters

A lovely memory of a Seven Dials gem.

It's cold outside and so here's a autumnal warmer! 'Bangers ‘n’ Mash – Spanish Style with Butternut Squash Mash'. R… https://t.co/4bAyO50pJc