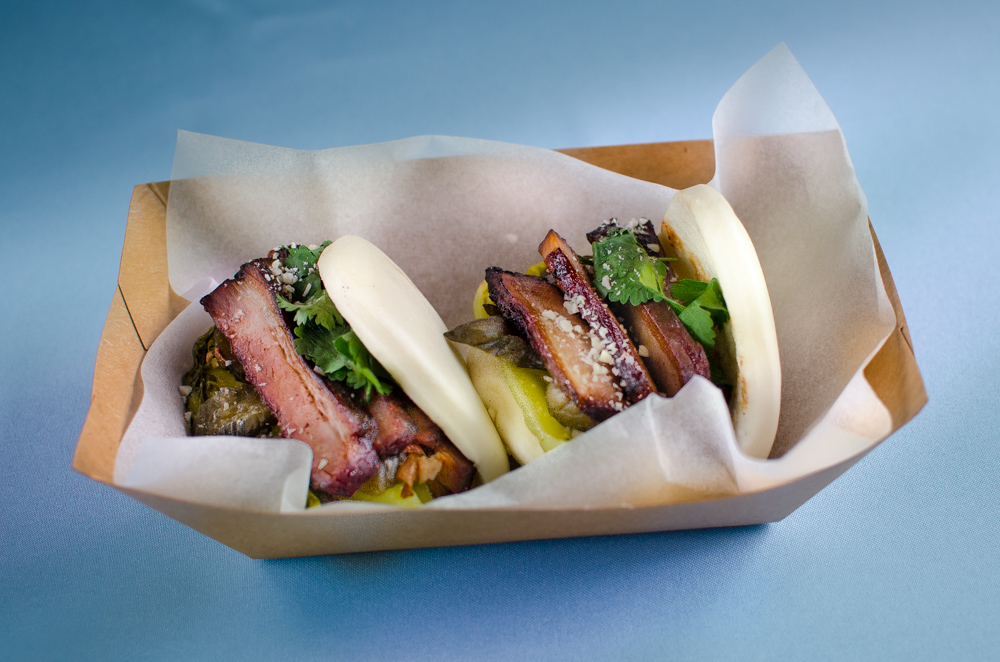 The gua bao bun is a Chinese snack that could be latest food sensation on the streets of New York, London and cities around the world.  The gua bao – or just bao – originates from Taiwan and is sometimes called a ‘Taiwanese hamburger’ or even ‘tiger bites pig’. Neither name flatters the product, but each helps to visualize the snack: a bit like a hamburger with buns that are hinged on one side and appear like a mouth biting down on their filling.

Bao Soho, part of a Taiwanese group of food outlets in London, specializes in the bao bun and offers six varieties, including confit pork, lamb shoulder and fried chicken. They also offer a filling of fried Horlicks ice cream, which demonstrates that you can put just about anything inside a bao. However, most people opt for the classic filling of char sui barbecued pork, pickled mustard greens, coriander and peanut powder.

Flesh & Buns, a Japanese-style restaurant in Covent Garden, has built their reputation on the gua bao bun. The overt use of a Chinese specialty in a Japanese restaurant seems unusual, but makes sense given the influence of the local cuisine during Japan’s colonial presence in Taiwan. Today in Japan, the bao (also called hikara) is very popular in ramen bars.

While food entrepreneurs spend fortunes on devising the next finger-friendly street food, we might wonder why the bao bun has taken so long to become established. Perhaps the answer is in the bun itself. Those who make bao buns, or even cook ready-made frozen buns, will know that they’re very delicate and temperamental objects, requiring careful handling and precise steaming. Perhaps their fragile nature is a challenge too far for the rough and tumble of street food markets. Some liken the bao to a marshmallow, because just like a marshmallow, it can be dry and crusty, light and fluffy or even a little sticky and squidgy. However a bao bun prepared well and cooked to perfection is a delight – soft and tender and a pleasure to eat

Bao – or baozi – also refers to the idea of all steamed yeasted buns, includinge the gua bao. There are many types, made in different shapes and sizes and stuffed with sweet and savoury fillings. The smaller bao are more like dumplings, a favourite in dim sum restaurants, others are much larger. Some are deep fried, while other can be smooth and round without fillings. The character Bao, in Pixar’s animated short of the same name, is decidedly of the smaller dim sum type – the little character’s twisted tuft of hair reflects the twists in dough found on the top of most bao, a practical feature necessary to seal-in the filling.

Some say the bao bun is taking over the world, a claim clearly exaggerated for effect, but there’s still no denying the bao is a trending food concept. So let the bao have it’s day, it’s a fine snack and a welcome addition to our diverse food scene…

This recipe needs a few ingredients. But it’s one you will want to make again, so make a trip to your local Oriental grocers, in particular try to fine the jars of red fermented bean curd that gives the pork it’s natural red colour. I’ve used frozen buns to speed things along. The recipe can be made with fillet pork or belly of pork, or a from strips from a larger joint of pork shoulder. Belly of pork will need longer cooking – cook long and slow at a low temperature then turn up high to brown.

2. Marinate the meat. Put the pork in a bowl and pour over the marinade. Marinate for four hours or overnight.

3. Roast the meat. Preheat the oven to 180°C, Gas mark 4. Place the meat on a rack in a roasting tin. Roast for 30 minutes, basting often with the marinade.

4. Steam the buns. Using a bamboo steamer or similar, steam the buns for about 15 minutes (or according to instruction on the pack).

5. Make the gua bao. Slice the pork and fill the buns with pork, the pickled vegetables, coriander and peanut powder.