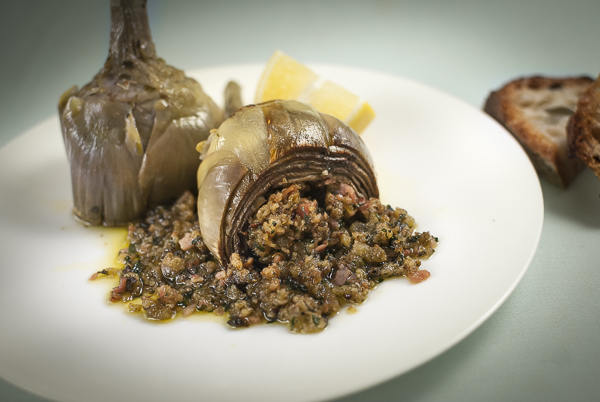 1 tender celery stalk and its leaves

We’ve been enjoying large globe artichokes through the summer. It’s difficult to ascertain exactly where these sturdy bulbs are grown  – suppliers seem to hide their provenance – however, I suspect they are grown in Spain or France. There is a noticeable artichoke drought for a couple of months at the end of summer until November, when the first Italian artichokes start to appear. These Italian types are smaller varieties, either quite slim and spiky, such as the Tema, or shorter and rounder such as the Romanesco or very small Violetta. These smaller types are in season through to early summer, when the larger globes come back in season.

The Artichokes I found at Kingston market were possibly Romanesco. They were soft-leaved with a small heart and very little choke. This makes them perfect for stuffing and cooking upside-down in a large pot in the Roman style. The River Cafe uses a stuffing of parsley, mint and garlic. Perhaps not surprisingly, most other online sources cite the same ingredients. However, the proportions of stuffing provide only a subtle nuance of herbal and garlic flavour – a reasonable approach, given how the maxim, ‘less is more’ is so often applied to Italian cooking. But I think the stuffing provides an interesting additional element to the dish, so I tend to improvise a generous stuffing made with Parma ham, mortadella, or cooked hams and bread crumbs. However, what should not be tampered with is the method of cooking. Water and oil cook the artichokes, the water both braises and steams, leaving the oil which stews and then fries before forming the basis of a delicious sauce.

1. Make the stuffing. Finely chop the shallot, celery, garlic, ham and herbs. Mix these with the breadcrumbs and season with salt and pepper.

2. Make aciduated water. Fill a large bowl with a litre of water and squeeze over half a lemon. Lemon – or vinegar – will help prevent the artichokes oxidizing and discolouring. You can also rub your fingers in lemon to prevent them discolouring too!

4. Stuff the artichokes. This is a little messy, but it doesn’t matter. Push as much of the stuffing as possible inside the artichokes down into the heart (not interspersed through the leaves). keep any remaining stuffing to one side.

5. Cook the artichokes. Place the artichokes with the leaves facing down into a large pan such that the artichokes fit snugly without falling over. Scatter over any remaining stuffing. Pour a generous amount of olive oil in the pan do a depth of about 15mm – 20mm. Then pour in enough boiling water to reach the base of the artichokes. It’s difficult to be precise here – much depends on the size, trimming, type and age of artichoke. Put a lid on the pan and bring the liquid to a boil, then reduce to a simmer and let the water cook and steam the artichokes, as it evaporates the oil will them braise the artichokes. Check the cooking with a thin sharp knife by prodding the base of the artichoke to test for tenderness – add more water if necessary. The aim is to have a tender artichoke with a caramelized base. The final part of the cooking needs to be done with a watchful eye, ensuring that the base browns without burning – add more oil if necessary.

6. Serve the artichokes. They can be eaten hot, cold or at room temperature. Serve with plenty of lemon and crusty bread. They will keep for several days in the fridge – and in fact, are better for it.