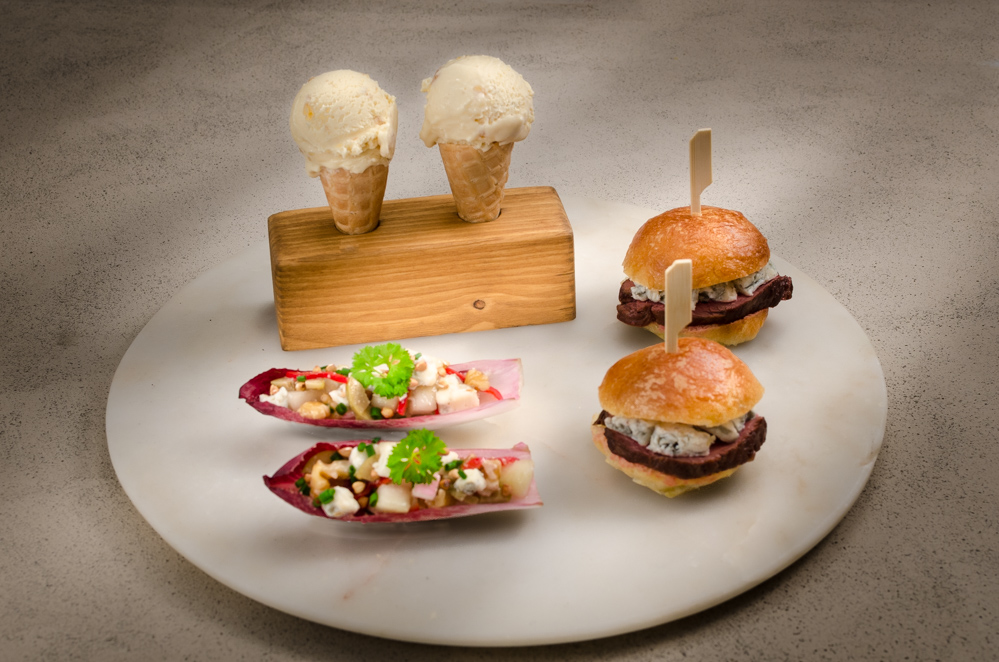 Nice round chunk of fillet steak

Brioche recipe – not too sweet

You may wonder why I thought it would be a good idea to make gorgonzola ice cream. It’s a fair question, but in fact, there is a simple story behind the madness. I was visiting the recent Taste Food Festival in London and came across Tosi Gorgonzola. They were offering spoonfuls of their very young dolce gorgonzola. I was amazed by the lightness and creaminess of the cheese – my first thought was it tasted like ice cream. And that was the beginning of the idea…

In truth, gorgonzola does not taste of ice cream – both may start out as milk, but that is just about the limit of their shared attributes. Ice cream is neither fermented nor treated with molds and bacteria. All cheeses go through a ‘sour’ milk and coagulation stage – something that would be anathema in ice cream but is an essential part of the cheese making process. So there are plenty of reasons why ice cream is not made with cheese – at least a blue cheese…

However, I’ve used the idea of savoury cheese and melded it with a tart sweetness in the ice cream – rather like a frozen cheese board. The result is a creative canapé – served as an hors d’oeuvre – an amuse bouche that plays with expectations and surprises the palate.

The secret to making ice cream work with gorgonzola is to pack the ice cream with things that gorgonzola likes: sour fruit such as apples and pears, or sweet honey – as in the Spanish way with cheese and honey – and finally bitterness which is provided by walnuts. I’ve kept vanilla out of the picture.

I tasted the desert and immediately realized the error. I looked across the room to see Mrs WDC smiling and happily eating this strange melange. When I decided to enlightened her regarding the obvious mistake – she insisted the ice cream was actually really good. What is more surprising, is I now know my gorgonzola ice cream also goes with raspberries!

So anyway check out my Tosi Gorgonzola Canapés below! If you have any other suggestions, drop us a message below!

Despite my assurances in the story above that this is indeed a tasty ice cream, I can’t imagine anybody wanting to make it – except perhaps commercially, in which case I am happy to provide the recipe for a fee. If you are determined you can cheat (as I did the first time I made it): allow a tub of ordinary dairy ice cream to soften, add cheese, puree, honey and nuts to taste, re-freeze. Otherwise, follow a recipe for strawberry ice cream and replace strawberry puree with apple and then add the other ingredients to taste and freeze. Making the ice cream from scratch has the benefit of amalgamating melted cheese into the ice cream mix.

These are brilliant. Blue cheese goes with steak. They share a certain tang and minerality – each element balances the other so that the cheese does not become cloying and the steak does not become overwhelmingly rich and meaty.

If you do not want to make your own brioche mini buns, cut rounds of bread. You could cut ready-made burger buns but make sure you turn the scraps into breadcrumbs for later use to avoid waste.

For the brioche I used half a recipe. The trick is all in the shaping of dough before the final raising – not straightforward as the dough for brioche is wet and sticky. I tried several methods, all started with making quenelles of dough using two spoons. Some I left as they came off the spoons, for others I molded into small balls using wet hands and with others dry floured hands. Some I tried billowing into puffs of dough with my fingers, rather like making mozzarella. Floured hands work best but leave a slight texture on the bun – blow or brush off as much as possible before adding the egg wash. Otherwise, try a piping bag – but it should be noted that little flicks and tufts of dough may not smooth into uniform domes.

For the fillet, fry evenly on a very hot pan (cloths, lids and fire extinguishers at the ready). When well-browned – if not charred – reduce the heat to let the internal parts of the meat cook slightly (we are after a very rare piece of meat). Prod the fillet with your finger, when it begins to show a little resistance, take off the heat and wrap tightly tin foil and allow to cool, before storing in the fridge. To assemble cut the buns in half, add mayo to the bases, add slices of beef, season and top with cheese. Serve with a little stick, cut down by hand.

Well, not strictly a Waldorf but but the concept is simply to place something like a Waldorf in lettuce or chicory leaves and serve as a canapé. Essential is gorgonzola, apple or pear, hazlenuts or walnuts. Chop and slice ingredients to suit, dress, mix and place in chicory leaves. Although these are a little fiddly, they are not hard and would work well for any kind of dinner party. Chefy types may want to improve on my presentation – fewer elements in a stricter pattern would be more creative.