‘I’m not a big breakfast eater, mainly because I don’t have time! But on the weekend I actually have some time to eat… around 11AM :). Since Dad’s latest Time Out article on Clerkenwell Rd, he got inspired to create this Corned Beef Hash recipe after visiting Tongue & Brisket. I’m glad he did, because it’s my new favourite breakfast! With loads of ketchup all over…’ 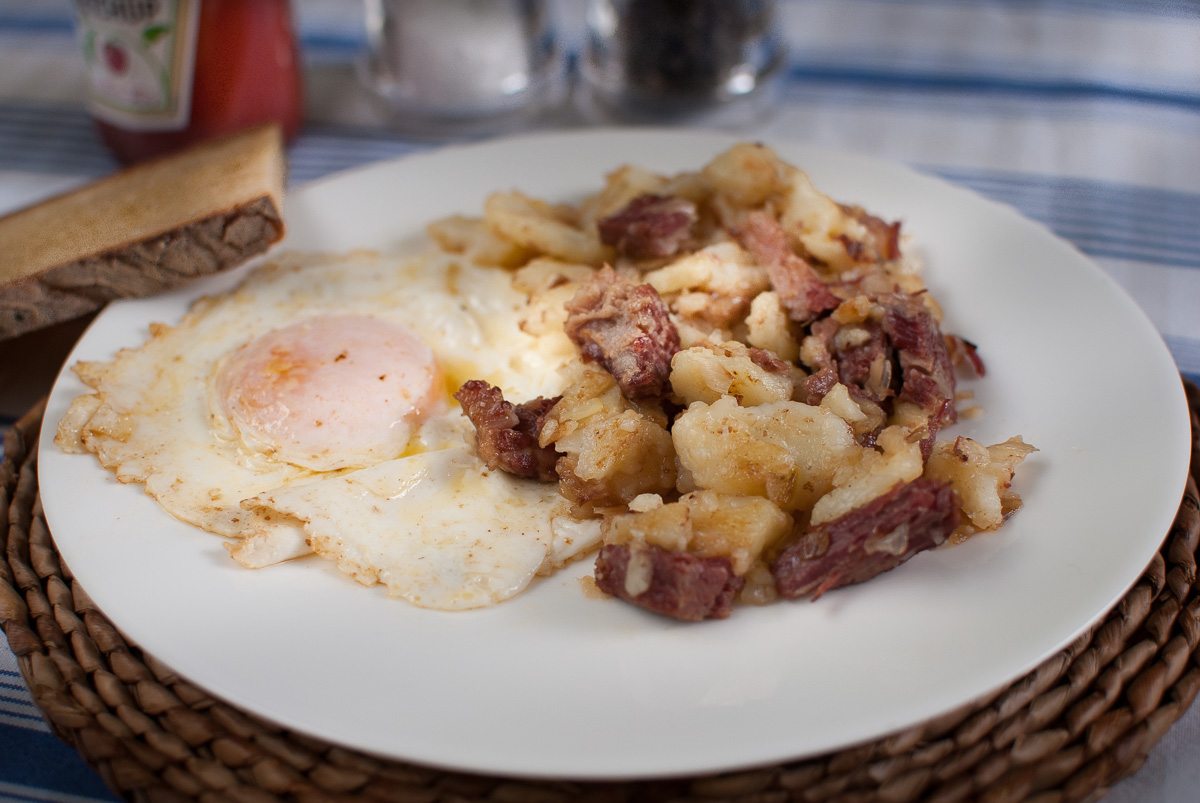 Corned beef will bring emotive memories to most people of a certain age in the UK. For some it’s a reminder of harder times, when fresh meat was scarce and expensive. Others will scoff with disdain, dismissing corned beef as inappropriately crude for the modern table. Yet for many it might bring back fond memories of school dinners featuring Spam and corned-beef salads: happily consumed at the time, but now safely tucked away as historic aberrations.

Americans often associate corned beef with the ‘flophouse’ where it provides a welcome (and economic) dish of sustenance. The connection to poverty is also seen in the rural poor of the Southern States where Corn Beer & Hash is a tin-can staple. As the meat is conveniently preserved in a tin can, the product has also become an essential addition to the survival larder of campsite and barrack. As a child growing up in America, we would often eat corned beef hash – there was no shame – we just liked to eat it. Indeed, most Americans are partial to corned beef hash. They recognise its origins in the homely New England breakfasts made of leftovers.

Corned beef hash (or ‘corn beef’ hash as Americans like to say) is considered an American standard – a classic even. In fact, it seems to be enjoying a ‘posh nosh’ transformation. As Julia Moskin explains in her article for the New York Times, ‘The humble plate of hash has nobler ambitions’, hashes of all types are appearing on high-class restaurant menus across the land, including the Michelin-starred Longman & Eagle in Chicago. Even Christopher’s, in London’s Covent Garden includes corn beef hash on its menu – and Christopher’s is a restaurant at the higher end of the dining scale.

One clear distinction between American and British appraisals of corned beef is that Americans have a predilection for ‘corning’, or curing, their beef as whole joints – usually brisket. American cooks can buy these cured joints direct from supermarket or deli. This type of meat is known as ‘salt beef’ in the UK and is the joint used in the making of salt beef sandwiches. The lineage of this corned beef traces not back to the ‘bully beef’ of South America, but to Eastern Europe, where Jewish methods of salting and curing were developed and introduced into the USA. (Smoked and seasoned versions of the brisket produce pastrami.) These cured whole joints of meat are far superior to the minced beef that gets processed and packed into the distinctive tapered oblong tins.

Making a hash is easy for any cook, whether at home, on a campsite or in a restaurant. By definition it can’t go wrong. However, if you make the corn beef version of hash try to find a supply of real salt beef. I got a large piece to ‘take away’ from the Tongue & Brisket in Leather Lane. The hash was excellent – I’m not saying it’s haute cuisine, but it’s certainly good enough for our table…

Some notes on corn beef hash:

How to make corn beef hash

Prepare the potatoes. Wash peel and chop the potatoes into chunks. Put in a pan of cold water and bring to the boil. Cook until just tender.

Start to fry. Peel and chop the onion finely and add to a large frying pan. Heat a large frying pan on medium-high heat and add a little butter and olive oil – then add the onion and saute the onions gently for 10 minutes.  Add the potatoes and corned beef and stir to mix. Turn the heat up slightly and fry until the potatoes and corned beef are well cooked and starting to catch and brown.

Serve. We would not think of serving this hash without eggs (it is for breakfast after all). My favourite way to cook eggs is over-easy (cooked mainly on one side and then turned briefly to give the yolk a quick cook. Leo prefers sunny-side-up, Mrs WDC will always have poached if being offered. My mother used to cook her eggs in the hash, making indentations and putting on the lid – a variation of her ‘fried-then-steamed’ style of cooking eggs. Each to our own, especially when it comes to eggs…

Some other breakfasts you might enjoy: Huevos Rancheros, The WDC Raclette Egg Toast, WDC Sausage &#038; Egg Muffin or even an Orange Polenta and Syrup Breakfast Cake