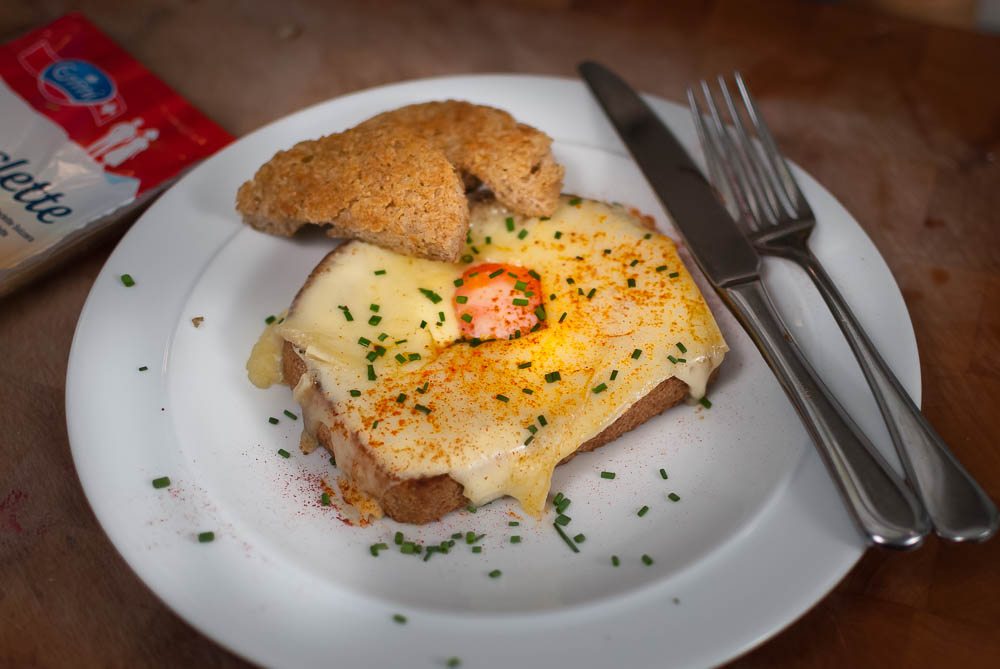 I’m watching Russel Norman on a Saturday morning cooking programme. Earlier in the week I was sitting in his London West End restaurant, Spuntino. I was there for the stuffed fried olives – a chef friend’s recommendation. Naturally, I was interested to learn about the man behind the growing Polpo empire and his Spuntino signature dish: truffled egg toast (a thick chunk of bread topped with melted fontina cheese surrounding egg yolk and drizzled and with truffle oil).

I’m inspired to make something simpler; a breakfast dish that does not require a preheated oven, a white loaf of bread – or truffle oil. I also want to use a whole egg – not just the yolks.  I’m reminded of the ‘frog in a hole’ or ‘egg in a basket’ type constructions that we cooked for the boys when they were young, as well as a croque-madame (cheesy-toast with egg). My raclette egg toast combines all these ideas.

You need a sandwich-type loaf of brown bread, raclette cheese (or fontina or any good melting cheese including mild cheddar) and a circular cutter.

Turn on the grill at high heat.

Then butter both sides.

Fry each side in a non-stick pan on a medium- high heat until lightly browned.

Take the toast out of the pan and put it on a board. Cut a circle disc out of the middle of the toast (stand the disc up so that it does not steam and go soggy).

Put the metal cutter and toast (together) back in the pan. Add a small knob of butter into the ring and add a medium egg, preferably one with a deep yellow-orange yolk. Let this cook for a minute. The reason the cutter stays in the toast is to prevent the egg white from leaking under (and into) the crisp base of the toast. After two minutes take of the heat and remove the ring.

Stack thin slices (or grated) raclette – or other cheese – around the edge of the toast without covering the egg-hole.

Put this under the grill until the cheese has melted and the egg is cooked. The knack is not to overcook or undercook the egg (you could always protect an over-cooking egg with the disc from the egg-hole – or make a little tin foil hat).

Sprinkle with bitter sweet paprika and chopped chives. Cut the disc in half and arrange with the toast.