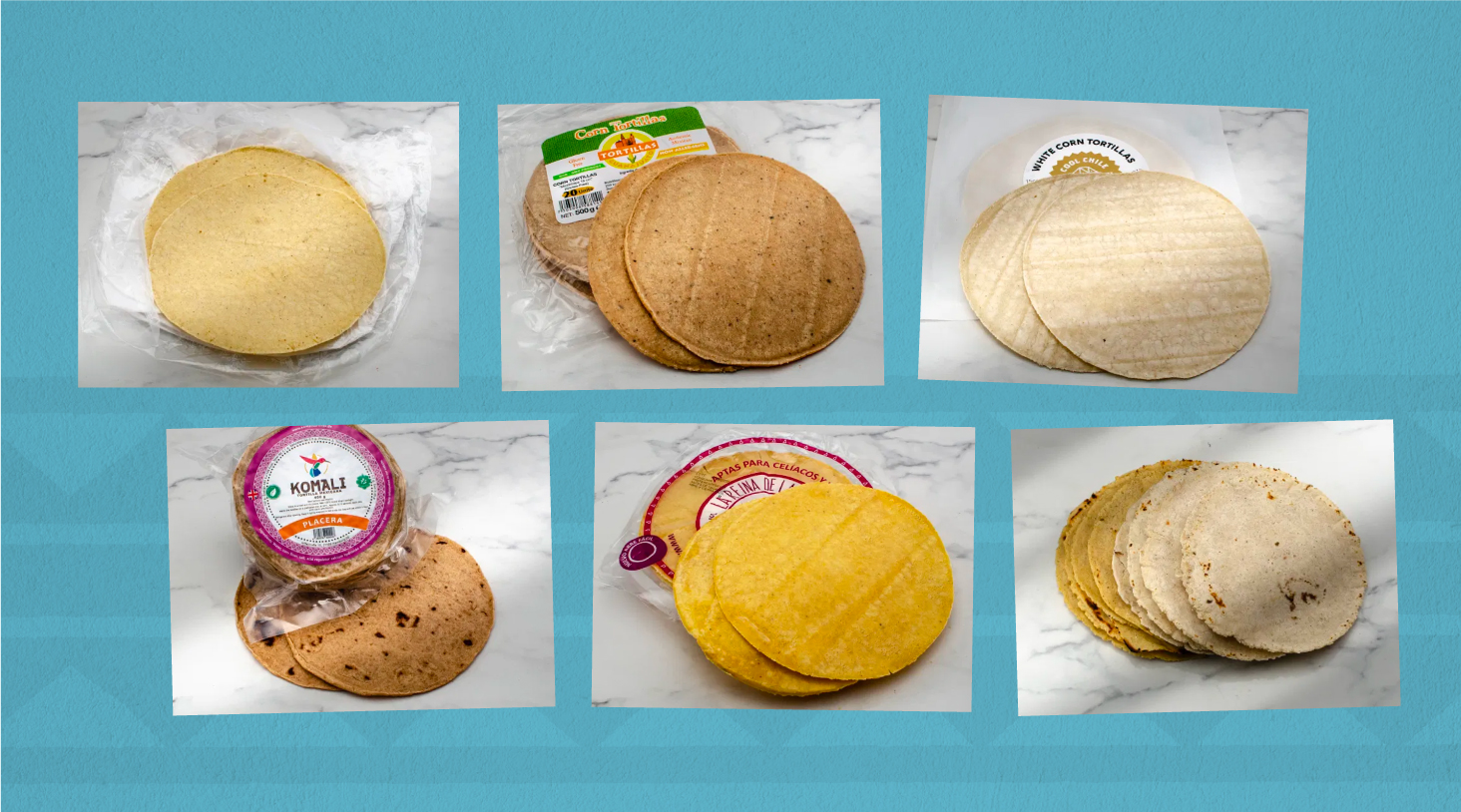 At the heart of Mexican cooking is the tortilla. A proper Mexican tortilla. Therefore, I thought it would be worth checking out what is available here in the UK.

Mexican products have been available in the UK since the 80’s. Old El Paso were the first, but over the years others have joined in such as, Santa Maria, Luchito, Wahaca as well as supermarket own brands.  The tortillas are soft and can be anything from a large flour wraps, to thick and puffy smaller flour tortillas, to strange yellow, pasty flour and corn tortillas – none are anything like an authentic Mexican corn tortilla, so I have not tested or compared any of these brands.

In Mexico, a tortilla means one thing: a round unleavened flatbread – either made with fresh ground corn (masa) or dried corn flour (masa harina). It comes any size and can even be blue (made with blue corn). It’s true that some parts of Northern Mexico make large flour tortillas, but otherwise Mexican tortillas are made from corn.

To find proper Mexican corn tortillas, you will have to shop online. But why? Why can’t we buy 100% corn tortillas in our supermarkets (it’s not as though UK consumers do not have a taste for Mexican food)?

I believe the reason is that the corn used in a real Mexican tortilla is simply not to European tastes.

Mexican corn tortillas are made with fully ripened field corn (not sweetcorn). It is then nixtamalized in a process that slakes the corn in lime before grinding, or drying for flour.

The ancient Aztecs soaked their corn in alkali and the methodology has remained largely unchanged in Mexico (though now the alkali will come from calcium hydroxide rather than wood ash). The process is safe (the lime is rinsed away and heating neutralises any remaining alkali) and can be seen in some modern food preparations, such as pretzels and olives.

There are many benefits to the treatment. It makes the corn easier to grind, improves its nutritional value, reduces pathogens, stabilises the corn (for easier storage), allows the corn to be made into a dough, and perhaps the most importantly it gives the corn a distinctive taste.

For Mexicans, and tortilla aficionados, the taste of a tortilla is everything.

However, describing the taste is difficult: it’s not corn in the way we understand sweetcorn. It definitely tastes of a bread-like grain and it tastes very earthy. The texture is good, chewy, and easy to digest. Then there is that je ne sais quoi, something exotically musty, sweet and perfume-like.

The early European colonists of the Americas didn’t like the taste and although they brought the corn back to Europe they left the nixtamalization process behind.

It seems that nothing has changed in 500 years.

I shop online at Mexgrocer, Cool Chile and Mextrade  so I have only compared the tortillas available with these retailers.

There is a big difference between types of tortilla. Perhaps the most obvious is that the maize used for tortillas, which can be white, yellow, or blue. I have not commented on these differences because by all accounts there is very little distinction in the taste.

Tortillas come in different sizes. I prefer 15cm, which is a good size for making tacos – neither too big nor too small. The 10cm size is good for making tostadas or small open appetisers. There is also a 12cm size, which is sometimes referred to as a ‘street’ taco. I have never encountered a taco of this size on the street, but the size might be useful for putting in smaller baskets for keeping warm. Cool Chile also make tortillas in 6cm and 20cm.

Mexican corn tortillas are always gluten free, because there is no gluten in corn.

Apart from these obvious differences, there are three other key distinctions. Tortillas can be:

All the tortillas have a nixtamalized taste, some a little more or less than others.

(Yellow) Corn tortilla Mextrade (made in the UK)

A relatively new entrant into the market operating in Sutton, Surrey. Mextrade make fresh tortillas and dispatch on Mondays and Tuesdays. They don’t say if they are yellow or white tortillas, but I deduce that they are yellow, as they say their masa harina used to make their tortillas is yellow. Compared to Cool Chile they are quite yellow-ish. The tortillas come with a few burnt flecks, so look appetising and authentic. The tortilla is soft and pliable, easy to eat with a good texture and chewy bite. Good level of nixtamalization taste. I’m sure you can taste the corn.

Where to buy them: Mextrade

Guanajuato were one of the first imports of Mexican tortillas, and the brand I would always buy. Guanajuato, have a very wide range of tortillas, including blue tortillas, green cactus flavour tortillas, and a special tortilla for frying. Recently, they introduced a standard tortilla called ‘MexWraps’. When I bought my tortillas for this test, Mexgrocer had sold out of the Guanajuato white tortilla – the type I usually buy. It may be that with this new tortilla, the company is trying to emulate the success of the Komali tortilla which is quite brown. I detect a little more nixtamalization taste in both the tortillas. The ‘MexWraps’ texture is rather crumbly, grainy, and brittle. It tasted of neither corn, nor flour, and I found it a bit too earthy – almost muddy. I would buy the white version of this tortilla instead. (Although the ‘MexWraps’ did make good totopos.)

Where to buy them: Mexgrocer

White corn tortilla Cool Chile (made in the UK)

Cool Chile has been operating for a while in the UK market and trade at Borough Market in London. They make fresh tortillas with white and blue masa harina. They also make an ‘ambient’ tortilla which includes preservatives so has a longer shelf life. Their tortillas are good. They are very pale without spots and they taste perhaps the most bread-like of the tortillas I tested. They are very soft, smooth, and easy to chew and eat (without being pappy). Good level of nixtamalization taste.

Where to buy them: Cool Chile

Komali Tortillas from Mexgrocer (made in Germany)

Komali are the new kids on the tortilla block. There seems to be a desire to make a product that feels ultra-authentic. But I wonder if this is not fantasy, as I do not believe that any authentic Mexican taco can be so brown. (Corn does not have a ‘wholemeal’ variant). These must be made with yellow corn flour and then tweaked with added colour. That said the tacos are very satisfying to hold, to cook with and to eat. It feels like an artisan bread version of a tortilla. The texture is good, bread-like, and quite thick. It has perhaps the highest nixtamalized taste. Mrs WDC’s favourite.

Where to buy them:  Mexgrocer

I have been buying these for ages. There is something very appealing about the packaging and the colour of the tortilla. The company make yellow and white corn tortillas, I have not tried the white as I have not seen them in this country, though you can have them sent from Spain – they look good enough to pay for the delivery… The yellow tortillas are very yellow – perhaps helped along with some colouring – still, they do have a good corn tortilla taste with not too much nixtamalization. However, I find that they do not survive the long-life processing as well as other brands. They are a little flaky and crumbly, if not a little dry and tough. That said I would not write them off, they are still a good corn tortilla – perhaps increase the amount of moisture before the warming process.

Where to buy them: Mexgrocer or for white tortillas La Riena de las Tortillas

These are simply delicious (even though I say so myself). It’s not me. It’s the flour and the fact that they are as fresh as we can make them in the UK. They are worth the extra time and effort. I’ve used two flours, one from Mextrade and one from Cool Chile – both say their flours are the flour used to make their commercial tortillas. Mextrade is yellow masa harina and Cool Chile white. Both taste great, they are soft, subtle, and easy to chew. You might think you are eating any normal non-leavened flat bread without a crust. Both have a good level of nixtamalized taste. Both are excellent flours and make good tortillas.

My conclusion is that any one of the tortillas mentioned here will provide a decent impression of a real Mexican corn tortilla. For a really authentic tortilla, you will need to make it yourself (see below), otherwise, fresh commercial tortillas will generally be better than the long-life versions – store any you can use right away in the freezer. The same applies to the long-life versions once the pack is opened.

NB: How to make home-made tortillas with masa harina

The way to make homemade tortillas is simple but does require some specific kit, namely, a Mexican tortilla press, two cast iron pans (or one non-stick and one cast iron) and ideally a plastic tortilla warmer. You will also need masa harina, Mexgrocer sell a few brands and varieties.  I would start with the classic white Maseca for tortillas. However, Maseca only comes in 1kg bags which will make a lot of tortillas, as mentioned above masa harina can also be bought at Mextrade (yellow) or Cool Chile (white) in smaller sizes. The other retailers mentioned above should also stock masa harina brands, such as the Mexican Naturelo brand from Sous Chef. Don’t fuss over the brand, because the differences will be marginal and all will be a big improvenment on non-home-made…