The chipotle is a dry smoked jalapeño chilli. Use it dried to add smoke and heat to your food. Or try it in an adobo, a sauce-like marinade, then blitz a spoonful in some tomato puree and you have a good basis for a Mexican chilli sauce. 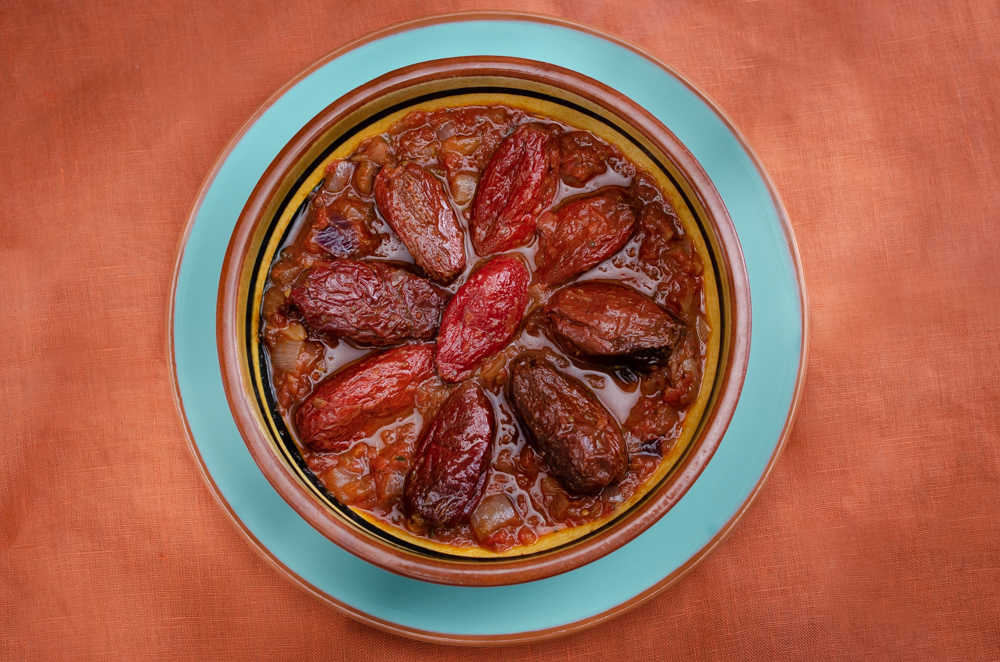 When did the chipotle become such an enigma? Have you noticed how this particular chilli has become the most talked about and popular of all Mexican chillies? What is it about a humble, dried jalapeño that intrigues? Unlike many chillies, such as the Scotch Bonnet, or perhaps even the deadly Carolina Reaper, it’s reputation is not based on heat; the chipotle by comparison has a moderate heat, at 50,000 units, it barely climbs above the bottom of the Scoville scale.

Yet the chipotle still gets star billing. Why, when just off-stage there is a host of attractive contenders? Take the famous ancho; does this ubiquitous chilli not impress with its sultry sweet and smoky notes. What about the pasilla, the chilli world’s ‘little raison’, deliciously mild and sweet – and very fruity. Then there’s the bright red de arbor, vibrant in colour and potent in flavour. The cascabel, is a darling, plump, rattle of a chilli, mildly hot and a bit nutty. Playing the supporting role in many moles is the tobacco-scented mulato, a chunky and wrinkled old-timer but boasting a fragrant bouquet of liquorice and cherries. The smooth and shiny guajillo is tough-skinned, but oozes accessible charm with its mild heat. The petite piquin may be small, but with its racy spice it will perk-up the dullest of hot sauces.  Last, but not least, there is the ultra-hot habanero, the initial scorching heat will knock you flat, but its fruity aftertaste will have you standing, wanting more.

Then of course, there is the chipotle. It’s name is derived from the Nahuatl, meaning chilli and smoke, and to be fair this is exactly what you get in a chipotle: chilli and smoke. But as we can see above, it delivers about the same flavour profile as an ancho. NB: The smoke in both these chillies is derived because the jalapeño and poblano (in the case of the ancho) do not dry well without being encouraged with a little smoky heat.

Perhaps there is something in the name? ‘Chipotle’ is unlikely to be a random choice name for the eponymous and now widespread chain of global Mexican eateries. Could there be something in the particular sequence of letters and sounds in the word ‘chipotle’ itself? Rick Stein, the TV chef and food presenter, in a programme based on his travels through Mexico, says that part of the joy of being in Guadalajara is the sheer pleasure of saying the word ‘Guadalajara’. Indeed, one of the most recognised of Mexican songs could derive its popularity from the constant repetition of the word ‘Guadalajara’.

I think ‘chipotle’ has a similar aural appeal – its intrinsic balance of syllables, vowels, and consonants create a fluid and satisfying resonance in the mouth and click on the tongue… Just as the hyenas in Lion King, revel in the utterance of their feared master’s name, ‘Mustafa’, and Tony in West Side Story is convinced that all the beautiful sounds in the world can be found in the name ‘Maria’, so perhaps saying ‘chipotle’ can conjure evocative Latin longings, or innate tingling of Mexican memories, ‘chipotle’… oooh – ahhh… (this effect could be enhanced using the more historically accurate and intuitive English pronunciation, chi – poht – ell, rather than the Spanish pronunciation, chi – poht – leh.)

Whatever is at play, attaching the word chipotle to any salsa or Mexican dish will guarantee ‘customer’s favourite’ status on any menu.

My fascination with the chilli derives from its usefulness in Mexican cooking. More recently, I have been reaching for the chipotles when making sauces. Not so long ago, this particular chilli, along with most other Mexican chillies, was impossible to get hold of in the UK. Furthermore, at that time, the flavour of a chipotle did not seem as prevalent as it is now.  I’m often asked: how do I make something taste Mexican? Don’t tell anybody, but I confess my replies are still based on my memory of the ingredient list in a Schwartz chilli powder bottle. The key ingredients appeared to be cumin, chilli, garlic, onion, and oregano. Of course, there is more to any cuisine than is summed up in a single bottle of commercially mixed spices. However, back in the days, Schwartz nailed the common taste notes of chilli.

Now a modern standardised Mexican flavour would include smoke. I’m not sure whether this is because, a wider and more authentic Mexican cuisine is now available, or whether the Tex-Mex influence of American smoked barbecue tastes has infiltrated Mexican cuisine or products. Many chillies are smoked or have smoky tastes, but if you want smoke in your food, the chipotle is the go-to chilli.

However, the smoke is not the whole story, because although the chipotle hangs around the bottom of the Scoville scale, it still packs a huge punch of heat. Too much for most palates. The conundrum then becomes if you dilute the chilli you also dilute the smoke, so cooks, need to use the chilli skilfully and carefully (removing the seeds and veins will help). I suspect that commercial forms of chipotle sauces are somehow separating the smoke and the heat to get a more friendly balance of flavours.

Mexican cooks have a useful way to meld the chipotle’s smoke and heat: chipotles en adobo – adobo being a kind of sauce-cum-marinade. These are widely available as commercial recipes in cans (online in the UK). Rick Bayless, in his Authentic Mexican cookbook, lists at least four different brands, each with their own distinctive take on the recipe. I still find the heat from any tinned varieties I can source, a little too hot…

So, for the final act in my culinary affair with the chipotle, I have attempted to tame the chilli in my own adobo. The results suggest they are still a feisty bundle of heat, however, when homemade, there really is a more defined spectrum of flavour, far more interesting than just smoked chilli. The recipes call for numbers of ‘cups’ of dried chillies, but I have started with 20 individual chillies, which when used one at a time should keep me stocked – and enigmatically intrigued – for quite some time.