Porchetta is an Italian stuffed and rolled pork joint. We know of porchetta from our holidays in Monte San Savino, Tuscany, where on festival days, Aldo, the local butcher, will slowly cook a stuffed whole small pig on a spit over embers. Traditionally, porchetta is served in bread with cooking juices, but at Gastronomica in London’s Borough Market, they layer grilled panni with porchetta, salad and mozzarella – a delicious and very filling lunch. We have it sliced in rolls whilst still warm with salad, and then enjoy the leftovers re-heated with potatoes, carrots and gravy made from the cooking juices. 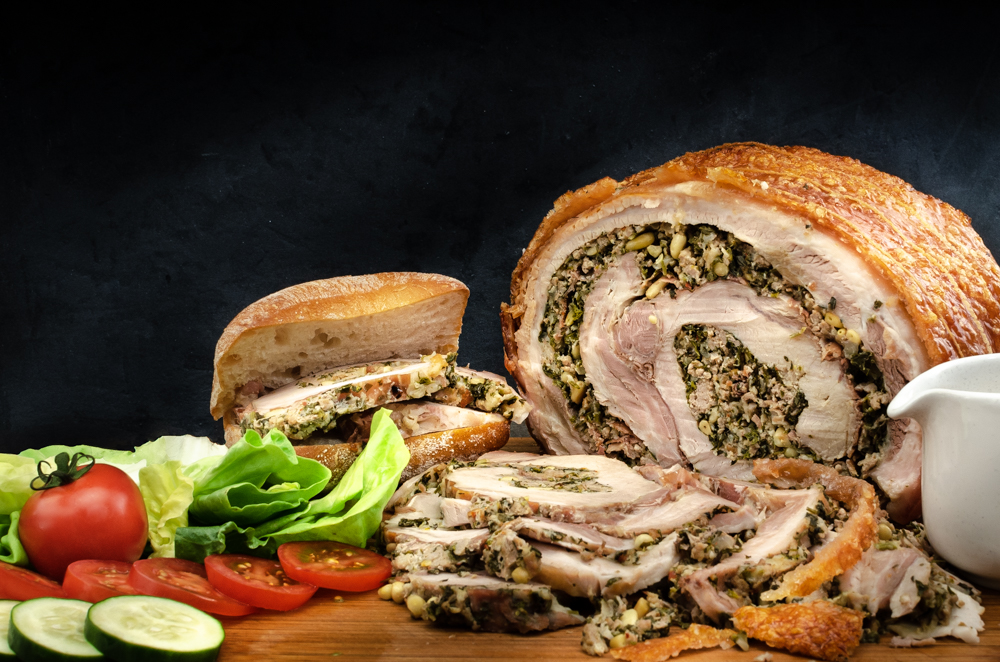 Zest of one lemon

1 bottle of fruity white wine such as Soave

1 bulb of fennel cut into 4

‘Slice of pork in bread’

During May there are many birthdays to celebrate, one in particular came with a luncheon menu request for a ‘slice of pork in bread’, a nostalgic nod to memories of eating pork salad sandwiches. I decided I would cook a porchetta, the traditional Italian rolled and stuffed joint of pork, typically sliced and served in bread (with or without salad). It’s a big and complex joint to roast – not for the faint-hearted, but perfect for a special occasion.

The first task in making a proper porchetta is to order the pork joint; a large and special cut from the belly. Near us are some very fine butchers, including the award-winning Bevan’s. It was there that I recently ordered a Florentine steak (a type of thick T-bone) for a birthday barbecue. At the time the butcher seemed quite informed and not at all fazed by someone ordering a steak ‘three fingers thick’ or talking about standing the steak on the bone over the fire at the end of cooking.

‘I’m Francesco’, said the butcher. Brilliant! I was ordering a Florentine steak from an Italian – what could be better. When I returned to pick up the steak, Francesco and I chatted again. His parting shot was, cook it well, and enjoy the company!

Clearly, Francesco would also know about porchetta, so I put in my order. When I arrived to collect my pork joint I was treated to a demonstration. This was not a simple belly of pork as many recipes specify. This was a piece of art. With great pride, Francesco placed the large rolled-joint on the counter and then impressively unfolded, concertina-style, four joined flaps connected either side to the middle. Even the other butchers stopped to admire the show. We were all looking at a prime specimen of genuine porchetta; bones carefully cut away; the loin still attached. It was a spectacular joint and most skilfully prepared for stuffing and rolling.

Then Francesco said he had a recipe from Rome, if I would like to try it. Of course, and he presented me with his detailed hand-written set of instructions. It’s not every day that you buy a piece of meat together with a personal recipe from the butcher.

The porchetta – and Francesco’s recipe – were wonderful; unfortunately, for various reasons, the special occasion had to be cancelled. Cooking a joint of pork without any guests is rather like playing football in a stadium without any fans, it seems pointless. But a porchetta will never go wasted or unappreciated. We carved it up and distributed portions among the family, we had it as a roast with vegetables and gravy the next day, and later made our traditional leftover pork rissoles. Finally, I put a good piece in the freezer, where sometime soon we may still enjoy a special occasion for a ‘slice of pork in bread’.

This porchetta’s stuffing is adapted from a recipe by Francesco, a local Italian butcher. Although the porchetta is often eaten sliced in bread whilst still warm, it can of course be eaten like any other joint of pork with roast vegetables, such as potatoes and carrots. Eaten as a roast it benefits from a gravy made from the cooking juices and liquids. Francesco uses carrots as a kind of rack for the joint, but of course, they also flavour the cooking liquid and can be eaten if not too soft. I’ve adapted this by adding extra vegetables to make a richer gravy.

There is a debate as to whether genuine porchetta skin is simply crisp, or crunchingly crackled like British pork crackling – we like it quite crunchy. Some suggest not putting oil on the skin before cooking to help the crackling, but I believe the best strategy for creating a good crunchy crackling is to ensure the skin is very dry. Therefore, keep it out of plastic packaging and rest it overnight, unwrapped in the fridge.