A delicious salad of fresh vegetables, typical of those grown in dad’s childhood home. 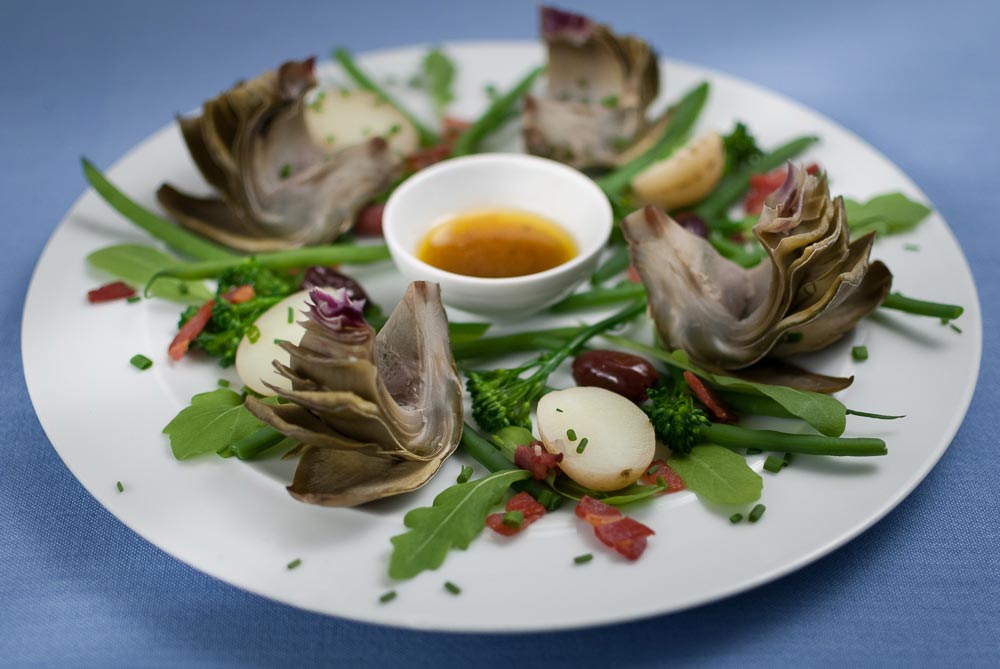 What is Californian Cuisine?

It’s a good question. I’m Californian; and I’m not sure I know. Certainly, I was not aware that we had a particular style of cooking with a label attached. I have lots of ideas about what constitutes Californian food – as I’m articulating in my California Dreamin’ supper clubs – but  I suspect this newly identified style of cooking is a trending phenomenon promoted by the culinary cognoscenti and gourmets of the state. We can assume it’s not a cooking style of the fusion, nouvelle and haut ilk, so is it simply a regional cuisine of America; as in the Cajun cuisine of Louisiana, or Tex-Mex cuisine of Texas and Arizona, or the Pennsylvanian Dutch of the Midwestern states, or the New England cuisine of the original six colony states? If so, it should be easily identified by standout signature dishes, such as Cajun gumbo, or Tex-Mex chilli con carne, or Boston Baked beans, but it seems that Californian cuisine is a little more subtle – the nearest we get to a signature dish is the ‘California pizza.’

Californian cuisine is reported to be a fusion cuisine, influenced by Italy, France, Mexico, the European delicatessens and eastern Asia, where traditional regional cuisines are represented using local ingredients and flavours from California. So a classic Italian pizza will be topped with local Californian garden vegetables and become a ‘Californian’ pizza. Some practitioners of the cuisine reveal a style of cooking that celebrates the bountiful agricultural produce of California.

The vegetable garden of America

The emphasis on vegetables, can easily be lost for Californians. Not just because California seems to be the fast-food centre of America (and birthplace of McDonald’s) but because agricultural and farming activities are hidden behind the other more recognizable activities that the state is famous for: Hollywood, sunny beaches, National Parks, Disneyland, high-tech business or the freeways and sprawling conurbations. So you will be forgiven for missing the fact that California also has a Mediterranean climate and some of the most fertile land in America. The agricultural activity, may slip under the radar, but visit any supermarket, try to escape the aisles of processed and packaged goods, and head for the outside walls where the fresh produce is sold, here is the real treasure of California, an abundance of the highest quality locally grown food. This Californian cornucopia of fresh vegetables is the inspiration for my Californian Salad below and the basis of my understanding of Californian cuisine.

We lived in Monterey, near Castroville, the artichoke capital of the world; further inland, the Sacramento valley, running through the heart of the state, grows every imaginable arable crop including fruit and nuts. In Orange County – our last domicile – there was still the rare orchard of oranges, but plenty of corn and bean fields in the surrounding towns. With the Pacific Ocean forming a coastline along the entire length of the state, there is also an abundance of fresh seafood. We would head down to Newport Beach Pier early in the morning and watch the fishing boats haul up their catches of bonito, striped marlin and calico bass. Further up the coast, our mother would make regular visits to Redondo Pier, where fresh crabs from local pots were cooked in huge vats. The Californian cuisine of our family was based on an amazing selection of fresh produce, simply cooked without too much fussing about. A typical dinner might comprise a large single globe artichoke, with a butter and lemon dressing, or a couple of fresh crabs cracked over newspaper. A Californian version of ‘meat and two veg’ might involve broiled or fried chicken, baked potato (with soured cream and chives) and a corn on the cob dripping with melted butter.

Salad vegetables are plentiful in California and when eating out you will see salads presented, not as ‘side’ dishes, but as a main dish – and not just ‘green’ or ‘mixed’: there’s Caesar, Waldorf, Chef’s and Cobb or Nicoise, Valencian, spring and fall.  Usually salads will feature the ever present avocado and quintessentially Californian fruit (the mother tree from which most Hass avocados are descended, grew in La Habra Heights in California). Sometimes the lettuce is so good you just needed to cut it into a wedge and serve it with Roquefort dressing. In California salads, are refreshing, filling, healthy and tasty. They are mostly vegetables, mostly raw – so easy on the cooking.

And it is true that there was a fusion of cultures in the food we ate. It may be that as the original immigrant pioneers moved westward, they settled in large diasporas bringing their European cuisines with them, but by the time California the settlers reached California there were so many separate cultures, the area became melting pot of culinary influences. Our mother’s favourite takeaways were Giovanni’s Italian meatball submarine sandwiches and  Van de Kamp’s cheese enchiladas in foil trays. Dinner at home often involved teriyaki style cooking or sitting around a hotpot eating sukiyaki with chopsticks. And yes, we did eat hamburgers and hot dogs, but always with German mustard and sauerkraut.

The flavours of Mexico

Of course the biggest influence on Californian cuisine is Mexican cuisine. The clue is in the Spanish name of the state – meaning ‘hot-oven’. The Mexican influence is felt not just in the ubiquitous taco and burrito outlets that line the highways, but in the way that Mexican staples of corn and beans can be found in endless pot luck salads, or the obsession with hot sauces, or in the way that California has adopted many Mexican recipes as their own, such as fish tacos, chilli rellenos or heuvos rancheros – and of course, guacamole, pico de gallo (tomato salsa) and the tortilla chip are never far from the start of any meal.

My citrus slaw on a fish taco is a good example of fusing local ingredients and imported cuisines. The fish is a Californian mainstay ingredient, the taco is Mexican and the slaw is a mix of Mexican seasoning on fresh Californian vegetables. So let’s not be too pedantic about Californian cuisine – after all, it does seem to be about great ingredients, simply cooked but informed by other local cuisines. If in America’s vibrant and dynamic culinary landscape, where a wiener from Frankfurt can become an American hot dog, who knows what new ideas will come from the food of California – perhaps in time we will all be eating Californian pizzas.

Serve symmetrically in four quarters on four plates. Arange a few rocket leaves at edge of plate, scatter a small handful of beans (about 15) and broccolini (about 1 and half original spears) around plate leaving gap in middle, place artichoke quarters at four quarters of plate. Then add potato half and olive in each quarter, scatter bacon, chives, and add little pot with dressing.