‘Oh my, a steak sandwich! Dad always gets great cuts from the delightful family run CD Jennings & Sons. And for the banh mi he used a bavette steak – I’ve learnt over the years, that the bavette is a great cheaper cut but still full of flavour – marinated and grilled on the BBQ… Wow! Dad’s version of a delicious French/Vietnamese street food specialty, served with a yummy broth, lemongrass sauce and a baguette or banh mi! Winning South East Asian flavours, in just just over an hour.’ 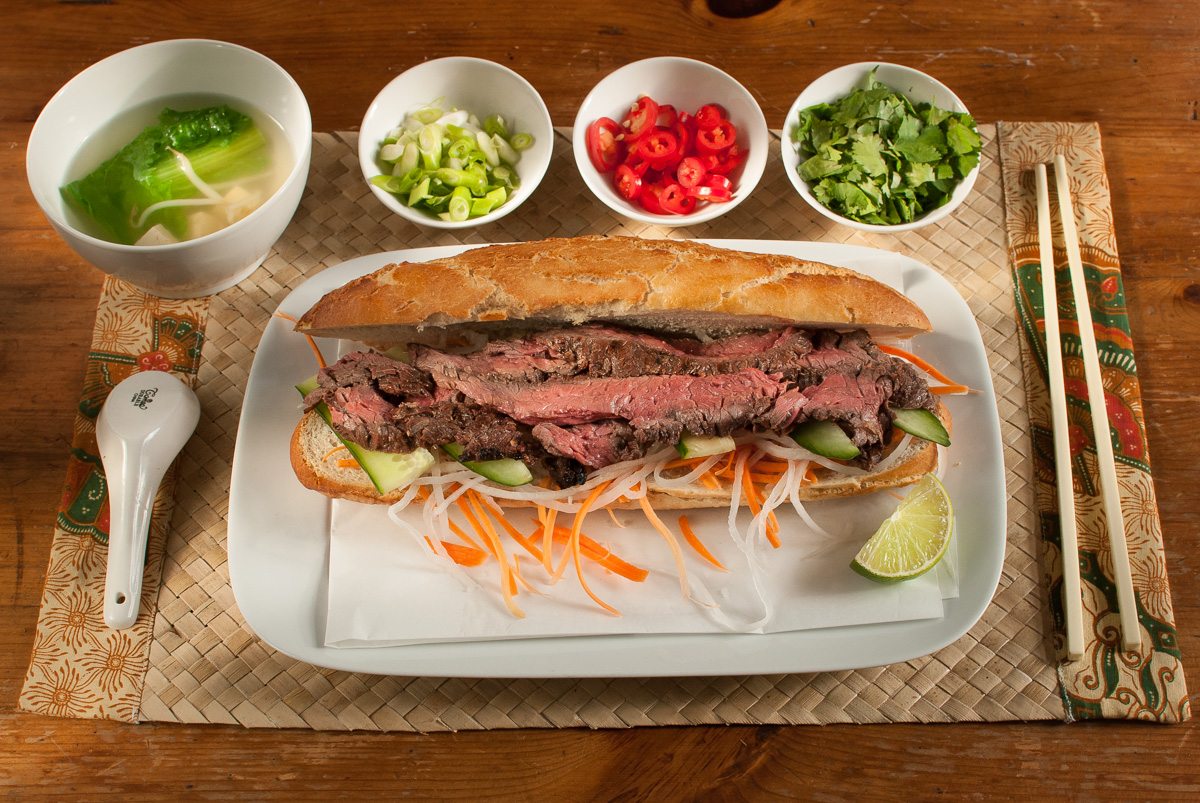 8 spring onions chopped – use some of the green parts

For the lemongrass sauce

Juice of one lime

For the banh mi

1 small to medium mooli or daikon

For the broth (optional)

The Banh Mi Bay in Holborn is a Vietnamese restaurant offering traditional banh mi baguettes at lunchtime. The restaurant says it’s proud to be pioneering the specialist baguette in the UK – and judging by the number of ‘where to buy the best banh mi in London’ posts online, the sandwiches are already well established on the London food scene.

I was at the restaurant recently and ordered a banh mi and bowl of broth. While I was enjoying my lunch I reflected on how French Colonial rule had influenced the Vietnamese food I was eating: broth or pho from pot-au-feu and banh mi from the French baguette. It turns out the origins of pho are disputed, but the idea of exporting a dish of broth to South East Asia seems plausible – the broth would have been a welcome restorative in such hot climes. However, the idea of long French sticks bandied about the streets of Hanoi seems a classic example of a foreign pride ruling over regional sensibilities. Not surprisingly, the Vietnamese baguette has evolved into a bread more at home with the local customs, climate and raw materials – it’s become shorter, more like a stretched roll than an elongated loaf, the dough has become lighter and airy (due to the addition of rice flour) and the crust is now crisper creating a delicate shell.

Of course, in essence, the banh mi is just another sandwich –  one of hundreds from around the world. However, in most favourite sandwich lists the banh mi scores highly. And rightly so: not only does it deserve credit for thriving in South East Asia’s turbulent geopolitics, but it’s an indisputably excellent sandwich.

About the meat: I bought bavette steak for this recipe. It’s from our local butchers CD Jennings & Sons in Surbiton. They also sell a similar cut which they call skirt flank steak. Although both cuts are considered ‘tough’ both are flavoursome, and both will become tender with this style of cooking. The bavette has a looser texture and a slightly richer flavour than the skirt flank – so when barbecuing we recommend using the skirt flank when a very strong marinade and barbecue sauce is being used and the bavette for a lighter marinade and sauce. For barbecuing either joint, it’s important to grill quickly on a high heat and slice the meat very thinly against the grain at a diagonal.

About the bread: Authentic banh mi are hard to come by – Banh Mi Bay sell them separately (worth the trip) otherwise the nearest to the texture of the Vietnamese baguette is a bog standard white crusty roll. Even these are becoming scarce among the rustic pains and brioches. Otherwise, as in the photo above, use a tiger baguette – its larger and heavier than a banh mi, but pretty near in terms of the crust texture. You might want to remove some of the bread inside to make it lighter or cut in half for individual portions…

About the recipe: There are quite a few stages for this meal. Just stay organised and it you will find it all very straightforward.

Marinate the beef. Pour the lemon juice over the beef and massage into the meat on both sides – repeat with the soy sauce. Meanwhile, put the ginger, garlic, lemongrass, onions and black pepper into a pestle and mortar and pound until a pulp. (Use a small processor if preferred or simply chop together very finely.) Add this to the meat and massage again make sure the pulp is evenly spread on both sides. Finally add the oil and massage once again. Leave to marinate in the fridge for at least 4 hours or preferably overnight.

Make the broth (if using). Fill a large pan with water and bring to the boil. Plunge the chicken wings into the water and bring back to boiling point. Carefully drain the chicken in a large colander and rinse. Rinse the pan and fill again with cold water – about 4 litres. Add the chicken and bring to a very gentle simmer. (This extra process is necessary to rid the chicken of impurities which might cloud the broth.) Simmer the broth for 30 minutes, skimming the surface from fat and scum. Add the vegetables and bring back to a simmer for 20 minutes – add the coriander and continue to simmer for 10 minutes. Strain off 1 – 1.5 litres of broth and set aside – if necessary strain through layers of muslin to make sure it is as clear as possible. Continue to simmer the stock for a further 2 hours – adding more water if necessary. NB: the broth will be fairly week, but fresh with flavour. This is as it should be – we might think of it more as a tea than a soup… The extra stock is the outcome of making broth – it will be richer and more unctuous. Strain this when eventually cooked and store in the fridge or freezer for using later.

Make the lemongrass sauce. When you are about ready to start barbecuing, scrape away all the pulpy marinade from the meat on both sides. Put the meat back in the fridge. Add this pulp to a saucepan. Add the water and bring to a simmer. Simmer for 10 minutes then add the remaining ingredients (except for the lime) – simmer for a further 10 minutes adding more water if necessary. Strain the mixture into a clean saucepan. Taste and adjust the seasonings, using lime, soy, sugar and pepper. Set to one side.

Rinse the bean sprouts very well, put into a bowl and cover tightly with cling film – microwave on full power for 3-4 minutes. This is cooking the bean sprouts so they stay crunchy, but eliminate any pathogens. Do not cook for any longer than necessary. As soon as they are cooked carefully plunge immediately into cold water, avoiding being scalded with hot steam or boiling water. When cold drain and spin dry or dry on kitchen towels.

Slice the tofu into about 12-15 small cubes.

Chop the coriander, spring onion and chilli separately and put into individual bowls.

Grill the beef. Start the barbecue and let it get very hot. Grill the bavette on both sides until well charred but soft in the middle. It should be cooked rare to medium rare. Place in a dish covered with foil to rest for 5 minutes. Then with a very sharp carving knife, slice the meat against the grain diagonally at a very acute angle. Put the meat back in the dish as you slice to capture any juices.

Assemble the broth (if using). Wash the Asian greens and chop into small pieces. Bring the broth to a simmer and add the greens. Simmer for a minute. Ladle into bowls and add tofu cubes and a few bean sprouts (keep the remaining sprouts for adding to the baguettes or store in the fridge for stir frying at another time).

Heat the lemongrass sauce. Heat to a simmer and pour into a jug or sauce boat.

Assemble the banh mi. Slice the rolls or the baguettes in half add mooli, carrot and cucumber to each and top with beef.

Serve. Put a banh mi on a separate plates with a quarter of lime and serve with the garnishes and broth (if using). The lemongrass sauce can be added to the meat or bread as desired. Extra condiments can be included such as Maggi, soy, or sriracha sauce.