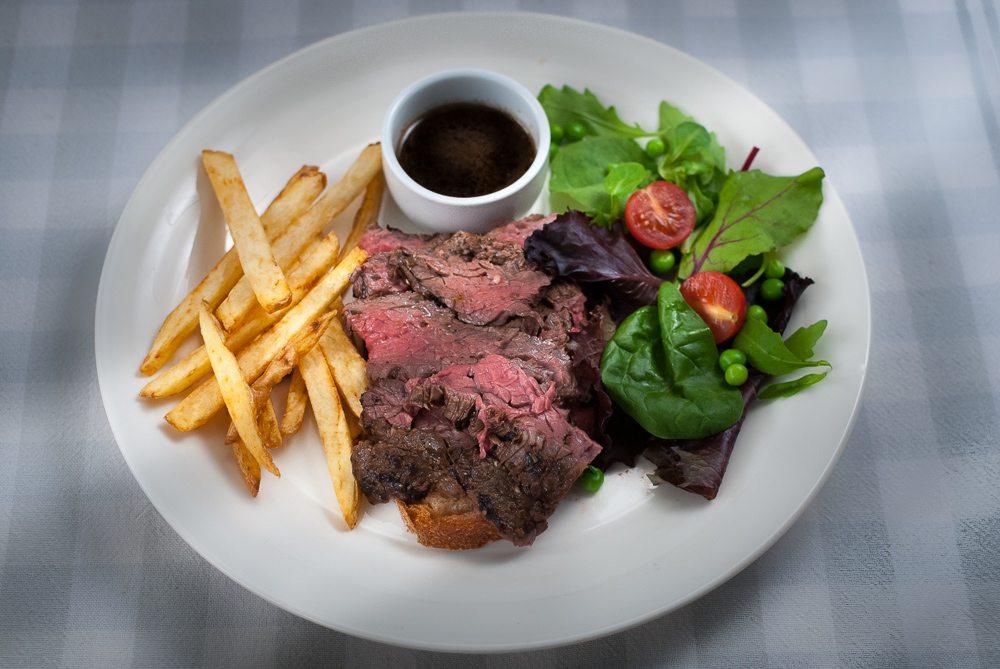 Good pinch of salt and good grinding of pepper

This open ‘sandwich’ was devised for our Californian Dreamin’ 2 Supper Club. It’s based on a ‘French Dip’ sandwich, which was invented in Los Angeles in the early 20th Century. The sandwich comprises, layers of roast beef, caramelized onions, Swiss cheese, and most importantly a bowl of jus or gravy, in which to dip the sandwich. It is served with garnishes of salad and fries.

In fact, as a Californian I was not aware of the French Dip. No doubt my mother was, whether she called it ‘French’ or a ‘dip’, or not, she would always prefer to cook steak in a way that had more in common with a French Dip than a T-bone. Her steak came from the flank, or skirt, and was sliced thinly and generously tumbled over bread. But her trick was to collect generous amounts of steak juices, which she poured over the steak so that it absorbed into the bread. There is a distinctive texture/taste explosion which happens when you combine, meat, jus or gravy and bread. It must trigger primal reactions, where we crave and devour the rare meat and mop up the juices with bread. It’s the vaguely embarrassing and guilty pleasure of eating at a hog roast or barbecue where all that is required is a piece of bread on which to gather meat, or of more humble and modest feasts, where the joint is used to create dripping and gravy which is served with batter puddings. It also ties into our unashamed and almost uncritical love of gravy. Gravy not only exists to moisten meat, but most importantly to flavour bread, rice or potatoes.

There appears to be some controversy over exactly who invented the French Dip sandwich, or how and why it came into being. But as the above demonstrates, combining bread meat and gravy is hardly an original idea. So it’s no wonder that our mother would serve her steak sandwiches ‘au jus’. And this is the inspiration for keeping my open sandwich version on the Californian Dreamin’ 2 menu. It’s the food of my California home.

This recipe is for a steak sandwich, made the way our mother made her sandwiches. She used flank, skirt or bavette steak. Skirt and flank are very similar with a rather close texture, the meat is tender when marinated and cut thinly, but it lacks the flavour of the bavette. Use skirt and flank for fahitas or other dishes where flavoured sauces or spices are used. The bavette is used for this plain steak sandwich for its taste and texture. It is still rather tough cut so it helps to marinate it in a marinade – though one that is fairly mild. I bought the meat from CD Jennings and Sons in Surbiton. We used their bavette for the first California Dreamin’ supper club and it was excellent.

For California Dreamin’ 2, I made some ‘French Dip’ additions to sandwich, including a melted Emmental (Swiss) cheese, which was made into a pouring fondue, I garnished with pickled red onions and used a oven roasted tomato (a favourite Californian ingredient) as Thomas Keller uses in many of his dishes. Cooking for 25 requires some things of certainty, and jus is not one of them. The bavettes will generate plenty of jus, but I also made a couple litres of beef demi glace and stock just to make sure.