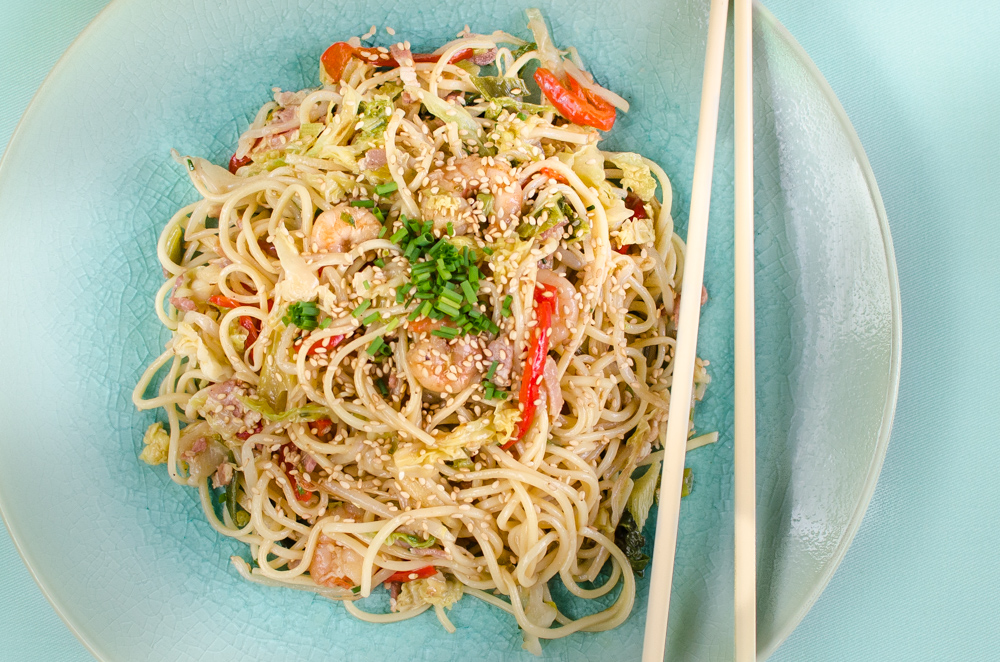 There are a couple of influences on this Japanese stir-fry. The first is Chinese: the dish emulates Chinese-style stir-fries and uses yellow wheat-based ramen noodles either containing egg or colouring. Japanese also refer to the ramen noodle as Chuka soba meaning Chinese noodles. The second is Western: at the heart of a yaki soba is yaki soba sauce, which is very similar to tonkatsu sauce by the ever-mentioned brand, ‘Bulldog’. The sauce is essentially a sweet, thick, fruity Worcester sauce and has become a staple in what is known as Japanese ‘Soul’ food, a Western-influenced and adapted ‘comfort’ food. We are told that yaki soba is a street food favourite and always served smothered in the thick brown yaki soba sauce. But I must admit I am not that keen on Worcester sauce unless it is present in the form of a few drops on a steak, or in a blue cheese dip or dressing. Large spoonfuls is outside my comfort zone. Therefore, this recipe is adapted with a toned-down version of tonkatsu sauce. NB: I cook my stir-fries in stages using several bowls – or one big bowl

Tips: Instant noodles can be fried to crispy, but other wheat and egg type noodles can become tough or bitter, so do not over-cook. Rather than load the yaki soba with extra vegetables, try cooking some plain green vegetables as a side. This is also good cold as a leftover or re-fried with egg for breakfast (cook the egg in the wok first).