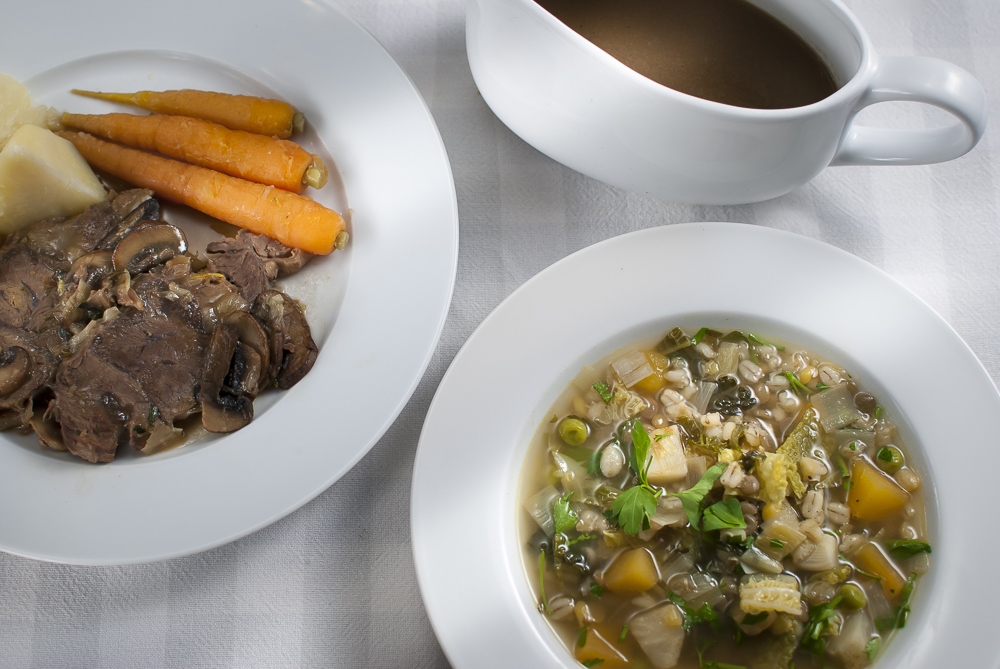 Half a small savoy cabbage

A friend is reminiscing about his mum’s canon of family recipes. He remembers mounds of Irish potato and onion ‘champ’ topped with pools of melted butter, thick bread pudding you can eat with your hands (not to be confused with bread and butter pudding) and ‘plum duff’, a steamed suet pudding at its best when sliced and fried in butter for breakfast the next day. However, there is one recipe that stands out, his mum’s signature dish: Scotch broth – a warming and hearty soup made with pearled barley, dried peas and shin of beef. The process of cooking Scotch broth starts the day before, when dried peas are soaked overnight – then after an early start the next morning, the broth is slow-cooked over the course of the day. The broth is served first – the beef is put to one side to be served as a ‘second course’ with boiled potatoes. As for the actual recipe, it is written down in a lost family recipe book. My friend suggested that I might try my hand at recreating this traditional English classic.

Despite Scotch broth being well represented on supermarket shelves, I was surprised by how few recipes I could find in my own modern cookery book collection. Jane Grigson’s English Food includes a recipe for Shin of Beef Stew by Francatelelli, in Cookery Book for the Working Classes – a thick stew made from the beef carrots and onion. This recipe could easily be adapted into a Scotch broth, as in a recipe I was shown from an ancient Foulsham’s Universal Cookery Book, where, unspecified beef, together with barley, green peas, carrot, onion and leeks are put in a pot with water and ‘boiled fully for 3 hours’. Simon Hopkinson says a proper Scotch broth should not look anything other than a ‘dull bowlful’. But by dull he does not mean devoid of flavour, he is simply acknowledging the visual outcome of slow-cooking cheap cuts of meat with vegetables in a big pot. It’s a practical and economic way to cook, especially for a busy housewife (such as my friend’s mum) managing a family on a limited budget without the benefit of modern kitchen appliances.

For my version of the recipe I am after a clear and intense beef and bone broth which can be used as both a cooking medium and a poaching liquid for the meat. I reduced some of the broth to make a rich gravy. Although, I could have used cuts from a shin of beef – or indeed any stewing type of meat – I decided to use a whole shin. This creates around 900g of meat after poaching, plenty for six as a second course. Cooking the whole shin adds more flavour from the bone – to give even more flavour, I have used extra beef bones.

Dried whole green ‘marrow fat’ peas were an essential part of my friend’s mother’s recipe and give the soup its distinctive taste and thickened texture. These peas are also known as ‘carlings’ and they brought back fond memories of buying peas pre-soaked at the grocers or keeping a pocket full of dried peas for shooting through straws. These peas are also an essential component in both ‘mushy peas’, the traditional accompaniment for fish and chips, and pea and ham soup. Scotch broth recipes should include carlings or certainly, some other type of dried pulse, such as split peas or lentils. Unfortunately, I could not find green peas in my local supermarket, so I used split yellow peas and green lentils – I tossed a few token fresh green peas in at the end.

It’s interesting to note how many early family classics were made from shins, shanks, tails, necks, bellies and cheeks – all tough and scraggy parts of the animal. But modern-day cooks and chefs understand these cuts and use slower cooking methods to bring out the flavour and tenderness in the meat. Today, these cuts are no longer considered ‘cheap’ – perhaps, rightly so, as a well-cooked shin of beef can provide a taste and texture experience to compare with any sirloin. Clearly this is a ‘secret’ that my friend’s mother knew as well as our modern-day chefs.

My way with Scotch broth is to cook each ingredient until just tender and then finish cooking in the stock. It uses a few pans, but I am happier having more control over the doneness of the ingredients. If you prefer, calculate the cooking times of the individual ingredients and add them to the pot to cook sequentially so that they are all done at the same time and then finish cooking together. Alternatively, follow the ancient recipe in my story above and throw everything in the pot together and simmer for two-three hours. Either way the result will be very British, very nostalgic -and very good.

Beef and bones by CD Jennings and Sons