‘…Big salads are a perfect way to experiment with different ingredients and offer a lighter refreshing meal to cleanse the palate. They’re adaptable and interchange as starters and mains which makes them extremely versatile’ 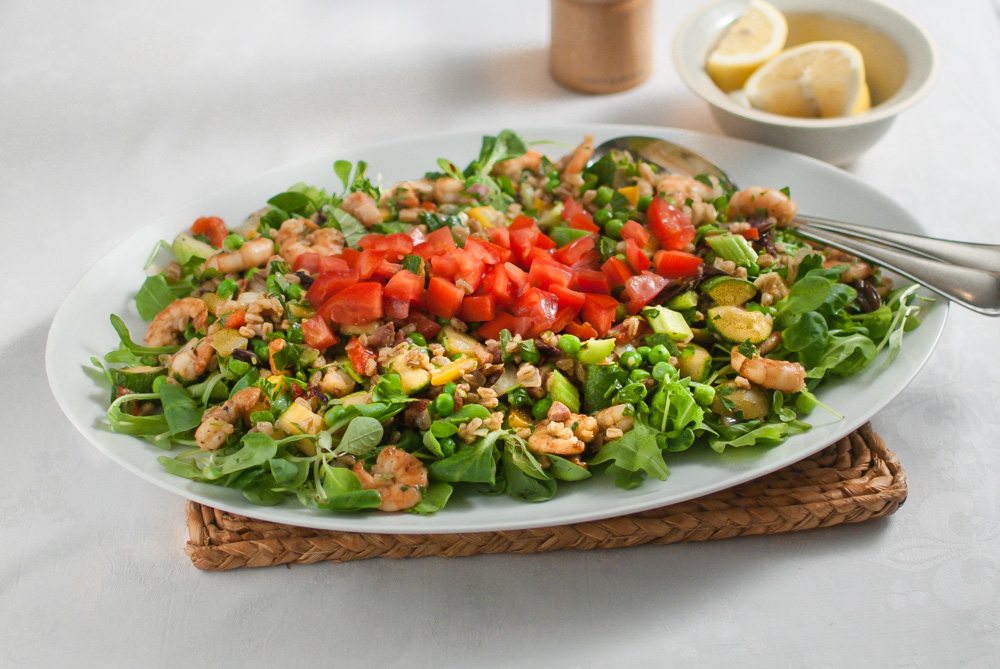 Fresh herbs, such as mint, parsley and chives (optional)

Ah, farro salad – it must be healthy!

Farro is what the Italians call emmer wheat, an ancient type of wheat grain. I know it as an Italian grain, since there was a time when I could only buy it from Italian delicatessens. It can be purchased as a whole grain (in which case it needs pre-soaking before cooking), but most often it is available in its refined form: semi-pearled or pearled, both varieties of farro processed to remove degrees of bran. The grain provides protein, carbohydrate, fibre, minerals, antioxidants. Some say it’s a healthier alternative to other grains. It’s low in gluten and is said to be easier to digest than high-gluten grains.

I like it for its nutty taste and nubbly texture, but also its ability to express itself with some nutritious dignity in a range of dishes. It has become something of a trend recently, especially in the risotto-style dish ‘farrotto’. So, if you’re looking for a starter for a dinner party, anything with farro is bound to impress – especially if it’s scattered artfully over a delicate and pretty salad. My ‘family’ salad is based on the idea that seafood and farro go well together (I have a fond memory of a squid and farro starter enjoyed in a smart Italian restaurant).

Farro, barley, quinoa and the like, are also useful alternatives or supplements to the main carbohydrates of potatoes, pasta and rice. I will often experiment with them; make something tasty and then wonder why I do not cook with them more frequently.

NB: Farro is emmer wheat and often confused with spelt (T.spelta), another grain in the wheat family. However, they can be used interchangeably as both have similar characteristics and tastes. Diana Henry in her book, ‘A Change of Appetite’ says that pearled spelt makes a better risotto…

NB: Do mix and match with this salad. Start with prawns and farro and then build your salad with what’s in season, what you like or have to hand.