‘…have a read of Dad’s story below to find out! This is a classic dish you can find in most Mexican restaurants… but why, when you can make it yourself with your buds round and a couple of beers in the garden. Something we also do as a family – all the dishes in the center of the table with our hands digging in a preparing our wraps. Proper family food.’ 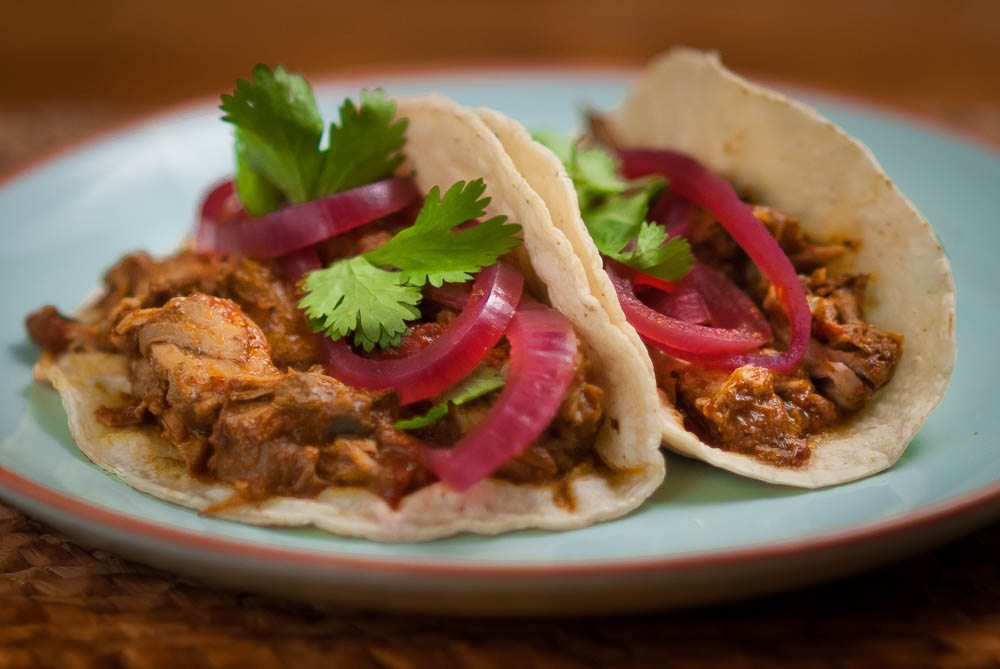 For the achiote paste

For the pork pibil

For the pickled onions

I’ve missed out on pork pibil…

I didn’t eat it when I was in Mexico; I ‘ve never ordered it at a Wahaca restaurant; and I didn’t even see Johnny Depp eat it in the film Once Upon a Time in Mexico.

But I really had to see what all the fuss was about – so I made it myself.

Pibil is a specialty of the Yucatán Peninsula and is of Mayan origin. It’s a slow-roasted meat or fish wrapped in banana leaves and traditionally cooked in a pit. It uses achiote – a bright red-orange substance, which colours the dish as well as giving it an earthy and peppery flavour.

Pork pibil is Wahaca’s most popular dish. It’s worth pausing to consider why this is so. With its acidic and bitter notes, I imagine a pibil must be something of an acquired taste. On the other hand, pork pibil is basically Mexican pulled-pork – and any kind of pulled-pork is always going to be popular. Or it could be that Wahaca’s customers have seen Once Upon a Time in Mexico: and who doesn’t want to eat like Johnny Depp?

I think the real reason people are attracted to pork pibil is because it’s so good. As Rick Bayless says in his book, Authentic Mexican: ‘With its earthy spicy marinade, roasted peppers, fresh tomatoes, fragrant banana-leaf wrapper and crown of crunchy pink picked onions, this dish is one of the glories of Mexican cooking.’

These recipes are adapted from Rick Bayless and Diana Kennedy to make cochinita (pork) pibil.

Serve the pibil in tortillas with the pickled onions.