‘Another easy steak dish supporting our local butchers CD Jennings and Sons. There are other cuts than the well known sirloin and rump, and they are cheaper but just as juicy and delicious. Dad loves cooking with them as they remind him of childhood, so we get to share a little family experience. A real simple recipe, and by the end of it you’ll also know how to make your own BBQ sauce (Dad’s sauce recipes rule by the way)! Read Dad’s story too as you’ll learn a little more about different cuts of steak available – worth a read. Happy BBQing!’ 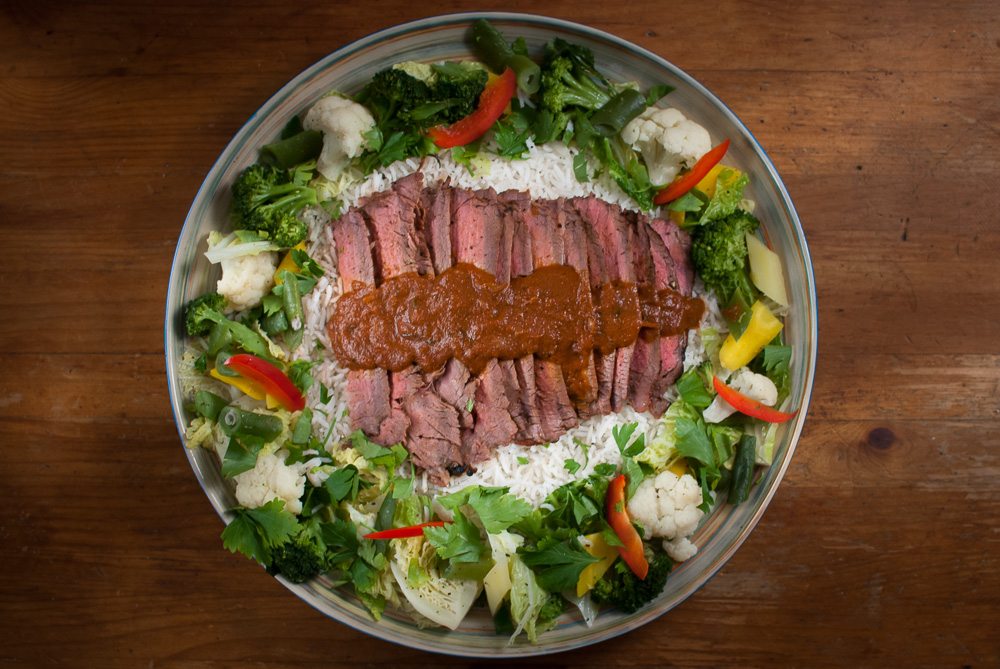 What’s the difference between skirt steak and flank steak – and what about the hanger steak, bavette and onglet?

Cheaper cuts of beef have been popular for many years. The so-called ‘butcher’s cuts’ are now sold on display rather than kept back as a perk of the trade. All the cuts mentioned above come from the underside of the animal around the abdomen (flank) and the diaphragm (plate or skirt). They work hard so they are tough and were traditionally used for mince. I imagine the strips of muscle needed to hold in the gut of a huge animal to be rather like rope – so I associate the stringy textured cuts come from nearer the heavier front of the animal. They form part of the diaphragm muscle so are nearly offal. Indeed some are still classed as offal. For this reason many say the skirt, bavette, and onglet taste gamey or of offal. Many of these cuts are known by different names depending on the butcher and regional variations. Further, the distinctions between outer and inner muscles adds to the confusion of these cuts and they are often not shown on meat charts.

The hanger steak hangs inside the animal holding up the diaphragm. It’s known as the ongley in France and often used for steak frites. Antony Bourdain swears by the cuts and they feature in his Les Halles cookbook. It’s a rough old cut and looks rather like very thick and unraveled rope. It has a distinctive ‘V’ shape pattern to the meat and a tough sinew running down its length.

The skirt is taken from the outer part of the front flank or skirt/plate area of the animal. It’s characterised by pronounced muscle striations and plenty of marbled fat. It’s famously used for fajitas in America and Cornish pasties in the UK. I’m going to stick my neck out here and declare that a skirt steak and bavette are more or less the same cut of meat.The skirt and the bavette both have a deep beefy flavour.

The flank is taken from the abdomen (in the flank). It comes as a flat rectangular thick steak. The muscle strands are strongly pronounced, but more even and dense than the skirt, it is also quite lean. The flank is tenderer than the skirt.

All these cuts take marinade very well. They should all be grilled very quickly on high heat and served rare to medium. Most are best when cut thinly on a diagonal against the grain.

I’ve bought my meat from CD Jennings and Sons in Surbiton. They sell two types of steak from the flank and skirt: flank skirt and bavette. (See my story above for more info about cuts from this region.) I’ve used flank skirt in this recipe.

Both these cuts are called different things depending on the butcher and national styles of butchery. In America Jenning’s ‘flank skirt’ is called ‘flank’. Whereas their bavette is called ‘skirt’. The bavette is tough but has tons of gamey flavour. This is why I would give it a lighter style of marinade – so the flavour of the meat comes through. The flank skirt is more tender but is lighter in flavour. It therefore works well with stronger marinades to give a more distinctive and flavoured body to the meal. I’ve used a standard homemade barbecue sauce.

Make the barbecue marinade. Add oil to a pan and fry the onion, garlic and chilli on a medium heat for 5 – 10 minutes until soft. Add the cumin and bay leaves and cook for a minute, then add the paprika, vinegar, sugar, pasatta and stock or water. Stir and bring to a simmer and cook for 30 minutes with the lid ajar. Add a large pinch of salt and adjust the seasoning. Cool the sauce and add the steak. Marinate in the fridge for 4 hours or overnight.

Barbecue the meat. Scrape the barbecue marinade from the steak into a bowl (retain the marinade). Heat a barbecue to high heat and cook the steak on both sides until browned and charred. Remove from the barbecue whilst still rare. (Test with a probe to a temperature of 55C, or cut to look inside the steak.) Cover with tinfoil and let rest for 15 minutes. Cut the steak diagonally against the grain.

Make a barbecue sauce. Heat the marinade in a pan adding a little more passata and stock if needed and season. Cook for 5 minutes.

Serve the steak how you like – I’ve served mine with rice and a medley of veg. Serve with with the barbecue sauce.