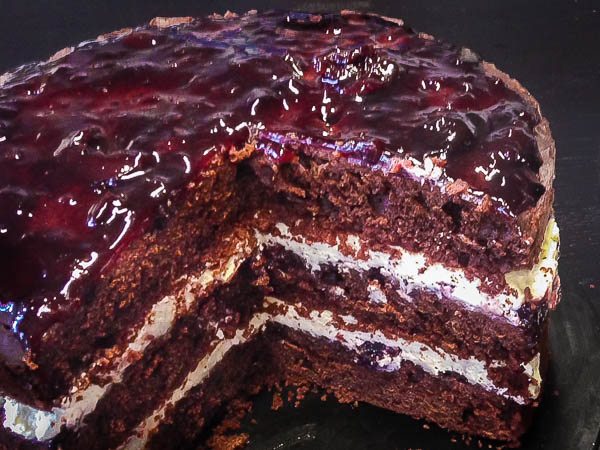 Pete asked for some help with his office bake-day cake…

…especially since a team member has a refined-sugar intolerance. Despite this person’s plea to not make special exceptions; sugar-free baking presents an interesting challenge for WDC. I was keen to see if I could create a recipe for Pete that would still be good to eat without thinking, ‘Hmm, this would be nice with a bit of sugar…’

A quick check on sugar replacements, include:

Xylitol – made from the bark of birch trees, looks and tastes like sugar, it has Low GI, so it has less of an impact on blood sugar levels than sugar. You can use it as a substitute in many recipes in a ratio of 1:1 with sugar, but not when yeast is used as a raising agent.

Agave nectar – a syrup made from the agave cactus (clever cactus). It can be used in place of other sugar syrups. It’s available in light or dark versions and has a low GI and is sweeter than the equivalent volume of sugar. It will add moisture to the cake – good for chewy bakes such as cookies or flapjacks – but will not work as a sole replacement for sugar in sponges and will need an adjustment to the amount of liquid used.

Honey – like agave nectar, honey is a syrup and will work well in moist bakes. Like agave nectar, adjustments will need to be made to offset the extra moisture. As with sugar, honey can have a moderate or low GI, though both are still high in calories and quickly absorbed in our bloodstreams.*

Stevia – is a widely grown plant which belongs to the sunflower family. Studies have shown it to be a safe and natural, calorie-free sugar substitute with a zero GI rating and is commonly used to sweeten a number of foods and beverages. It is many times sweeter than sugar so needs to be bulked-out with other agents in baking.

Most sugar replacements have a taste issue, the assistant in the health food shop says xylitol tastes metallic and stevia tastes bitter…

Honey seems safe; we are familiar with its taste and it is something most people like and often use. I am tempted to try honey, particularly in the many standard ‘honey cake’ recipes, which are meant to taste of honey. Pete says using honey is a popular choice for office sugar-free bakes, but that he finds the taste of honey is odd in flavoured  cakes where the taste of honey is not expected.

On balance, I am drawn to xylitol, as it looks like sugar and will be easy to work with as it can be is substituted in equal amounts with sugar. Pete and I tasted it and think it not as sweet as sugar. I sensed a processed chemical quality which left a tangy – perhaps metallic – after-taste. But we assume with all the other flavours this will not be an issue.

The idea of using chocolate appeals as this will add flavour and distract from the cakes’ lack of sugar. I also want to include Dalfour jam  – which only includes natural fruit sugars. Finally, frosting will be difficult without the bulking effect of icing sugar (stevia methods may be a good option). An easier workaround is to use cream.

NB: Chocolate bars will often include sugar so check the labels. Ensure you only use chocolate sweetened with natural sweeteners; or use raw chocolate. Also, ensure your vanilla does not have sugar in the ingredients. Use pure vanilla extract, or use the vanilla seeds from a pod (if possible extract more vanilla from the bean itself in any liquids used, such as the boiling water in the recipe below).

The feedback from the office is that it is a success and tastes very good.

*The glycaemic index (GI) is a rating system for foods containing carbohydrates. It shows how quickly each food affects your blood sugar (glucose) level when that food is eaten on its own. (NHS website). The higher the rating the quicker the food is absorbed into our bloodstream and raises blood sugar levels. The GI is widely used when comparing sugars and their alternatives. However, this is not an exclusive indication of the health qualities of each product, as many other factors can affect the GI rating index. Please see published information on the subject for more information on the health aspects of each sugar alternative shown above.

100g – 100% chocolate (no added sugar or sweetener) NB: 100% chocolate is produced by the ‘Willie’s Cacao’ brand – it seems expensive but is a comparable cost by weight with ‘health food’ chocolate using other natural sweeteners. If other chocolate is used which include sweeteners, try holding back on some of the xylitol and adjust after the cake mix is beaten.