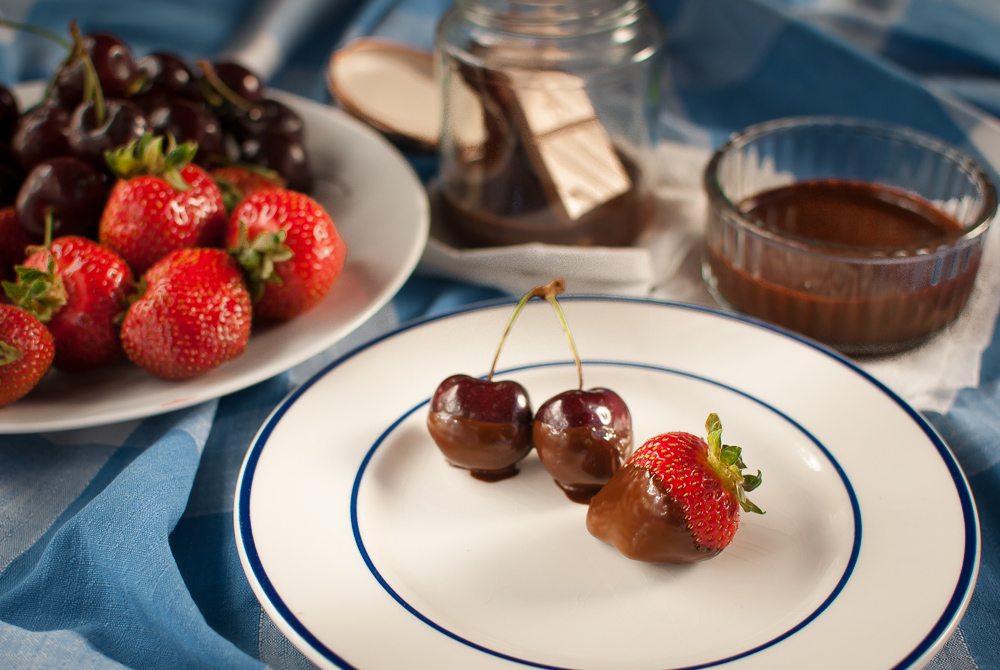 This tip is based on the simple idea of using solar energy to melt chocolate.

The delight of the tip is that it turns what is usually a disaster – chocolate melting in the sun – and turns it into an opportunity: chocolate fondue in a jar!  Simply add equal parts dark and milk chocolate to a jar, put on the lid and pack it with the picnic along with lots of strawberries and cherries. Then leave the jar in the sun whilst you’re tucking into the savoury part of your picnic. By the time the sarnies have gone, the barbecue chicken has been noshed, and the last remains of the pasta salad is being sealed in its Tupperware boxe, the chocolate should have melted. Then pour the chocolate into a dish and dip the fruit into the chocolate. I was surprised that melted chocolate at a picnic would be so engaging and entertaining. Indeed, it might be advised to keep the magic substance out of view – and out of mind – at least until the children have had some of their five-a-day.

The only caveat to this tip is that one must guard against a primal urge to allow chocolate to spread over the face and hands or drip onto tablecloths, picnic blankets or your best picnic outfit. I’ve seen grown-ups holding little ones in their laps and sharing the last remains of the chocolate dish, each using all their fingers to capture last traces. It’s therefore a good idea to pack plenty of wet and dry hand towels to keep tabs on any mobile chocolate. But, don’t take it too seriously, the jeopardy of melted chocolate at a picnic is all part of the fun. It will bring huge amounts of enjoyment and great memories to your picnic.

I’ve used equal amounts of plain and milk chocolate. This helps to appeal to both adult’s and children’s taste, it also gives sweetness without the need to add extra sugar. Avoid adding other ingredients that you might use in a chocolate sauce, amalgamating these might be beyond the capabilities of your little solar-powered oven.

A tasty cheat made in an instant!

At the heart of Mexican cooking is a proper Mexican corn tortilla.

This was an improvised quick dinner. I did not plan to post it, but it was so good I photographed it while we were eating it!