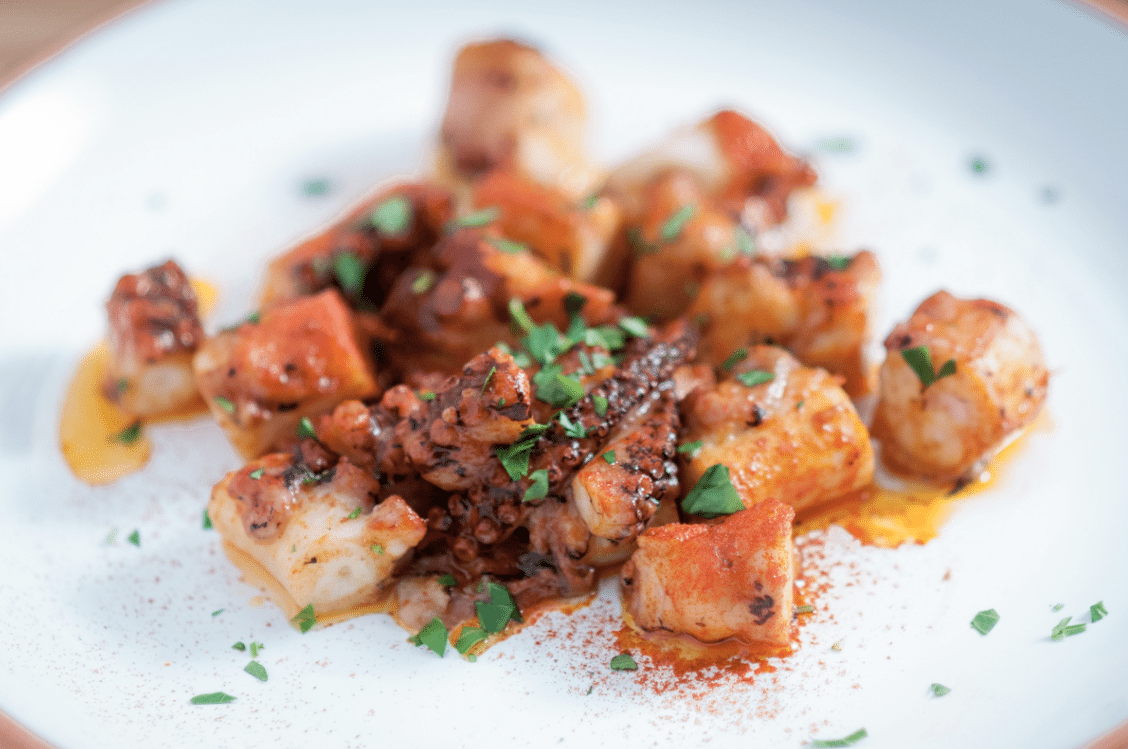 I recently ordered an octopus from my fishmongers. A week later it arrived in a solid frozen block. I went off with the octopus imagining how I might cook it. I settled on three ways. On my return to the fishmongers I mentioned that I cooked his octopus three ways, but because it had eight legs, it was a bit tricky dividing into three! We both laughed. I showed him photographs on my phone; octopus the first way then the second – and then put my phone away. Where’s the ‘third way’ he asked. I said it was in the freezer, as I couldn’t get my wife to eat octopus three nights in a row! We both laughed again. You see? Octopus not only tastes good, it’s also good for a laugh!

This method first boils the octopus and then cooks it in a quick confit. Tradition has it that putting a wine bottle cork in the water will help to tenderise the octopus. I suspect the freezer will have had more to do with this claim than the cork. My 1080 Recipes, the classic Spanish cookbook also describes a way of plunging the octopus repeatedly into boiling water. We are also told that octopus should be bought with double suckers on the legs (a double-suckered octopus is reputed to have better flavour than the single-suckered type). Whether this kitchen myth or fact is difficult to prove.

This time the octopus is braised in it own juices i.e. without any additional liquid in the braising pot. Many chefs eulogise about how cooking without water is such a revelation.

Richard Olney in his book, Simple French food  suggests that an octopus would be very good cooked as a daube, i.e. as a French Provencal stew. I had some trepidation with the idea of octopus braised with aromatic vegetables, (as if it were neck of lamb or shin of beef), but in fact it is not that far removed from a zarzuela – or as Mr. Olney mentions, the rich tomato and garlic based sauces associated with seafood, such as a la Setoise, Nicoise or Provencal.

This is best cooked to eat the following day.