How To Make Cheap Grilled Artichokes 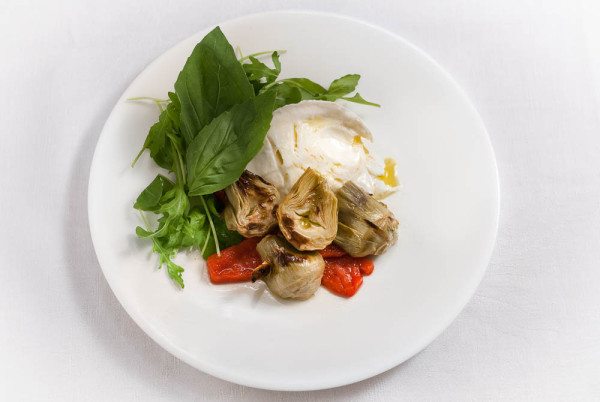 Deli-style artichokes from a tin – at a fraction of the cost!

This is some achievement. Tinned artichoke hearts are a poor imitation of fresh artichokes – they retain only the faintest hint of their original earthy taste and little of their texture. The dominant flavour (as with other ‘exclusive’ tinned vegetables) is the taste of canning liquid: salt, vinegar and tin.

Nevertheless, tinned chokes still have a useful place in the store cupboard. With a dollop of mayonnaise they make a welcome addition to to a tuna salad, they can be whizzed into a puree and spread on Pugliese toast. And in an emergency they can even be cooked in a tomato sauce with tagliatelle.

However, through a process of trial and error – motivated as much by curiosity as thrift – I have finally devised a method to elevate the status of these bland buds to that of a proper chargrilled artichoke. Here’s how:

Drain the artichokes. They are extremely fragile so treat them with utmost care throughout the process . Do not be tempted to force or squeeze the excess liquid from the artichoke..

Cut the artichokes. Using a very sharp stainless steel knife – and I mean very sharp – cut the chokes in half. If the knife is not razor sharp the blade will squash the leaves and break the delicate heart of the artichoke. A carbon knife will leave a metallic taint on the artichoke.

Dry the artichokes. Tear-off about eight kitchen towels from a roll and make a layered stack of single towels. Place the artichokes cut-side down on the stack. Leave for half an hour.

Grill the artichokes. Place them cut-side up on a grill tray. Grill under a hot grill until they are covered with brown and burning specs. Keep the grill on a high heat setting so they grill quickly and do not over-cook. Turn them over and repeat on the other side. NB: It’s difficult to get the very black bits on the artichokes. This requires grilling on a grill pan or on a barbecue – which may cause them to disintegrate and taste of burnt oil.

Confit the artichokes. In a small pan combine a thinly sliced garlic clove, a small sprig of rosemary and thyme, a large pinch of dried chilli flakes and the artichokes. Pour light olive oil level to the top of the artichokes. Heat gently for 20 minutes – keep the temperature at about 80C – 90C. Do not let the oil get to hot. However, you should see the artichokes bubbling as they evaporate their remaining liquid and expel trapped air. (We do not need to cook them any further – just get them comfortable in their new oily home.)

Cool the artichokes and place in a bowl with the oil. Store them in the fridge and allow the flavours to develop and mingle for a day. They will keep for at least a week.

Eat the artichokes. You will find that they have miraculously regained their mojo. They have firmed-up and lost any trace of their tinny preserving liquid. Their distant artichoke flavour is now quite pronounced. They could very easily be mistaken for the real thing.

They will be great as an antipasto or a bruschetta, and can proudly take their place in a tomato sauce for tagliatelle. I used them in sandwiches, inspired by a very tasty ricotta, mortadella and artichoke panini ordered recently from My Place on Berwick Street.

A tasty cheat made in an instant!

At the heart of Mexican cooking is a proper Mexican corn tortilla.

This was an improvised quick dinner. I did not plan to post it, but it was so good I photographed it while we were eating it!