3 Ways To Cook Salmon in a Pan 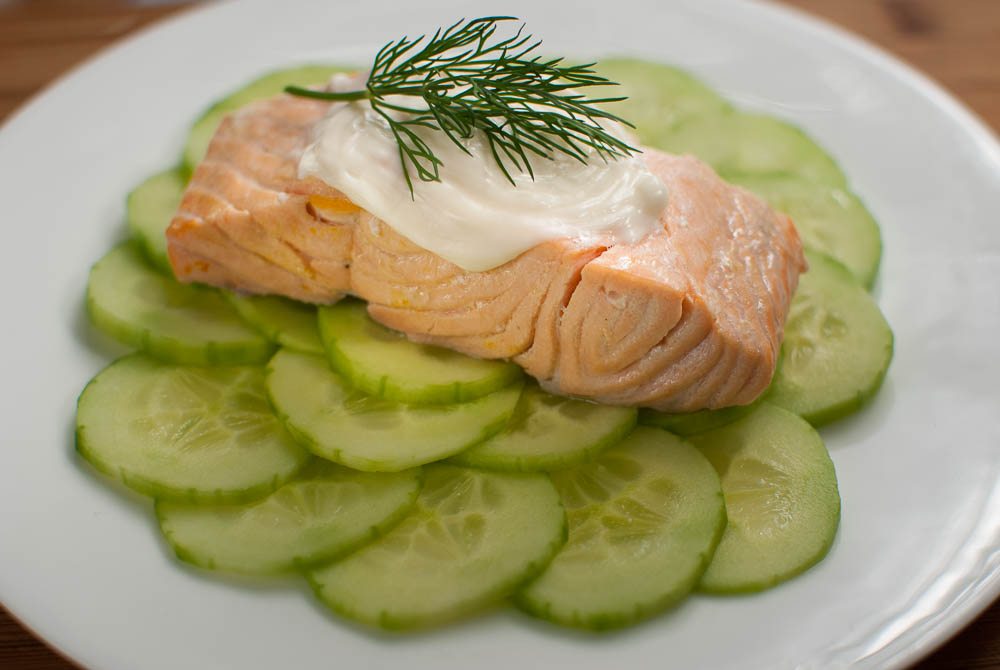 Poaching fish is easy. You might think that this method takes all the flavour from the fish – but it doesn’t, the fish is flavoursome and has a fresh and tender texture. Salmon is especially suited to poaching. It even has a special poaching pan, the ‘fish kettle’ – but unless you are catering for a wedding, a simple flat pan with a lid will work fine. You can serve poached salmon while it’s still hot, but is even better served warm or at room temperature.

To speed-up the process, grate a small carrot and stick of celery, slice half an onion very thinly and put in a flat pan with lid. Crumple the bay leaves and add to the pan along with a sprig of thyme, a few whole peppercorns and a teaspoon of vinegar.

Add water to fill the pan by three quarters. Bring the liquid to the boil, stir and then simmer with the lid on for 5 minutes.

Place the salmon fillet in the poaching liquid, moving the vegetables so that it is nearly submerged.

Poach the salmon for 7-10 minutes, testing with a knife to see how far it has cooked in the centre. (A temperature probe can be used – the fish will be fully cooked at 60C.)

However, whilst the fish is still underdone, transfer it to a deep bowl, strain the poaching liquid over the fish and let the it cool in the liquid. The poaching liquid can be cooled and put in the freezer for poaching fish another time. (Note how the salmon split after testing for doneness with a knife – I didn’t worry to much as I knew it could be repaired in the presentation.)

Take the fish out of the liquid and scrape off the skin (which is not nice to eat when poached). The brown fatty meat can also be removed.

The classic way to serve this is with dill and mayonnaise and a simple cucumber salad.

Many years ago I bought a fish from Chinatown. It was the freshest fish I’ve ever bought – I chose it while it was still swimming in the shop’s huge tank of live fish. I asked the fishmonger how I should cook it and he said steam it with ginger, spring onion and soy sauce. I knew about this classic trinity – but somehow I thought the authenticity of the fish shop would merit a more complicated and ‘authentic’ method. However, I am assured that this is as genuine as Chinese cooking gets and pass on the advice I was given – it’s an excellent way to cook fish. Again, don’t be put off by the idea of steaming, it’s actually very simple and makes a full-flavoured dish that is light and easy to eat. Special equipment is not necessary –  improvise a steamer if you don’t have one. I used a flan case and a bowl in a flat pan with lid. Try using scrunched-up tin foil, a trivet, or of course a proper bamboo steamer in a wok.

Use a steamer if you have one – or improvise…

Put a bowl or dish in the ‘steamer’. Chop the spring onion and ginger, placing some under the fish and some on top. Pour over about a tablespoon of soy sauce.

Steam for a good 10-15 minutes, checking for doneness with the tip of a knife or using a temperature probe (60C is done for fish).

The steaming creates its own sauce, you can eat it straight from the steamer or serve with rice or noodles and greens.

Frying fish is easy. Or is it? Perhaps not, if you think about the number of TV chefs who jump through hoops trying to explain their perfect technique for frying fish; or when you think about all the nightmare scenarios we have with fish. There’s the burnt and dried-out specimens that end up as cat food; or the patronising waiters who dismiss our concerns over the piece of raw-in-the-middle salmon, ‘surely sir has eaten sushi…’ or the endless failed attempts to make skin crisp.

So, perhaps it’s not that easy to fry fish after all. Here’s how I fried a piece of salmon in a metal frying pan.

The finished fish is served in a butter and lemon sauce. This is an extension of a founding principle that guided all of my father’s cooking, based on a simple maxim: everything tastes good with either butter and salt, or cream and sugar. I have not tested this empirically, but I can vouch for the verity of the former when it comes to salmon. I used this method of cooking in the WDC recipe salmon in butter and lemon.

Most fish skin is good if it can be made crispy. But crispy skin only occurs under two conditions: 1). long slow cooking and finishing with high heat 2). dry fish skin.

So de-scale the skin, squeegee out the water with a knife blade and finally dry the skin with a kitchen towel, and rub with a little oil.

I have used a steel pan for the sake of the photos. However, working with steel frying pans requires attaining a certain temperature to ensure food doesn’t stick (a higher temperature than is needed for a non-stick pan). I don’t know the science behind why food will not stick in a steel pan at a high temperature. Perhaps low temperatures allow the food to get-up close and comfortable with the metal, but then mingle too much, refusing to part. Whereas with a hot pan, the pan is so hot, the food decides to keep its distance.

Heat the pan until a sprinkling of water does not fizz but turns into a scattering of spherical balls of water. Stop momentarily to marvel at what is happening and play with the balls – then turn the heat down to keep the pan at the lowest temperature point within this phenomenon’s range of temperatures.

Lose the balls of water and replace with a light vegetable oil, tip the pan around to cover the base with oil and place the fish skin side down on the pan, pushing down with your hand (avoiding hot splatters) to ensure the fish stays flat on the pan surface.

Then wait. Don’t poke or fiddle about with the fish but watch it closely. You will see that the translucent fish becomes opaque near the pan and that this plimsoll line of doneness travels up the side of the fillet. Continue cooking until the line is about three quarters up the fillet.

At this point put a large knob of butter in the pan and baste the fillet , before turning over with a spatula.

It will soon be cooked (test with knife – or 60C with temperature probe). It’s always good to take the fish off the heat just before it has reached the point of being fully cooked – it will continue to cook while resting.

Plate the salmon, discard the fat in the pan and wipe the pan clean. Add another knob of butter and a good squeeze of lemon and a pinch of salt. Whisk this to an emulsion and pour over the fish.

Serve with new potatoes and greens.

NB: This pan may look like a rather fierce way to fry the fish, (remember a non-stick pan can be used at a lower temperature – especially for leaner fillets of fish) however, this fillet was very fatty, so the fish was still perfectly moist and delicious inside. You will notice that the skin has become crisp. This crispness represents the outcome of the skin protecting the flesh from the searing hot pan which allows the flesh to cook more gently. So we get better cooked fish and a crispy skin.