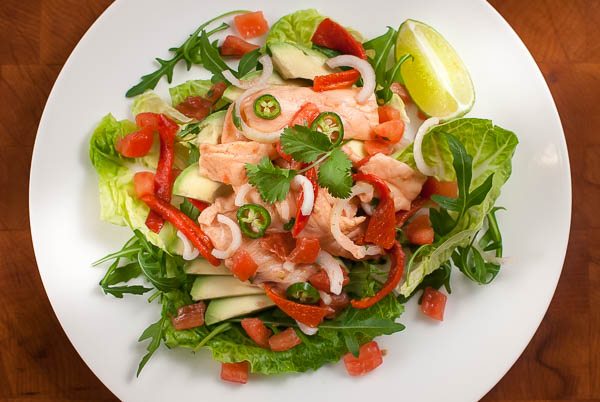 We’ve all heard of ceviche – you know, where the lime ‘cooks’ the fish – but why don’t we see more of it?

Ceviche is common way to eat fish in Mexico and Latin America. Could the climate and geography of these regions make it more palatable? Possibly. I can imagine if I travelled to the West coast of Mexico and was sitting in a cantina, basking in the tropical sun, gazing out over the Pacific Ocean while sipping an ice cold cerveza , the mahi-mahi ceviche would go down very well indeed.

Is this the reason ceviche cannot find traction in our cool and temperate land? Or are we just suspicious of the unfamiliar; happier to choose fish that is properly cooked – preferably deep-fried and coated in batter!

Well, what ever the reason, we should be eating this all the time – it really is very good. It’s no more trouble than making a taco and certainly much easier than making fish and chips. Make it as a starter – and use salmon, it works brilliantly.

As well as fish, you can ‘ceviche’ any kind of seafood, Mexicans are fond of using prawns, squid, clams and scallops.

For this much fish (about 180g), I used half a lemon, half a lime, half a small blood orange, half a shallot and 2 tbs ginger beer. I used a good pinch of salt, pepper and sugar. The salmon is skinned and sliced thinly. Slice the shallot thinly, mix all the curing ingredients and pour over the fish. NB: I am using orange, and ginger beer to tone down the sharpness.

Before and after. I cured the salmon for 2 hours. The effects of the cure can clearly be seen. The salmon is opaque all the way through, the slices have some bite and firmness to them and seem like a normal piece of cooked fish. However, it has a fresh and satin-soft texture which is deliciously satisfying.

Drain the salmon and layer green salad leaves, avocado, skinned and cubed tomato, sliced roasted red peppers from a jar, a few of the shallots, chilli and cilantro. Taste and season. Drizzle over some olive oil and serve with lime.

From the tropics to the arctic! Gravadlax is a Scandinavian way of curing fish. Gravad means buried in Swedish and lax means salmon. We’re not talking rotten fermented year-old shark here, quite the opposite. A sophisticated delicacy on a par with traditional smoked salmon. The recipe is simply salted salmon. But the salting is halted after twelve hours to 2 days so that the fish does not loose all its moisture. I’ve used Tom Kime’s recipe in the past and it was good, so have used his ingredients and method here. One starts with salt and sugar – the traditional seasoning is dill and lemon – further aniseed notes are added with the fennel and the star anise – Juniper introduces a hint of Nordic pine . I might experiment with caraway and Juniper – but as you can see below the process is quite involved – so I only make gravadlax on a special occasion. This infrequency mitigates against too much experimentation. (If it’s not broken don’t fix it!)

I used about 200g of Malden salt, crushed the spices in a pestle and mortar and then blitzed the sugar, a quarter chopped lemon with a spoon of salt. Once this was blended I added the rest of the salt and blitzed for a second, then mixed by hand until all blended.

The salmon after 12 hours of curing (and soaking). Discard the curing mixture and soak for 1 hour in cold water changing the water every 15 minutes.

Press lemon rind and chopped dill and pepper into the salmon and cut into thin slices.

Arrange on a cling film and cover with another sheet of cling film. Use a pan to flatten.

Arrange on a plate. Serve as an hors-d’oeuvre or starter with rye sourdough bread, salad and lemon. You could use a thin mayonnaise and mustard dressing.

This is rather similar to ceviche, but the fish is cooked before it is covered with curing liquid. The method is also used for pickling vegetables. In Mexican cooking en escabeche describes a ‘light’ style of pickling, famously used for purple pickled onions and jalapeno chillies (my recipe is based on a jalapeno chilli escabesche). I have recipes from Mexico for octopus and oyster escabeche and in Europe I have also seen it adopted with oily fish such as mackerel. Salmon is also oily and works a treat as an escabeche.

Veg to go with the pickling liquid.

While the vegetable finish simmering, fry a lightly floured fillet in a pan on a medium high heat. Make sure there is some colouring on the salmon. It should be nearly cooked.

Then transfer to a deep dish and pour over the hot vegetables and liquid to marinate. Leave to cool and refrigerate overnight.

This is the finished the escabeche, marinated overnight. It’s wonderfully peppery, piquant and tangy, making it an ideal starter to stimulate the appetite for the roast dinner to come…