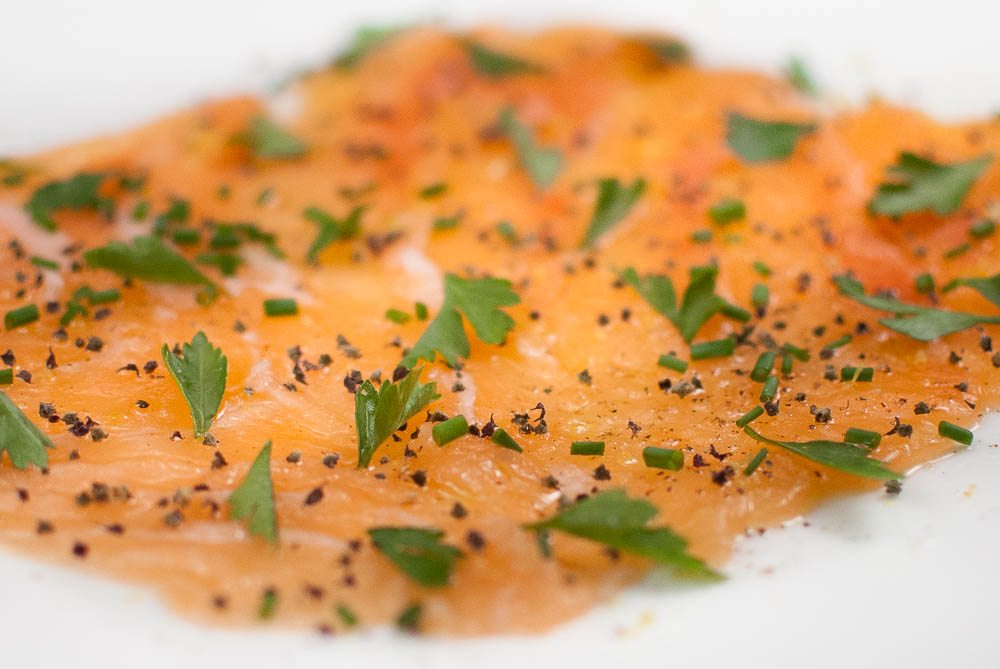 The widespread acceptance and enjoyment of sushi has changed our attitude to eating raw fish. We no longer consider it odd, distasteful or even unsafe – now we wolf down our sashimi and maki rolls as if we turned Japanese years ago…

With the sushi mold broken two other raw fish dishes have now appeared, both based on the familiar raw meat dishes carpaccio and steak tartare. The former is thin slices of raw flesh and the latter is either chopped or minced flesh, usually formed in a neat disc. In both cases the fish of choice is invariably tuna, probably because it has a robustness similar to beef. Salmon is more delicate than tuna, both in taste and texture. Marco Pierre White’s tuna carpaccio Niçoise, for instance, includes Mediterranean herbs, olives, capers, peppers and anchovies –  a mixture of tastes which is very good on tuna but over-powers the poor salmon.

My carpaccio allows the taste of the salmon to come through. In fact, this is a great example of sourcing not saucing. There are three key ingredients: basil flowers (Africa variety from Casanova & Daughters), Ravida olive oil, and top quality salmon. This recipe is brilliant and is a classic demonstration of how a simple preparation with the best ingredients can produce a stunning dish.

The three main ingredients with lemon zest and salt and pepper. The pastry brush is used to work the olive oil into the salmon. The basil flowers are inside the paper pack. Open the wide end and scrunch between palms to release the herbs. The basil flower variety has a fennel note, with a dry Mediterranean herb taste. A good alternative (tried and tested) is fresh tarragon and a little dried oregano.

This salmon is from the top of a middle side of a fillet, with skin and dark meat removed (the remainder of my piece prepared for sushi – see below). It is about 138g in total – half will cover a normal dinner plate – so the whole piece will make an impressive starter for two.

My Japanese knife does the job beautifully and was a pleasure to use but this is not sushi and the fish will get bashed about later, so any good knife will work perfectly well here. Cut the fillet horizontally in half to make two equally-sized pieces

Put one of the pieces on a large sheet of cling film, then lay another piece on top.

Gently flatten the salmon with a meat hammer or rolling pin. It should expand to twice the surface area of the original piece. The principle is similar to making escalopes – hammer gently from the centre moving the hammer to the outside of the piece as you press down on the flesh – spreading as well as flattening.

Next spread a good, rich but not too strong or grassy, olive oil over the salmon using a broad pastry knife (I used Ravida olive oil – an excellent oil with tomato, green leaves and apple taste notes). Sprinkle with basil flowers, a little lemon zest, chives, parsley salt and pepper. Serve with wedges of lemon and some good toasted crusty bread.

Based on the idea of raw chopped or minced beef. Steak tartare usually includes chopped cornichons, capers, and onion – often including mustard and Worcester sauce. It should always have a raw egg on top.

I started with steak tartar as a template and have adapted by taste to make my own version. I like the idea of shallot in the mix to give some texture. I soaked the shallots in water to take away the bitterness and sharp heat of a raw onion. Capers work very well with salmon but I did not want the mix to be overpowered with acid or salt taste so have soaked them as well. Cornichons add too much lingering dill pickle taste so I have omitted and used fresh cucumber int he garnish. Mustard is surprisingly good and even better with anchovy sauce. Lemon is tricky with a tartare. I need the freshness of lemon but do not want to cure the flesh as in a ceviche, so I use the zest and add a squeeze of lemon right at the end. I finish with a salad garnish.

The basic ingredients. For the tartare – (salmon), shallot, parsley, mustard, anchovy sauce, capers and lemon zest. For the garnish: tomato, roasted peppers from a jar, cucumber, chives and parsley. Worcester sauce is used in the egg garnish only (see below).

Chop the salad garnish and put in a bowl ready to mix with a vinaigrette dressing.

100g of good salmon. More than enough for a single starter portion.

Chop with the other ingredients. Mix these to taste. I cut back on the shallot.

Soak the capers in a couple changes of water squeezing out the water. Soak the shallot in water for 15 minutes and dry.

I was not keen on a raw egg on my salmon so I soft boiled my eggs, used the yolks only. Mix with a tablespoon of good thick creme fraîche. Season with salt and pepper, tabasco and Worcester sauce. Add a pinch of xanthan gum powder and form into a quenelle. (Yes, a home cook can use xanthan gum – it’s available at Lakeland.) touch over the egg.

The finished tartare. Form the chopped mix into a patty and add the egg yolk quenelle. Sprinkle unsmoked paprika as finishing touch for the egg. Arrange the salad garnish. Drizzle with extra olive oil and serve with lemon and a slice good crusty toasted bread. It’s really good.

Raw fish in the form of sushi was once a esoteric rarity, only available to the travelling cognoscenti. But having been popularised by Yo! Sushi! it’s now omnipresent on the shelves of many fast food outlets such as Pret a Manger, Wasabi and Itsu, or even your local supermarket. There has also seen a rise in sushi bars and restaurants, from the accessible and reasonably priced Sushi Tetsu, to the exclusive and astronomically priced Nobo. But you know what? You don’t need to buy sushi from a chain or an expensive restaurant – you can make it at home.

Start making the rice. First rinse the rice. The Japanese have a knack with this. It involves kneading, swishing and straining with the palm of the hand. I don’t get it, I’m afraid, so I use a whisk instead. Rinse the rice about 5 times until the water is clear, as in the photo. By volume I measured 200ml of rice in a measuring jug. This was enough rice for about 14 balls of rice.

Let the rice drain for 30 minutes. This is actually allowing the water to penetrate the surface of the rice rather than ‘drying’.

Put the rice with 250ml water in a heavy pan with lid. Bring to the boil then immediately turn the heat down the lowest setting, put on the lid and cook for 15-20 minutes. Turn off the heat and let the rice steam for 10 minutes.

Make a sushi dressing by gently heating 70ml rice vinegar, 45g sugar (yes – it does seem like a lot! – but you know how the Japanese like their sugar…) and 10g salt. Put the cooked rice in a bowl.

Fold the dressing into the rice – add to taste (I did not use all the quantity I made). Then spread the rice out to cool. In a Japanese home or a sushi restaurant the rice is served ideally a little warm. But at home it is unlikely that we will have the ability to time to this exactitude. Instead, leave the rice until ready. NB: there is sufficient acid, sugar and salt in the dressing to prevent the breeding of harmful microbes in the rice. It will be safe to leave out of the fridge for an hour if necessary. Ideally, serve with cold fish on room temperature rice. Failing guests arriving on time – do use the fridge, especially to keep the fish fresh.

Now the fun part. Making the little balls of rice for the sushi. Use cling film to begin with then form into squat sausage shapes. I find there is not other recourse than to use moistened clean hand – but keep the wetness to an absolute minimum. When you will finish you will know what they mean by ‘sticky’ rice!

Make a mooli garnish while the rice is cooking. Peel the mooli and make julienne slices with a special julienne tool. Freshen the mooli in a bowl of cold water for 10 mins and drain well.

Now the fish. I have used a middle cut of a side of salmon. This piece shows the portion that is suitable for raw fish. It is about 825g. I made all three raw dishes from this single piece – enough for raw starters for two from each recipe, a hot pasta dish from two from the remainder and even a dish of nice brown meat for the cat.

Turn over the fillet and slice off the skin and remove the skin and dark meat – use your best stainless steel knife.

Cut the fillet in half along the original length of the side of salmon. This leaves a thick top half of the filled. I don’t own a sujihiki slicing knife or a yanagiba sushi knife but I do have a Miyabi gyutoh – Western balanced – cooks knife. This knife is thinner and can be made sharper than any of my carbon steel knives. It is also stainless steel so the metal will not taint the delicate fish (which carbon can).

This is much easier than it may seem. With the right knife the salmon cuts like butter. Make your sushi pieces and store in the fridge until ready to prepare.

Form the balls of rice into the shapes shown above, put a little wasabi on the rice. Add the wasabi to taste, I have used quite a lot (!).

Put the fish on each and decorate with chopped chives.

Add the mooli salad garnish and a dipping bowl of soy. All done. Now all you have to do is stop yourself eating it all before it’s ready to serve! Absolutely completely delicious…