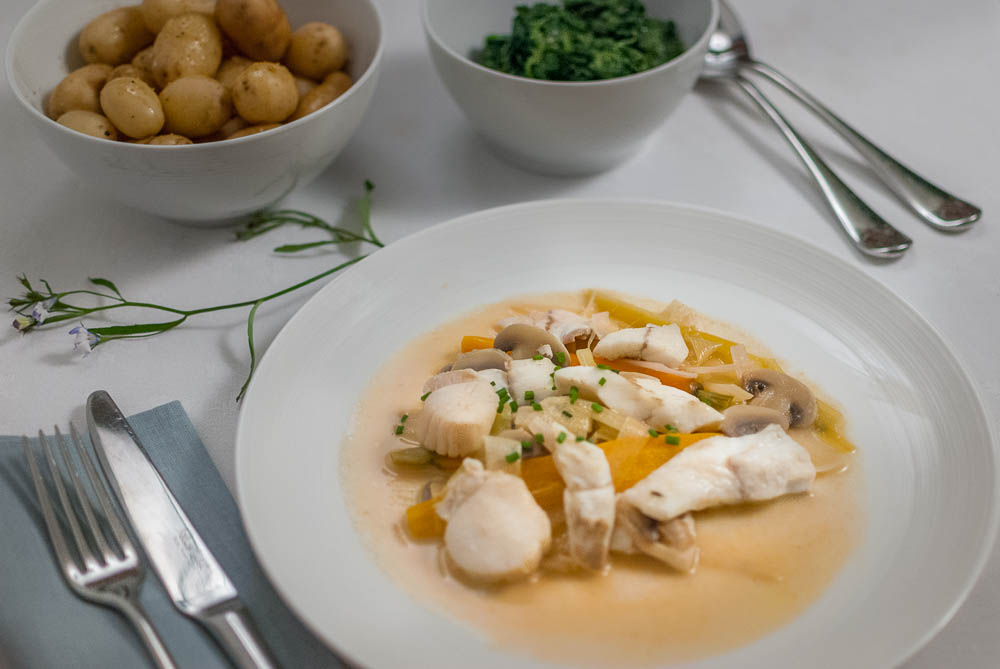 4 large scallops with roe, sliced in half

The top green part of one leek

For the fish and sauce

White part of the leek from above

Chives or parsley to garnish

Oh no! The fishmonger has filleted my turbot!

I asked for turbot, but somehow it got filleted. Surely, a fishmonger would discretely balk at the notion, politely asking if I was sure I wanted my turbot filleted. They, along with the cognoscenti of the fish-eating world, know that cooking turbot ‘on the bone’ is sacrosanct – repeating the maxim: you cannot improve on a tranche of turbot cooked simply in butter and lemon.

And it’s not just turbot. Chefs also agree on the benefits of cooking any fish whole. Nathan Outlaw says cooking on the bone is more forgiving and allows the fish to be ‘rested’ like meat; Marcus Waring says that cooking on the bone enhances the flavour and Mark Hix says the practice of cutting out middle fillets is wasteful and unsustainable – cooking fish whole is doing the ocean a favour.

But when it comes to turbot, there is another particular reason for cooking the fish whole – its astronomical price tag. Turbot is the ‘king of fish’, the chateaubriand of the fish world. Such an exquisite and noble fish should not have to suffer the indignity of being sliced and cut into commonplace fillets. It is therefore a matter of propriety that the fish should be cooked whole and presented to the table on a grand platter, such that its entire magnificence may be celebrated. The cook may then gracefully acknowledge the justification of the expense through not only the impressive display of such fine quality fish, but also the appreciative coo’s and ahh’s of admiring guests.

In the meantime, I have found and adapted a recipe using fillets of turbot.

This recipe is based on an early paperback recipe book by ‘Richard’ Stein ‘English Seafood Cookery – 1988’ published before he became a popular television personality.

The recipe requires making stock from the bones – something I always do. Scallops come with roe which are fine to poach with the fish, but I use the roe in the sauce, which lends a nice hint of pink to the proceedings.