‘We’ve showed you how to make a 10 min cheat sticky toffee pudding, but here’s how to make from scratch.’ 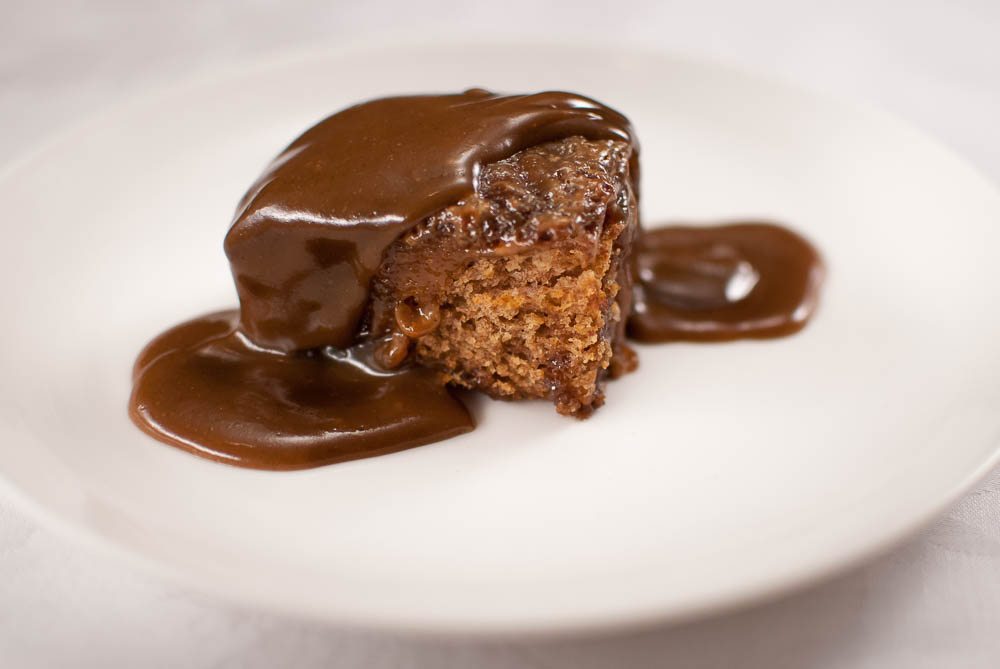 The sticky toffee pudding recipe used imperial measures. I found it easier to change the setting on my electronic scales, but I have shown metric units as well.

For the toffee sauce

This sticky toffee pudding is adapted from a recipe developed at the Sharrow Bay Hotel in 1960. It’s published in the Posh Nosh Book by Michael Smith (BBC ‘Pebble Mill’ 1979). Michael Smith presented Grace and Flavour and Posh Nosh, two cookery spots on Pebble Mill. These programmes are now lost in time – forgotten formats from the age of TV cooking when Delia Smith ruled the roost; when Derek Cooper broadcast the first Food Programme on BBC Radio Four and when we would need to wait another five years before Keith Floyd would hit our screens, enlightening us with his gastronomic knowledge whilst cooking on windy quaysides…

Posh Nosh is a fascinating insight into the culinary scene of the late 1970’s. It was conceived to celebrate a new breed of cooks emerging across the country, all of whom shared the status ‘gifted amateur’ rather than professional trained chef. These included the Roux brothers of the Waterside Inn, who qualify on a technicality, Nico Landenis of Chez Nico and Brian Sack and Francis Coulson of the Sharrow Bay Hotel. Smith says all the restaurants featured have been lavished with stars from the leading guides – but by this he means Egon Ronay as much as the Michelin Guide. Michelin stars were clearly scarce in those days and commentators might have been unwittingly ambivalent in appreciating their significance. Smith gives an oddly qualified compliment to the The Box Tree (also featured in his book) saying their two Michelin stars were ‘high praise indeed – from the French‘. These days, when Michelin stars are commonly recognised as a universal standard of excellence, it is easy to forget that the awarding entity is indeed a French hotel and restaurant reference guide.

Francis Coulson was a significant figure in the development of county house hotels, leading the way at Sharrow Bay with its accolades and awards, but sadly both Sack and Coulson did not live to see their hotel eventually attain its own Michelin star (which it received and kept for four years in 2008). But in their time the twosome went from strength to strength; Sack looked after the front of house and Coulson worked behind the scenes preparing service. Coulson was also a talented pastry chef excelling at puddings, pies and pastries. He’s credited as the originator of the sticky toffee pudding – something that in itself that might have stood as an epitaph for his career.  Coulson said that pastry-making is an art that comes as much from the heart as the hands – an fine sentiment coming from someone who would have known the exacting rigours of a pastry kitchen. I wonder what he thought when he saw his ‘posh’ sticky toffee pudding appear on the dessert menus of hundreds of restaurants around the world. No doubt he would have imagined his achievements greater and more encompassing than a mere pudding. Still, in the over-heated culinary world – where the latest trend and invention is ferociously sought after – who wouldn’t be proud to see their pudding become a timeless classic, effortlessly rising above the epicurean melee.

Finishing the pudding is in two stages using the same toffee sauce. The pudding can be made in advance and quickly heated before serving.