‘We think Dad’s Caesar dressing is heavenly, let us know if you agree?’ 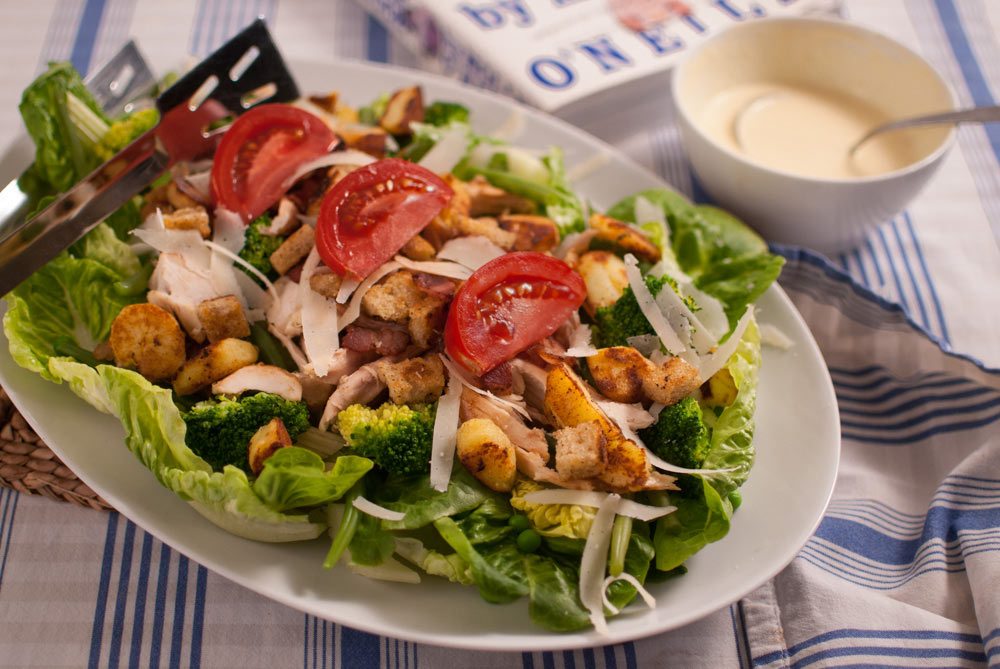 1 thick slice of sourdough – or other – bread

For the dressing
Large pinch salt

Caesar salad was invented by Caesar Cardini in the late 20’s. Caridini owned restaurants in America, but also in Tijuana, Mexico to attract Americans avoiding prohibition.

Much has been lost in translation when it comes to the original Caesar. The first salad was designed during a night when Cardini’s kitchen supplies were depleted. Presumably the elaborate table-side, whisking and tossing theatrics were quickly improvised to disguise the relatively meagre ingredients (bread, lettuce and bacon).  Since then the salad has become famous and is served throughout the world, Caesar’s original ‘theatre’ has gone and the salad augmented with the ingredients of a fully stocked larder: avocado, chicken, tuna, prawns, steak, and just about anything else you can think of…

In finer US restaurants it is served as a starter, or a main course for lunch – or a light, late dinner. In the UK it features on most menus as an ‘all day breakfast’ affair, where you choose your size and ingredients.

At WDC we make any number of variations depending on our mood, appetite and the contents of the larder. This fully loaded version attempts at a more balanced meal, including potatoes and extra greens. I like tomato with Caesar dressing – when they mingle it creates a deconstructed Marie Rose sauce. This must be why there are so many versions of a Caesar salad – the dressing is infinitely versatile and makes anything taste better.

If using egg is a concern – coddle the egg or boil to soft-boiled stage and then use the yolk. Otherwise omit and use an additional 2 tablespoons of creme fraiche or two tablespoons of store bought mayonnaise.