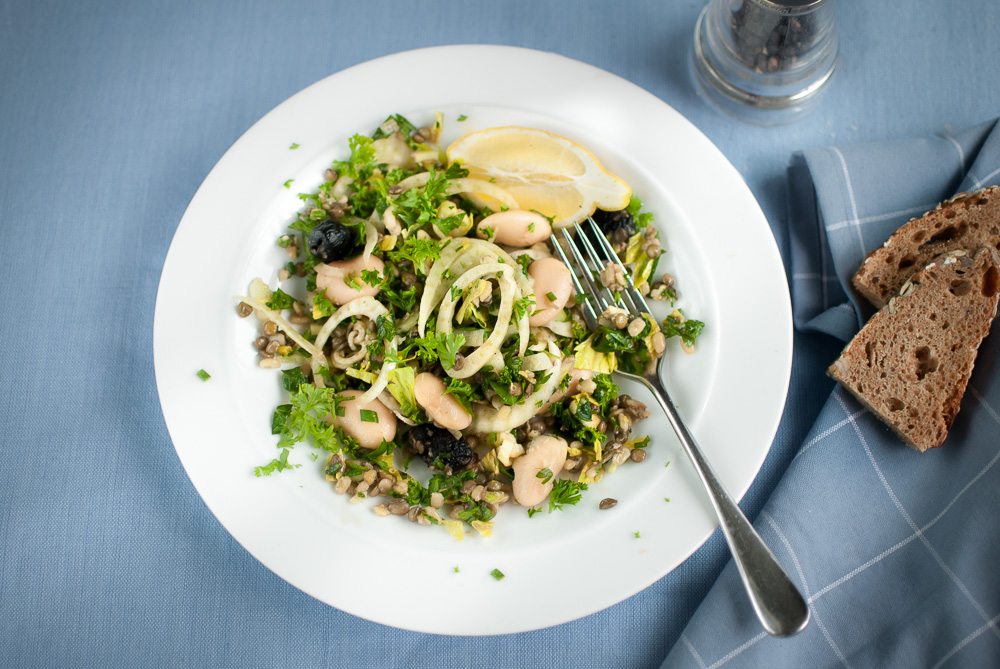 2 sticks of celery, including inner young leaves if possible

Dressing made from good olive oil and wine vinegar or lemon (3:1 proportion – oil:vinegar/lemon)

This is one of a series of modern  style healthy salads. Mine will be like hundreds published in the food media. And so can yours – there is no great secret. Just combine a selection of raw vegetables, cooked pulses, beans, grains, dried or fresh fruit and nuts. Add some traditional salad ingredients, or colourful leaves, herbs or flowers. Use crispy bacon, or tuna if you like, but often these salads work best when following vegetarian principles so chunks of cheese are always welcome. Ensure there is a savoury background, lots of fresh tastes and something crunchy. Lubricate with dressings made with different oils and vinegars, fresh cheeses or yoghurt, or nut creams.

I  believe these styles of salad originate somewhere between  London and anywhere in the Levant. Back in the 60s Cranks opened their first wholefood restaurant in Carnaby Street. Here surely is where meals based on legumes, grains and nuts influenced the popularity of vegetarianism and so-called ‘health’ and ‘super’ foods. But sometime later, these alternative (and perhaps a touch too earnest and dour) dishes of hippy goodness were finessed with the influence of the Middle East. More exotic ingredients were introduced – chillies, aubergine, pomegranate. New spices and mixes such as sumac, za’atar, and dukkah added an exclusive allure. Soft fresh cheeses such as labneh were made into sauces and tahini turned into dressings. There’s the combining logic of the mezze and the grain-with-herb sensibility of the tabbouleh.

My first recollection of these types of dishes were by Ottolenghi. I called them ‘scatterings’. I imagined that in the realm of the no-expense-spared and anything-is-possible experimental kitchens, our celeb chefs and cookery writers gather pots and bowls of myriad ingredients and gleefully scatter their contents randomly onto plates. This continues until somebody says, ‘that’s nice’, and the plate is taken off to be photographed and the ingredients documented. This process also reminds me of a school art class because ‘scatterings’ have something of the abstract painting or collage about them. If the available ingredients are a palette of colours and the plate is a canvass, then the recipe is the final composition. It needs to have the right balance of elements, but most importantly it should also be pleasing on the eye: bold background shapes, contrasting and complementary colours, smaller dots of detail and a few perfectly placed wispy flicks. Just as in a real painting, over-working the canvas can lead to diminishing returns. We might be advised to ‘paint’ with a lack of conscious discipline and ‘scatter’ from the heart, rather like Jackson Pollock, or we might approach the task with the more controlled and informed abstractions of a Kandinski, Miro or Schwitters. In this way we could create an infinite collection of salads on plates, rather like Damien Hirst’s ‘spin’ and ‘spot’ paintings. And although each ‘scattering’ should be worthy, I suspect that just as in the real art world, only a few creations will stand out as inspired pieces of quality and originality.

So my fennel, lentil and bean is salad will be the first to be hung in my ‘scatterings’ gallery. It may not be a masterpiece, but it’s certainly pleasing on the eye – and it tastes great.

The only tricky part of this recipe is cutting the fennel. I gave up using a mandolin for slicing vegetables long ago and instead use a knife. As you can see in the photo, I have not tried to emulate the paper thin slices possible on a mandolin. So my recommendation is sharpen whatever knife you have and cut as thin as you can and don’t sweat over it – thicker slices is fine.

I have found that dried black olives are loaded with extra salt. (6g-7g/100g – that’s a small pinch of salt per olive!) Non-dried black olives have half the salt. To remove excess salt, throw the olives into the lentil pan five minutes before the end of their cooking time and drain with the lentils. This helps season the lentils and dilutes the salt in the olives.

I like to season the lentils whilst they’re still hot after draining. I also add a little dressing so it also gets absorbed into the lentils. Add the vinegar or lemon first, stir, then add the oil.