‘We’re not sure about Dad’s method of making meat cylinders – happily we were none the wiser – in any case, the lamb tasted great!’ 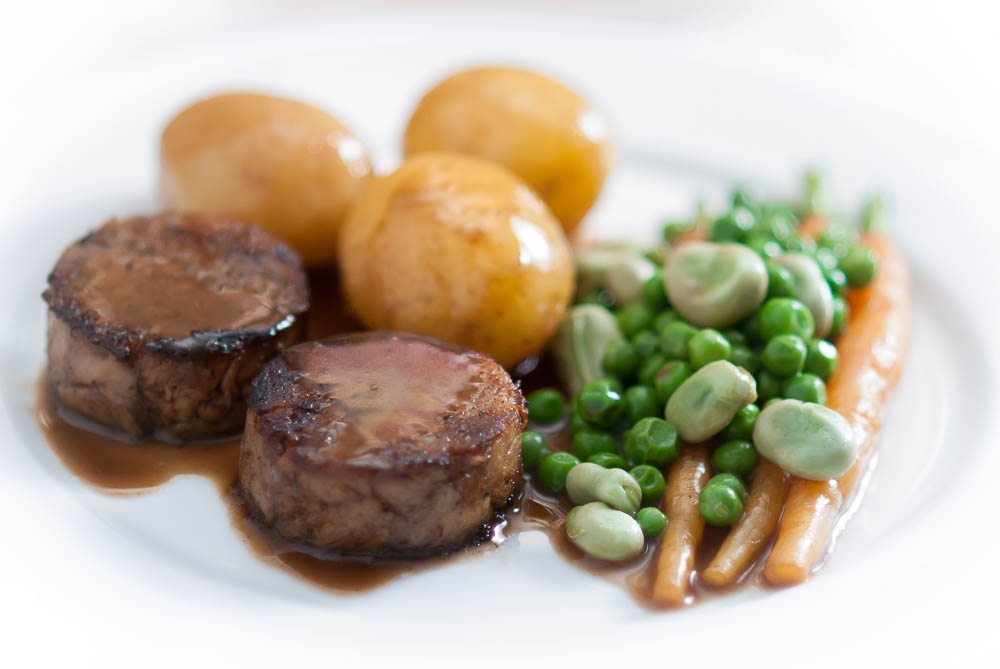 This is not a precise recipe, though it is based on Jason Atherton’s recipe in Gourmet food for a fiver. Essentially we are braising and extracting meat from a cheap scrag-end cut of meat and then forming it into compressed and solid pieces. It’s a lot of work. A restaurant may be able to justify the effort as part of their philosophy of using every available part of the animal – or simply because they have the staff.  A simpler way to enjoy lamb is to buy a leg or shoulder joint and roast it in the oven.

The belly should be cut into large pieces and cooked in a braise. I browned the meat and put it aside. I sweated onions, celery and carrots in the pan with bay leaves and some whole peppercorns, thyme and rosemary. I added a tablespoon of tomato puree and cooked this down – then I added a large glass of white wine and reduced this down. Then I covered the meat with stock and water, covered the pan with a lid – slightly a jar, and put it into an oven. Harold McGee recommends monitoring the temperature carefully: keep the temperature at 50C for two hours, then increase heat to 80C. Continue cooking checking every half hour – if it is easily penetrated with a fork stop the cooking and allow the meat to cool in the liquid. When cooked and cooled, I picked the meat from the belly – trying to keep it in large pieces. Remove the sinew and fat whilst separating the meat.

If the collected meat is still very fatty – it might be necessary to heat gently to melt the fat and drain it. The idea is to roll the meat into a cylinder (about 4cm in diameter) using several layers of cling film. Try to compress the meat together as much as possible. No doubt in a restaurant there would be tools for this. Probably more high-tech than my cling-lined loo rolls. Then cool in the fridge for a couple of hours or more.

To make the sauce reduce 50ml of port with 15ml balsamic vinegar, add 600ml of the braising liquor and a few dried porcini mushrooms: reduce by a third – put the remainder in the freezer and use as lamb stock. Whisk 25g of butter into the sauce.

Steam new potatoes with their skins until tender and then cool slightly and peel the skins carefully. Put the potatoes into a baking dish with the sauce and bake at 190C/gas 5 for 20 mins turning half way through.

Boil the broad beans and peas until both are only just tender. Cook the carrots separately in a little butter and a splash of water in a covered thick bottomed pan. Add more water if necessary during cooking.

Carefully drain and strain the sauce from the potatoes and reduce if necessary. More butter would be added in a restaurant.

Cut the meat into lengths about 6cm – or as I have done into 2-3cm widths. In a non-stick pan gently brown the shapes in a little olive oil adding some of the sauce to glaze.

Plate the meat and vegetables and serve with the sauce.