A Sloppy Joe is a classic American sandwhich, made with a loose mixture of minced beef, onions, peppers and tomatoes served heaped in a burger bun. It’s supposed to be messy. Here I’ve swapped out the meat for tuna and added corn with the peppers. It works a treat. If the ‘sloppy’ way with a bun does not appeal, make the mix and add on a baked potato, rice or in pasta. 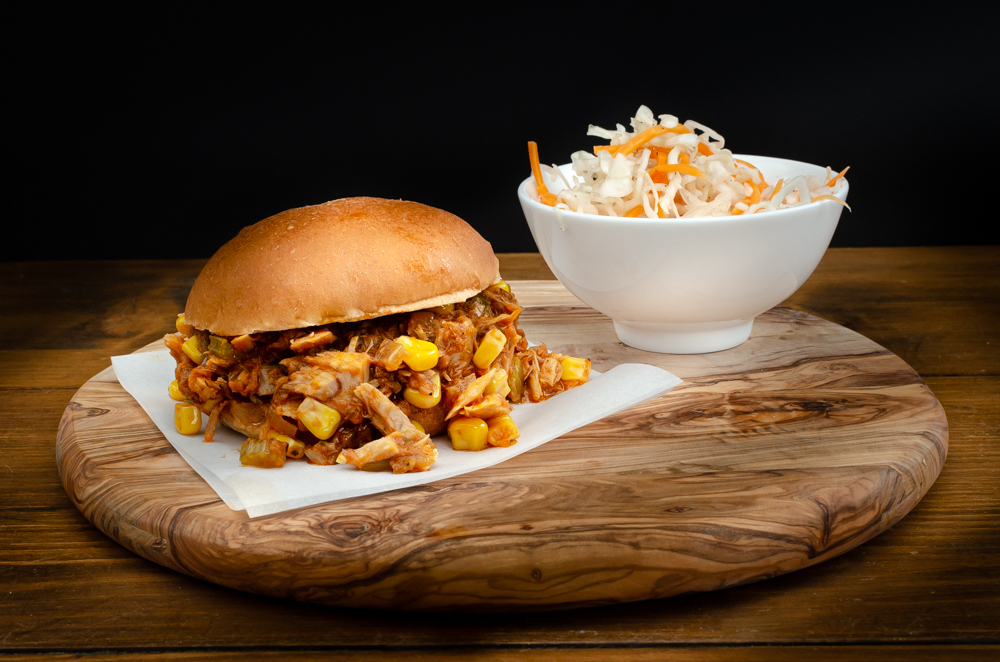 1 tsp Cholula sauce or other chilli sauce to taste

Picture the scene: Inspector Poiroit is sitting at an elegant dining table in a grand country house. He is cautious, carefully observing his fickle guests for possible motives, but he is also carefully guarding his immaculate evening attire with a large napkin tucked deeply into to the front of his crisp collar. For you see, Poirot, he mistrusts the treacherous food, as much as he mistrusts his slippery guests…

Now imagine a crowded carriage, the last train out of London Waterloo on a Friday or Saturday night (pre-covid of course). The same jeopardy is evident among the unreliable passengers – they are also negotiating tricky and uncooperative burgers, chips, sauces, wraps and other dubious takeaways – most of which will be scattered or spilled on clothes, seats, fellow passengers and the floor. Unfortunately, none of the protagonists in this scene is equipped with Poirot’s protective napkin. It’s all very messy.

We can’t seem to avoid messy foods, whether we are eating takeaways or fine dining.

With this in mind, I thought it would be intriguing to investigate the world messy food.

Here are my top 10 culprits.

Most adults do not make a mess when eating an ice cream cone. Not so, a toddler. At this young age, one is still learning the fine distinctions between licking ice cream with the tongue, sucking ice cream with the lips, or smearing ice cream over the face with the hands. Most notably a soft cone, such as a Mr Whippy, will soon release melting flows of white goo, gradually covering the child’s face, smudging their hands and dripping onto their brand new outfit. In worst-case scenarios the entire bulk of ice cream will be dislodged from its mount and topple onto the lap. If lucky, the cone will fall onto the street, but either way the screams of distress will result in replacement ice creams and a repeat of the mess-generating process.

One of our boys was very fond of chocolate ice cream, especially as a toddler; at the time, this created the same messes as above, but with extra staining power.

At one time or another, we might all have had an accident trying to extract a stubborn blob of ketchup from the ketchup bottle. However, if ketchup is first dolloped, spread or squeezed onto something we eat, usually, we find it will also be the first thing that drips onto our clean white shirts or blouses. A little ketchup on our clothes may not sound that bad, however, I have seen many fastidious people go ballistic at the sight of a tiny drop of ketchup on their otherwise clean clothes. So beware this pesky red puree, it could be out to get you.

There are certain etiquettes to learn when eating spaghetti. First, one either eats with a fork in one hand, twisting the fork into the plate to twirl strands around the fork, or one eats using a fork and spoon with two hands, enacting the same movements as the first method. However, under no circumstances does one slurp or suck spaghetti into the mouth. Unfortunately, as we all know from our own early experiences with spaghetti, slurping and sucking is almost impossible to discourage.

For the determined slurper and sucker, surprisingly long strands can reach very high velocities, twisting and flicking – all the while spraying and splattering sauce on guests and table – until with a final whip, it disappears into the mouth with a satisfying smack.

Most spaghetti sauces are based on tomato, which is notoriously staining, it is therefore customary – if not practically advisable – to follow Poirot’s exmple when eating spaghettin, and wear a protective napkin.

There will come a time in everyone’s life when eating a donner kebab becomes compulsory. Usually this happens after a night of heavy drinking with mates. At these times, one can develop manic cravings for donner kebabs, compounded by irrational decisions – such as ordering extra chillies, chilli sauce and yoghurt. The main ingredient driving these wild urges is hot, meat, and like all delectable hot meat, donner kebabs exude fat and juices, which, when mixed chilli sauce and yoghurt will produced a steady stream of contaminating glop.

Of course, donner kebabs come in their own neat protective package of pitta bread. Unfortunately, those who eat kebabs whilst under the influence, are also unlikely to possess the tactile skills to control the greasy jumble of contents, much of which will escape from ruptured pitta pouches and find a home on clothes, pavements and public transport.

The mess created by food rolled up in a wrap is explained by Newton’s third law of motion: roughly stated, all forces exert an equal and opposite force. In other words, squeezing one end of a tube of food, will force the expulsion of food from the other end. Of course, we all intuitively understand this, which is why we always fold the end of a wrap up before rolling or folding. Never the less, such safety measures are not a guarantee that the flap will be fail-safe. The forces of nature can cause tears and rips at any point on the surface of our fragile wrap, risking an explosion of contents.

Most people in the UK probably do not think a hamburger is messy. As an American, I believe this is because they are not eating proper hamburgers – well, at least not the kind I remember eating.

Fast-food burger outlets will always cook burgers very well done, so there is not much mess. Adding creamy sauces will compensate for any dryness in the meat, but even this does not tend to ooze from the bun. In fact, I believe fast-food companies design their burgers NOT to be messy for the very good reason that customers grazing burgers on the hoof might leave dangerous slippages on the pavement.

Establishments that claim to sell ‘authentic’ burgers must also cook their burgers to required safe temperatures, driving out most of the juices and fat in the meat – so not a lot of mess to be found here either…

My ‘real’ hamburger is a memory of a hamburger from proper American diners and family restaurants back in the days when it was legal to have sticks stuck in the bun displaying how the burger was cooked: ‘rare’ ‘medium rare’ ‘well done’. I always ordered my burgers rare and there was always plenty of drizzly juices.

One favourite establishment provided a condiments counter, where the burger could be loaded with the usual mayo, mustard and ketchup, but also dill pickles, chopped olives, cheeses, salads, mushrooms, chopped peanuts and more. This made an amazingly messy – and delicious – hamburger.

We should not be surprised that a taco is messy. It’s in its DNA. Any item of food that requires assembling several individual ingredients all layered into a small tortilla and eaten with the fingers is going to be messy. The trick is to share tacos with a group of people. In this way, taking part in an act of communal messiness become cathartic – and quite good fun too.

However, some tacos are unnecessarily messy. These are the crisp type sold by ubiquitous Mexican fast-food chains. Here Newton’s third law is always evident – biting one side of the taco will inevitably expel a blob of filling from the other side.

Depending on the contents, burrito mishaps will be minor, or catastrophic. The burrito is related to a wrap, but much messier. A burrito tends to be over-filled with floppy contents, usually loose mixtures of meat, sauce, chillies, avocado, cheese, dairy creams and salads. Burritos can be big, really big, or just so big it’s silly.

A big burrito is impossible to eat without also making a big mess, so it advisable to eat your burrito over a large plate or bowl and shower soon after eating.

The ultimate finger food. In fact, it is not only finger food, but also teeth food – because the teeth must gnaw the meat from the bone. Altogether, a very messy way to eat.

The particular ribs I have in mind are the ribs from the original Chicago Rib Shack in Kensington. Here the well-heeled could delight in a playful evening’s indulgence of being messy at the table. Such was the overt acceptance – or promise – of a messy eating experience, that being fitted with plastic bibs at the start of the meal was mandatory. To keep things sensible staff also provided a steady stream of hot moist towels during the meal.

The ultimate in messy food. The origins of the Sloppy Joe are uncertain, but most stories relate to the owner of a Cuban bar who, sloppy by nature had acquired the nickname ‘Sloppy Joe’. Whether by accident or design, Joe created a sloppy dish of loose meat, onions and tomatoes in a bun. Although very messy and difficult to eat, Sloppy Joes are eaten with the hands (perhaps with a fork on the side) and always whilst sitting at a table.

The idea of messy meat on bread may seem unique in the Sloppy Joe, but there are many precedents in America. The French dip is juicy strips of steak on thick bread and then drenched with hot beef jus, the resul is a rather soggy mess. A chilli dog starts as a perfectly neat hot dog in a bun, but is finished with a deluged of slushy chilli, meatball and meat loaf sandwiches are made with tidy pieces of solid meat, but are then smothered in tomato sauce. All of these, in their own way are quite sloppy.

After exploring this world of sloppyness, it seems we are not entirely discouraged from the idea of messy food. Perhaps we are responding to some deep, primeval, or essential human instinct.