Rillettes are normally associated with rabbit or pork and rely on slow cooking and plenty of fat. This tuna and sweetcorn version cooks the ingredients as a confit, swapping olive oil and butter for the fat. 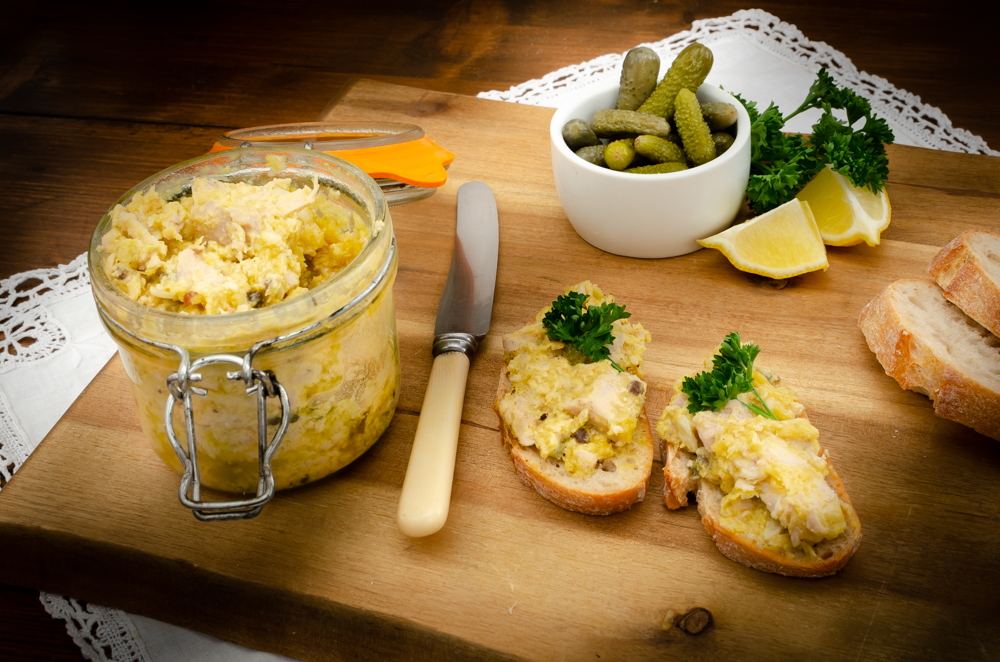 Juice of half a lemon

Baguette, cornichons and lemon to serve

The Allure of Rillettes

Rilletes, those little jars of potted tender fatty meat, were once the guarded secret of the gourmand and well-travelled foodie. Only they knew of their rustic French origins and isolated availability on the tables of Relais Routiers in France, or particular brasseries and French restaurants in the UK. I do not consider myself a gourmand or a travelled foodie, but with my library of food encyclopaedias, cookbooks and food writings, I was familiar with rillettes in the days before they became commonplace on gastro pub menus and supermarket shelves.

Elizabeth David’s French Provincial Cooking mentions them, she understood that although some meat was best enjoyed without preserving as rillettes, the ‘potting’ did lend leftover goose, rabbit or pork a fine flavour. Richard Olney, another Francophile, recommends making terrines from ‘furry creatures’, which sounds a lot like making rillettes from rabbits. The Roux family have always espoused their love of the classic French repertoire and never been afraid to fill their books with complex and time-consuming potted recipes of terrines, pates and rillettes, made from all types of creatures, including fish.

Although I never made rillettes, I was quite familiar with the concept of slow cooking meat: the obsession with temperature; the patience needed to denature meat and connecting tissues into unctuous shredded fibres and collagen; and the sloshing pans full of hot rich fat, which stubbornly adhered to clothes, utensils and kitchen counters – all necessary to achieve the distinctive tastes of confit duck, rillettes de lapin, terrine de porc.

With this background, I was duty bound to order these elusive and secretive pots when the opportunity arose. The chance took a long time. I do not often frequent brasseries and good French restaurants, and though I have been to a few gastropubs, I somehow never managed to order the rillettes. At The Hope and Anchor near Waterloo I had a globe artichoke instead (one has to have priorities). At the Great Queen Street in Covent Garden I had the neck of lamb, which embarrassingly for my companion kept me buried in a heap of bones for half an hour. And though I never made it to The Eagle (the original gastropub), I did buy The Eagle cookbook but became too busy cooking David Eyre’s Portuguese inspired braises and Tom Norrington-Davies’ excellent coriander rice to explore potting meat.

It was therefore with great delight that I finally found the right time and place to order rillettes. It was at a large family gathering in the Princess Victoria gastro pub in Shepherd’s bush. I knew immediately upon reading the menu that this was my rillettes moment, and I seized it with huge anticipation. To raise the gambit further, I was the only one who ordered rillettes. And yes, I do admit to feeling a little self-satisfied as the other diners cooed in unison, nudging me to comment on the provenance and making of rillettes.

My rillettes eventually arrived in a little sealed pot and looked suitably intriging and posh. I tucked in, nodding approvingly when I caught a guest’s eye. I was reassured – they tasted just as I imagined they should taste, however, later, as the table was being cleared, I was unsettled by a nagging feeling that I might have been a little disappointed…

In fact, I learned a valuable foodie lesson: don’t count your rabbits until you’ve tried them in the rillettes – or, in other words, don’t over fixate on the latest new ingredient, trending recipe or restaurant creation, they might not match your expectations. Rillettes are delicious – nothing more, nothing less – just enjoy them when you can.