‘BBQ for best results, but the grille will do too…’ 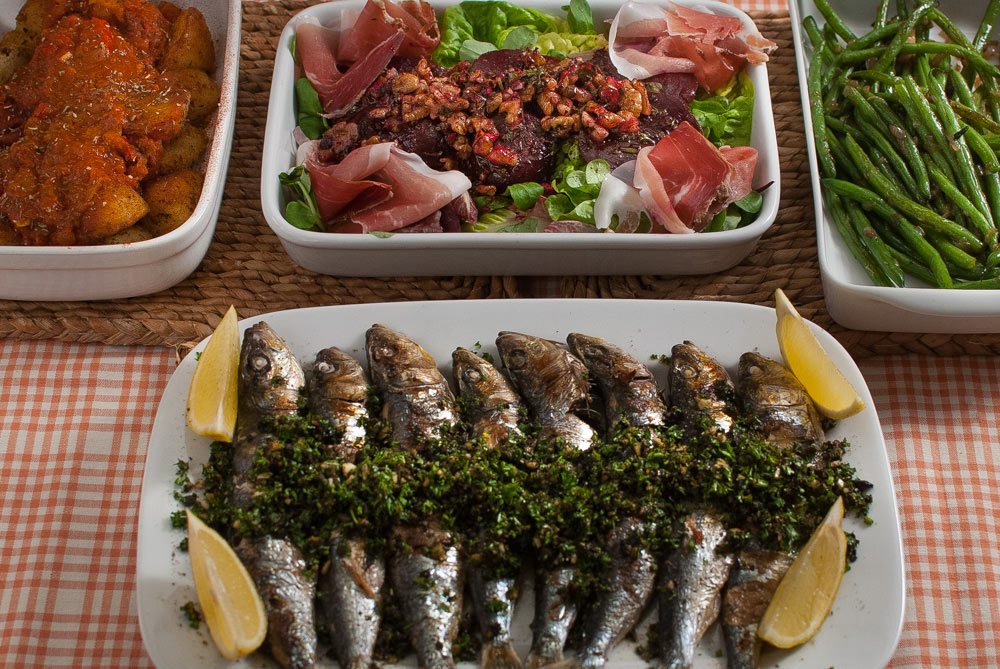 4-8 sardines depending on their size and one’s appetite.

Zest of one lemon +plus lemon for finishing and serving

The fish were under attack by wasps today.

The fishmonger said, with positive enthusiasm, that at least wasps are clean and keep the flies away. I was studying the wasps as they buzzed about on the salmon. I somehow imagined that they were just frolicking, enjoying whetting their mandibles on the savoury moisture of the fish. Not a bit of it. They were furiously excavating with lethal intent – each wasp in turn mining a chunky nugget of pink salmon, securing the severed flesh in their clamped jaws and flying off with their loot! The fishmonger had to remove the tuna from the stall – he said it was too valuable to donate as wasp food.

I was not particularly put-off by the wasps around the salmon – but I noticed that there were very fresh sardines hiding under a mound of ice. They were such good value that I asked for eight – thinking if we could not finish them the cat would. It became too late to use the barbecue. But I would recommend that if you want grilled sardines, do them on the barbecue – and preferably over coals. It really does make a difference. I’ve based the cremolata on a Moro recipe – as an alternative you could try marinating them for half an hour in lemon, garlic, salt, pepper and oil, with dried oregano and fresh thyme.

I served the sardines with patatas bravas, I did not deep fry the potatoes but boiled and sautéed them – it seems healthier. I also served green beans with shallots and garlic, and a salad using leftover beetroots with extra walnuts and speck. But of course you could just serve them with salad and crusty bread.

1. Salt the sardines and leave for half an hour.

2. Make a cremolata: chop together the garlic, parsley, olives and grated lemon or orange zest. Moro add chopped green olives – I only had black and used rather a lot. It had the effect of turning the parsley dark and nearly into a tapenade. It was good – but stick to a few green olives.

3. Get the grill or the barbecue very hot and grill the fish until cooked through. Allow them to blister and brown during cooking. They may stick to the bars. How to avoid this is the subject of much online content. Here is what I do; make sure the bars are clean and very hot – I oil them using groundnut oil on a kitchen towel held with tongs before putting the fish on the grill. I don’t fiddle with them – waiting until the fish have are cooked through on one side before turning. I ensure there is space on the barbecue to flip the fish into so that they are manipulated as little as possible. They may still break up – but that’s life, not poor technique.

4. Plate the sardines. Add a good squeeze of lemon, drizzle with olive oil and serve with the cremolata and lemons.