Jerk Chicken with Rice and Peas

‘So Dad actually wrote this when everyone was getting excited about Notting Hill Carnival! But actually it may be winter now but it’s still a knock out jerk chicken recipe. It’s simple, easy and packed full of flavours from the Caribbean.’ 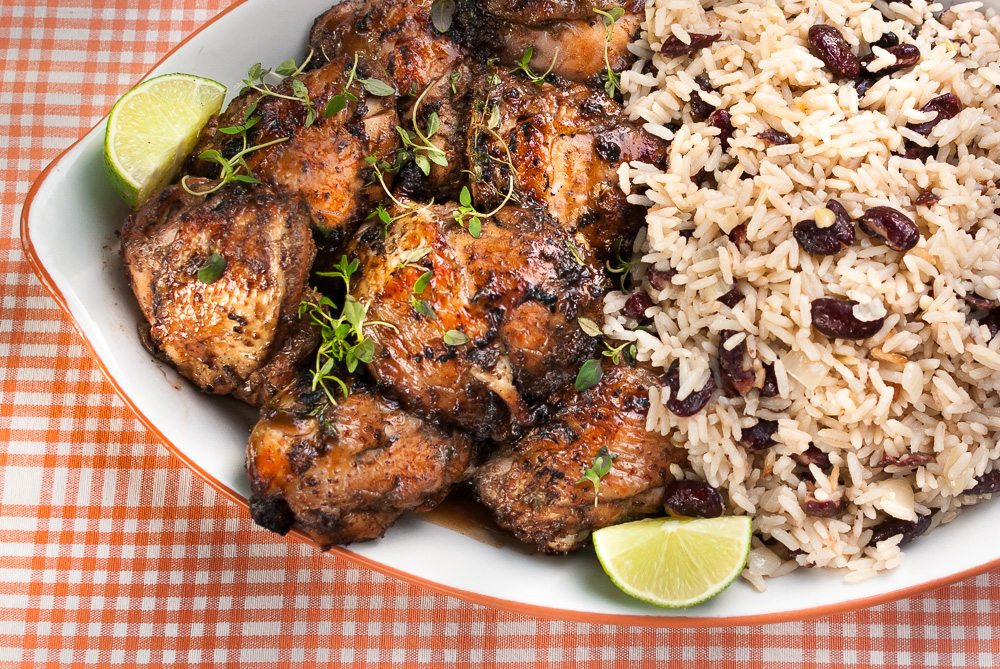 For the jerk chicken marinade

For the rice and peas

It’s odd that jerk is not more common among non-Caribbeans. Perhaps we don’t embrace jerk because we associate it with ‘barbecue’ food or because we think it’s hot!

It’s true that the barbecue brings out the best in jerk. And with so few good barbecue days in the UK, we might be forgiven for overlooking jerk in favour of the usual or ‘standard’ barbecue sauces. Still, we don’t need a barbecue to jerk – it cooks just as well in the oven.

And yes, jerk can be hot. It’s not surprising – a key ingredient is the Scotch bonnet chilli. On the Scoville heat scale the Scotch bonnet scores highly – up there with the habanero and bird’s eye chillies. However, in the chilli world of relativity, the Scotch bonnet is feeble, the appropriately named Carolina reaper or Trinidad scorpion are ten times hotter!

Whatever your views about jerk – it’s still one of the best marinades for grilling meat, like jerk chicken!…

As I was passing ‘Jerk World‘ in Leather Lane, London, I decided I’d go in to do some research on making jerk. I ordered some chicken with rice and peas. It was served with a delicious thick ‘jerk’ sauce.

‘So, how do you make your sauce,’ I asked innocently. Sharp intakes of breath by all around.

I made my exit – the shop assistants still laughing in the distance.

Jerk: another sauce I’ll have to workout for myself…

This can be served with separate jerk sauce – see my recipe here.

Make the jerk marinade. Put all the ingredients in a blender and blitz until it’s a smooth paste. NB: Scotch bonnets are very hot chillies. You can cut back on these but remember the overall balance of flavours will need some heat. Try putting in one chilli to begin with and taste. Add another if it needs it.

Marinate the chicken. Massage the jerk into the meat and allow to marinate in the fridge for 2 – 4 hours. NB: Some recipes say to slash the meat to allow the marinade to get into the chicken, which might also help cook the inside of the chicken. I don’t do this preferring to try to keep as many of the juices inside the meat as possible.

Make the rice and peas. Chop the onion finely and put into a thick-bottomed pan with lid. Fry gently on a medium heat for 10 minutes. Add the rice and continue to fry for 5 minutes. Meanwhile, put the coconut milk and an additional 275ml water into a pan and bring to a simmer. When the rice has been frying for 5 minutes add the liquid and bring this to the boil quickly – then immediately set at the lowest heat and secure the lid tightly. Cook for 20 minutes. While the rice is cooking, heat the kidney beans in their water until very hot. When the rice has been cooking for 20 minutes add the beans and stir the rice. Turn off the heat and let the rice sit for 15 minutes. Stir just before serving.

Cook the chicken. If using a barbecue, cook the chicken gently to start. This is best done using indirect heat with a covered barbecue – or with the grill set on a high setting above the coals on an uncovered barbecue. The challenge with boned chicken thighs is getting the inside cooked before the outside gets too charred. This actually requires a bit of skill and patience. Let the chicken cook for about 25 minutes turning often and basting with marinade. then grill on a higher heat to chargrill the chicken for about 5 – 10 minutes, being careful not to cause too many flames with dripping fat. Test a piece of chicken by probing with a knife to see if it is still pink inside or runs with pink juices. Continue cooking until thoroughly cooked. If using an oven, place in an ovenproof dish and cook in a medium oven (189C, Gas 4) for about 35-45 minutes or until the chicken is thoroughly cooked.

Serve. Serve the chicken with the rice and peas, green salad and jerk sauce if desired.