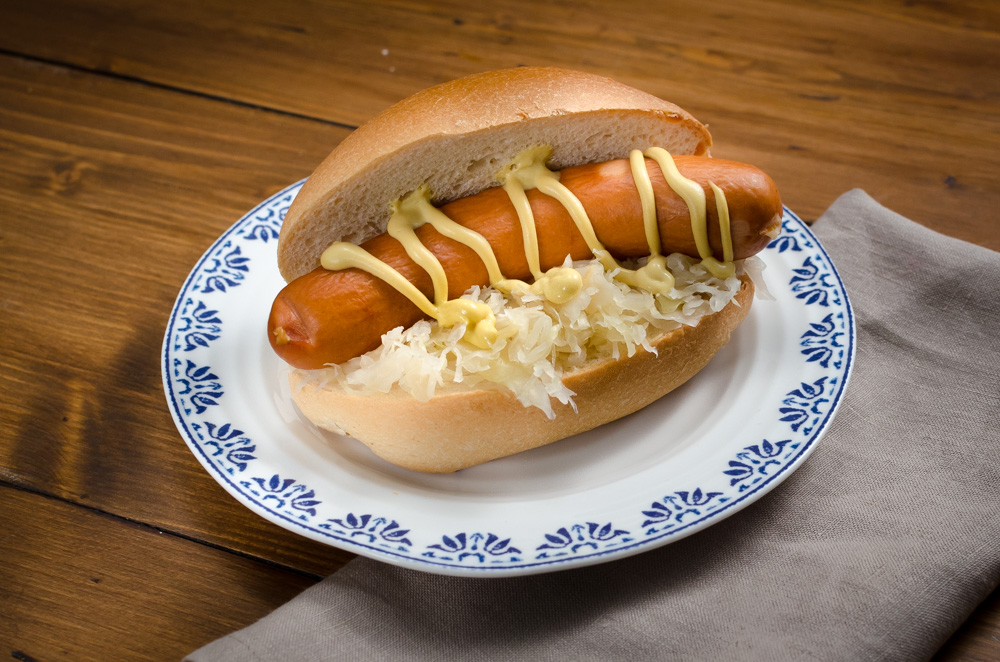 Sauerkraut from a jar

You know how to make a hot dog – right? But what about a German hot dog? Well, what’s a hot dog if not the original German frankfurter in a roll, imported to America.

However, the American hot dog has somewhat evolved, what I’m trying to do here is get back to a more authentic version – something that might be served in Germany or a German deli. To do this, it’s necessary to find the right ingredients. I think a genuine German bockwurst is the right sausage for this version of a hot dog. A sausage of this type from a deli meat counter is a much better product than from a jar, tin, or plastic package from the supermarket. They have a proper ‘snap’ to the casing and the meat is mild and light in salt – which is kinder on the system. Your ‘dog’ can be frankfurters but the German versions are long and thin – so you will need a couple (it’s the same meat). You can also use a bratwurst – but I think these are better fried in a pan or under a grill or over a barbecue and they are a slightly different proposition as the meat is more flavoured, spicy and textural. If using bockwurst, it just needs to be simmered in water for 10 minutes – don’t boil.

Next the roll. I hitch-hiked through Europe with my sister (when we were far to young to know better). We travelled through Germany staying in Heidleburg for a few days. Whilst there we survived on German ‘hot dogs’, mainly because it was all we could ask for in German: ‘Bockwurst mit brot, bitte’. Strictly speaking that is a sausage in ‘bread’ – so it could mean any kind of bread – but what came back was usually a roll or ‘brötchen’. There are regional varieties, but the smooth crusty white wheat roll with a light fluffy inside is the best. Aldi and Lidl bake these in store.

Then the sauerkraut – it’s optional – by why not try it: millions of Germans, Eastern Europeans and North Americans can’t be wrong… We lived in Germany when I was very young. My mother clearly took to the German cuisine and would serve the family piles of sauerkraut as we were growing up.

Top it off mustard, no ketchup necessary (or advisable) – just mustard. But make sure it is the mild German type. This is smooth and gentle, like mustard-flavoured mayonnaise.