Trenette with Skate, Capers and Tomato

Trenette is a pasta associated with Liguria in Italy – it is like a wider thinner version of linguini. 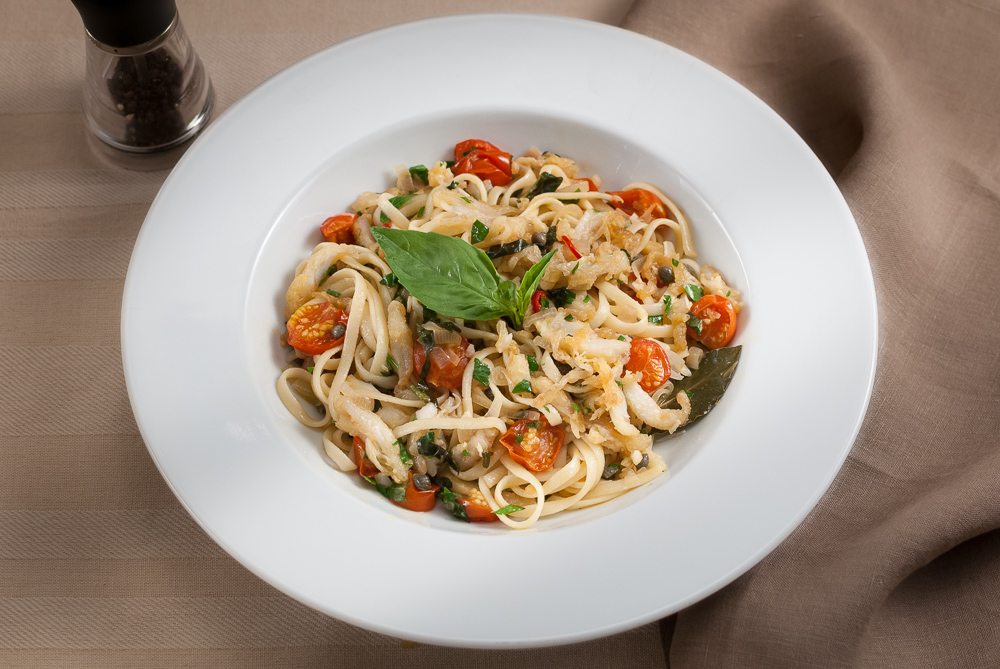 In the past I would eat out quite regularly. I could easily justify the indulgence by saying that, just like professional chefs researching the competition, I was comparing notes, seeking inspiration for recipes and acquiring tips to improve my cooking.

Holidays also provide plenty of opportunities for eating out. Generally, there is enough variety in the inexpensive local cuisine to provide the culinary satisfaction a cook might crave, but occasionally, it is worth making a special trip to a well-known restaurant to be reminded of more exacting standards. On one holiday in Lyme Regis, many years ago, we did just this. The restaurant was the Riverside Restaurant in West Bay, Dorset. Jonathan Meades gave it a good review and as Rick Stein’s place was booked-up for years, this seemed a good option.

The two particular fish dishes I wanted to try were baccalau and skate au beurre noir. Baccalau is a salt cod pate and specialty of the Iberian peninsula, but there are versions throughout the the Mediterranean. As a curious home cook, I have dutifully explored the world of salted cod. However, I have always been disappointed with my attempts at making baccalau. After spending several days sourcing, soaking and finally pounding the fish, I was expecting something more in return for my efforts. The outcome was a bowl of white mush, which after the palate had filtered out the salt, tasted rather like fishy cardboard. Surely, something was going very wrong. The only answer was to taste an authentic version so that I could determine the the right corrective action. Similarly, skate in black butter sauce provides further discouraging tales. Did my buerre noir taste nutty? No, it tasted burnt. What I needed was a visit to a proper fish restaurant to put these trials into perspective.

So we booked to eat at the Riverside Restaurant. It was the worse meal I have ever eaten.  My selections from the menu were known in advance: salt cod and skate. Together these dishes nearly killed me with salt poisoning. The next day I woke with my mouth encrusted with white salt crystals. I felt as though my innards themselves, were being slowly cured into baccalau. Clearly, the salt had not been soaked out of the restaurant’s salt cod. Anticipating that the meal would feature as the pinnacle of our holiday, I stubbornly refused to accept that there was a problem and slowly ate my way to the bottom of the bowl. The skate was very good I’m sure, but the capers and butter sauce must have had an accident with the salt cellar. Nevertheless, I also foolishly finished the fish – and its sauce – aided by this time by several jugs of water… My perseverance was naive, based on what I now know to be a misguided assumption that all chefs are good cooks.

It was a salutary experience. I’ve learned to trust my own instincts and rely on my own palate to decide when something is good or not. It has not, however, stopped me ordering baccalau – my quest for reconciling the perfect salt cod remains unfinished business. Skate, on the other hand, I am happy to cook and enjoy at home. I do not bother with browned butter, but prefer lighter sauces – such as beurre blanc! I also like to try out my own ideas, chopping the wings into chunks and then  poaching or frying or filleting as in the recipe below. I have also learned that eating out is not a panacea for culinary enlightenment. You can have good meals and bad meals. On balance, I probably eat better at home.