‘…they’re sweet, tasty and rather cute muffins made with love. Just the kind of thing I would have helped Mum and Dad make as a munchkin around this time of year – running  around with pumpkin pulp and seeds stuck between my fingers!’ 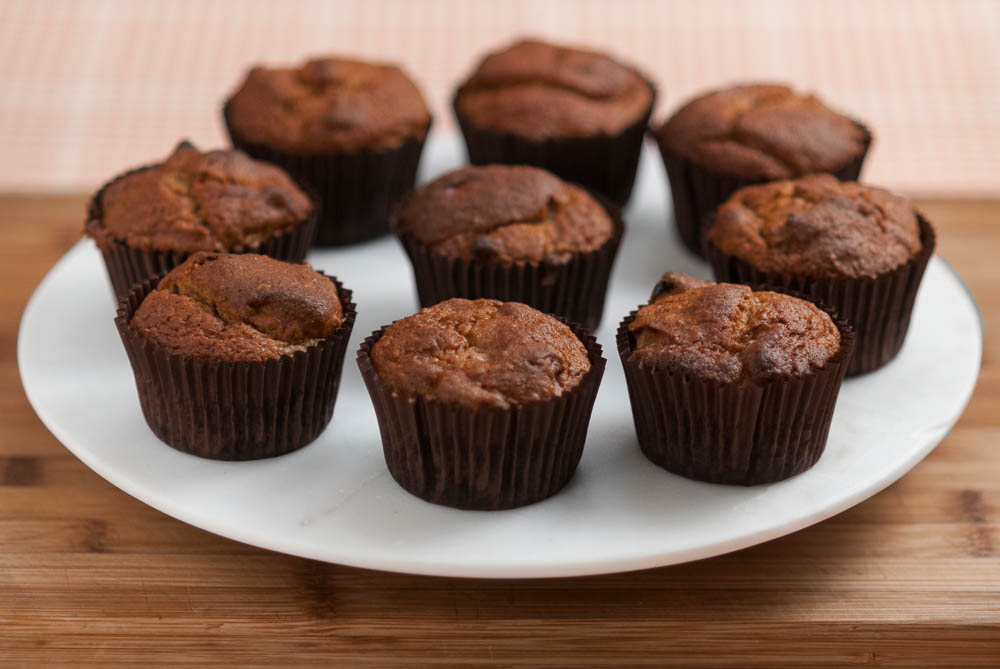 Alternatives are butternut, hubbard or crown prince squash or kaboocha pumpkin. Just over 3kg of deseeded pumpkin will produce about 3 cups of well-drained cooked puree.

This recipe is adapted from an American cookbook, How Cooking Works – The Indispensable Kitchen handbook (1981). It was proudly given to me by my dad.

As an electronics engineer, my dad would have responded to the logic of a kitchen ‘handbook’. Just like a car ‘handbook’, he would assume the book included exploded diagrams, matrices and tables, as well as explanations about the physics and chemistry behind the formulas we know as recipes. In fact, the authors must have been over- awed by their self-imposed educational task; disappointingly the book resorts to the usual collection of recipes (though all very good). Prue Leith wrote a handbook: The Cook’s Handbook (1981). It does include tables – but unfortunately the rigidity of tabular content detracts from its practical usefulness. Surprisingly, the handbook approach does not seem to have taken hold in kitchen and cooking literature.

Until relatively recently, it would even be difficult to find a book which discusses the science of cooking in any format. However, two notable books broke ranks in the early 2000’s. Peter Barham’s, The Science of Cooking (2000) and Harold McGee’s, On Food and Cooking, An Encyclopaedia of Food Science, History and Culture (2004). These detailed and academic books became indispensable for many modern chefs. The knowledge they contain has been converted into the guiding principles of many fine dining institutions – The Fat Duck, Noma, El Bulli et al.

I’ve always been practically minded and enjoy applying new scientific knowledge to my cooking – it’s one of the reasons I love to cook. But Mrs WDC (who often quotes my well-worn mantra: ‘cooking is chemistry’), would also say that I had good ‘hands’ for cooking. She must feel that cooking has as much to do with human touch as it does with chemistry. More recently my family have said that I ‘cook with love’. Although flattered, I was sceptical of such a non-rational measurements of quality. Clearly, among the dinner guests, there is less interest in the mechanical processes and chemical formula that transform ingredients into a meal than whether those ingredients are cooked with thoughtfulness and consideration, that they sustain and nourish, support emotional bonds and suit the mood and appetite of the gathering.

It seems that a recipe cannot be reduced to an equation: there must be an allowance for intuition, creativity, traditions and personal influence. I’m sure even my dad would have agreed that there is more to any meal than simply learning ‘how cooking works’.

Mrs WDC, who has a highly ‘refined’ sweet tooth, said in a sombre tone, ‘These are very good’, so I take that as a thumbs up! If you use canned pumpkin the recipe is actually very easy. I made these with the pulp from my Halloween pumpkin.

Cut the pumpkin into large slices and scoop off the seeds with a large spoon (for patient cooks, the seeds can be cleaned and roasted and eaten as a snack). Put the pumpkin slices into a large roasting tin and cover tightly with foil. Cook in the oven at 160C, Gas 3 for about 45 minutes to 1 hour or more. The exact time will depend on the type of pumpkin. Just keep an eye on it and test frequently. Remove from the oven when very tender. Cool and then peel the skin off the flesh. Put all the pumpkin in a bowl and blend with a hand blender – or blitz using a processor or blender. Put the pulp into a fine sieve and drain – use a spoon to help force the liquid out.

It becomes clear from this process that a pumpkin is mainly liquid. In the past I have put the pulp in the freezer (as Gordon Ramsey recommends). it helps to separate the liquid during thawing. As an experiment, I reduced all my gathered liquid (from the oven pan and drained pulp) and reduced down to thin syrup – it tastes a little astringent and bitter but very much of pumpkin. I decided to keep this a  fruity ‘demi glace’ which I would re-introduce into the recipe later.

As you can tell preparing something as basic as a pumpkin pulp becomes quite involved… Use the time you have to do this in a way that is convenient. Many recipes say to peel, deseed, chop and boil the pumpkin until tender. The quickest way is to use tinned pumpkin!

Preheat the oven to 170C, Gas 3.5. Prepare a muffin tray with muffin cases.

Blend together the flour, baking powder, soda, salt, cinnamon, cloves, allspice, ginger and sugar. (Retain a little of the flour to flour the nuts and dates so they don’t sink to the bottom of the muffins.)

In a large bowl, beat the eggs until foamy. Add the pumpkin syrup or bourbon (if using), dates, pumpkin, oil and bran cereal and mix well.

Fold the dry ingredients into the wet and mix only until combined.

Using a spoon fill each muffin case 3/4 full. Bake for 45 minutes to 1 hour – check frequently after about 40 minutes.