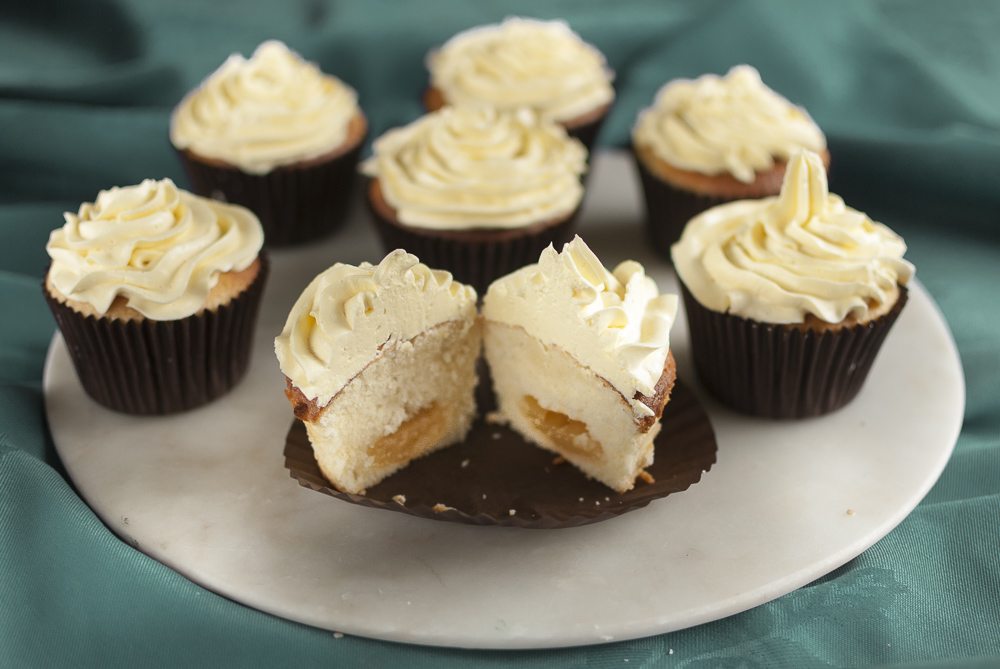 zest of one lemon and juice of two lemons

For the buttercream frosting

These cupcakes were inspired by the ‘Estimation Nation’ baking chocolate cupcake competition we won. I was intrigued by the idea of putting raspberry jam on top of the batter before cooking. I thought the idea would work a treat with a lemon flavoured cupcake with the dollop on jam on top switched to lemon curd. The idea coincided with our review of the new Liberty London range of products in their new Mini British Food Hall.

I’ve never made buttercream frosting. But I couldn’t resist the challenge to try to make the fancy swirling frosting tops you see on commercial cupcakes. It makes sense that these should be fancy and highly attractive, as it is all you can see that is edible with a cupcake. Indeed, most sellers of these confections, try to convey the entire idea of the the cupcake flavour in the construction, additional elements and embellishments of the icing. My piping nozzle is not quite right, but I still got a pretty good result. I would love to see how the pro’s do it – I’m sure the cakes are put on a turntable so the piper can twist the piping bag. Like everything in the pastry department (irrespective of specialist kit) practice make perfect.

Italian meringue buttercream is perfect for cupcakes, they will keep a week at room temperature and as described above this type of frosting has the ideal texture for complex piping. However, it takes a little more effort. An easier frosting – and one that goes well with the lemon cupcake here – is cream cheese frosting. I provide a recipe below as an alternative (as well as an alternative Italian meringue cream cheese buttercream version).

Finally, the cupcake is made with melted butter and oil. The butter adds flavour, whilst the oil provides a light and delicate crumb. The oil also helps the cake keep longer.

Heat the butter. Use a low heat and take off the heat as soon as it has melted. Add the oil and set aside.

Sieve the flour. Sieve twice with the sugar and the baking powder and soda. Set aside in a small bowl.

Separate the eggs. Put the yolks and whites in separate mixing bowls.

Whisk the egg whites. Whisk with the pinch of salt to the stiff peak stage.

Mix the eggs, lemon zest and oil. Use the electric beater.

Combine the flour and egg mix. Slowly add the flour to the egg mix and beat in using a whisk. If it becomes too stiff add a tablespoon of water at a time until the mix becomes smooth.

Add the egg white. Add on quarter of the egg white and blend into the mix to loosen. Then fold in the remaining egg whites a little at a time.

Bake the cupcakes. Line a muffin tray with 12 muffin cases. Fill each case nearly to the top with batter. Add a spoonful of lemon curd to the top of each filled case and bake in the oven for 15mins – 20mins. Cool in the tray for 10 minutes and then cool on wire rack.

Make the buttercream: Add the water, sugar and syrup to a pan and heat gently to dissolve. When dissolved, boil the sugar until it reaches soft ball stage, 121C on a sugar thermometer – about 5 minutes. When the sugar is nearly ready start beating the egg whites to the soft peak stage. When the sugar at the correct temperature slowly drizzle over the egg whites whilst still beating with the electric mixer. Continue whisking until the mixture has cooled, about 5 more minutes. Add the butter a little at a time, whisking all the time. When the butter is well beaten into the mix beat in the vanilla and lemon curd. Fill a piping bag with the buttercream and frost the cupcakes. Decorate (and flavour) with lemon zest if you like.

Alternative cream cheese frosting version 1: Replace 100g of the butter in the above recipe with 100g good quality full fat cream cheese. Add after the butter has been incorporated. Pipe onto the cupcakes.