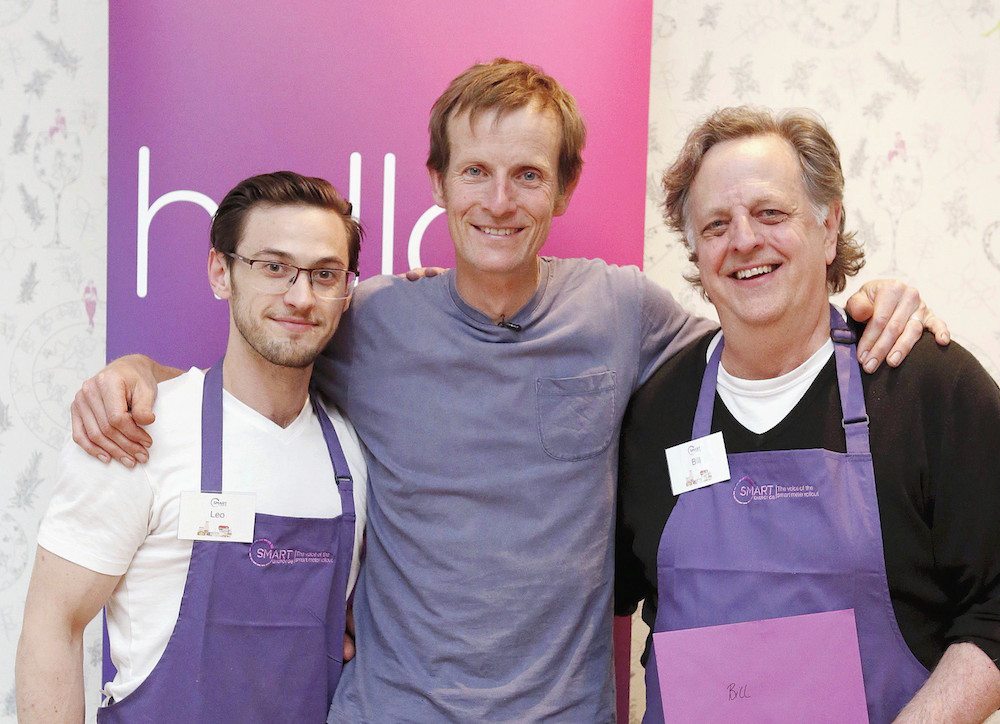 Arriving at the event

Up to the kitchens!

Dad wants to know where the scales are.

The event was all part of Smart Energy GB’s Estimation Nation Campaign for the Smart Meter roll-out. The campaign is built around the idea that estimating in other critical aspects of our life is not very effective – yet we pay for our energy use based on estimates. The baking challenge continues this theme: we were given all the ingredients for our recipes but not the measurements or any measuring equipment… everything was to be based on our best estimates, including oven temperatures and baking time.

The nerves build as we prepare to start. First Ian gave us a few reassuring introductory comments on each bake. Then the Open Kitchen staff gave us instructions and briefings about using the kitchens. The camera crew attached Go-Pro cameras to our heads (under a paper chef’s hat). And finally we were shown our ingredients…

And yes, estimating is as daft and unreliable as the campaign implies… Still nobody took it too seriously (besides we all had a very good excuse if things went wrong).

How WDC made their cupcakes

The cupcakes were a devilishly brilliant idea for an estimation challenge. WDC is not expert at baking – however, most cooks know that a Victoria sponge uses equal amounts of eggs, sugar, flour, and butter. I suggested that Leo estimates the amounts using the eggs in a bowl in one hand and balancing the other main ingredients in a bowl in the other. Incredibly, Leo turns out to have arms calibrated to judge weight with astonishing accuracy. But the spanner in the works (thanks Ian!) was using oil. Ian described happily that this makes the bake lighter and keeps it fresh longer. Unfortunately, we have no idea how much to use. Leo gave me his best shot at two eggs-worth of oil and we crossed our fingers…

Meanwhile, the critical ingredient in both challenges was the leavening agents. I relied on a standard self-raising flour conversion tip of about 2 teaspoons baking powder per 150g plain flour. A large egg weighs roughly 70g so I added just under two teaspoons of baking powder and soda.

I use taste to guide savoury cooking – but this is rather difficult with raw batter. It’s easier with the frosting. Leo – a chocolate fanatic – was a big help here, when he said it tasted great, I knew were on the right track.

The really clever part in the recipe is that you put a dollop of jam on top of the batter in the cupcake cases and then it sinks to the bottom during baking. When we ate our cooked cupcakes I thought they were very good. I put the credit to this on Ian’s recipe rather than our bake – but, clearly in the judges estimation we ‘estimated’ well!

Our scones tasted as good as they looked – but they had a very slight spring to them. I’ve never made a scone and thinking they were a bit like soda bread I added lots of leavening agent. Another example of less being more… Oh well, it wouldn’t have been right to win both challenges!

You have FIVE minutes left!

Dad and I post bake off for #EstimationNation Smart Energy GB. What a fast past afternoon that was! Baking challenges, gopros, chin wagging and a cheeky glass of vino to relax! Such fun! #foodiechats #baking #cupcake

What are smart meters, why do we need them and will they help our baking?

At last we could take off our Go-Pros – and hats. And hats off too for Smart Energy GB. The event was professional, well organised and educational. Apart from learning a bit more about cooking (do we ever stop?) we were given plenty of opportunities to learn about smart meters.

I admit I may have been skeptical about the balance of benefits between government, energy companies and consumers – but through discussions, I concluded that the meters would be a win-win for all. The consumer will use less energy, the nation therefore will use less energy and the energy companies can produce more efficient energy. There are other clear benefits for the consumer such as being able to compare tariffs more accurately and of course, always paying for the exact amount of energy used.

Will smart meters help WDC’s baking? Well, after winning our bake, I’m tempted to say that WDC can manage quite well without scales and measuring devices – but not a jot of it, when it comes to baking. I’ll always depend on exact amount of cups, ounces, grams and milliliters. The smart meters may not be able to measure flour, but they should tell us exactly how much energy goes into baking a cake!

For more information about smart meters go to the Smart Energy GB website.