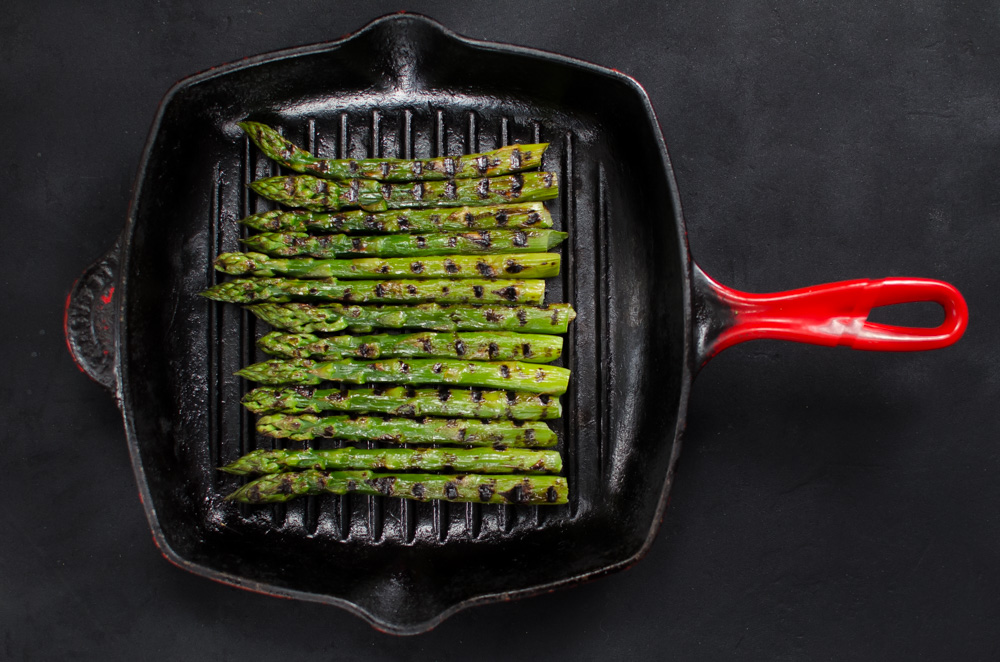 About 200g asparagus per person

Many years ago, when my father was still alive, I used to travel to Southern California to see my family living in the US. I would stay with my younger sister, who was living in in Long Beach at the time; my dad, brother and cousin lived in nearby towns, so it was a convenient base.

Although I made these trips long before I began blogging about food, I had acquired a reputation as a good cook. I am not sure how this was allowed to develop because my brother and two sisters were all excellent cooks. My brother worked in the food and beverages industry and regularly cooked for events and large gatherings. His expertise was the barbecue. He was famous for procuring enormous slabs of meat, which he marinated days before cooking. He either slow-cooked his meat or quickly charbroiled choice cuts producing ‘blackened’ recipes – which were trending at the time. My younger sister was more refined and typified a style of cooking using the abundant fresh quality of food available in California: simple, clean, often raw. Her mantra was no ‘shiny’ food. Ingredients were therefore rarely fried and usually remained separate, unadorned with sauce – and never drizzled with olive oil. My style of cooking stems from a life-long quest to improve my skills through exploring the repertoire of the world’s best chefs – and drizzling olive oil over everything. Although each of us appreciated good food and eating well, we did not necessarily see eye-to-eye on a methodology to achieve this goal.

A few days after I arrived my sister said she was thinking of throwing a soirée for some of her friends, including an invite for a male friend who was trying to organise a blind date for her and a nice guy he met down the gym. My sister had a day job, so I thought it would be a good idea if I offered to organise and prepare the food for her dinner party during the day. I could show off my culinary skills and she could concentrate on giving a good impression to her mystery guest.

The next day I drove to Bristol Farms, a gourmet grocer. Shopping in Bristol Farms was a heady experience, rather like being in a dreamy mash-up of Harrods Food Hall and Borough Market. I had a schedule and made my selections: bundles of fresh Californian asparagus, shrimps from the Pacific, Louisiana and Singapore, lamb racks, fresh herbs, salad leaves, vanilla beans, cream and summer berries – oh, and a bag of ground coffee to use in my sister’s new, all bells-and-whistles espresso coffee machine.

As I drove back to my sister’s home, I began to plan my recipes for the evening’s menu. First, steamed asparagus and Hollandaise sauce, then shrimp three ways (tempura with ponzu dipping sauce/gambas al ajillo/prawn sashimi), lamb racks with a parsley and crumb crust and salad, and finally a vanilla panna cotta with berries.

As I was unloading the shopping, I paused to make coffee. I switched the coffee machine on, filled up the metal filter cup and firmly attached it to the machine. I then pressed the button and waited for the coffee to drip through.

What happened next would affect the day’s proceedings, my menu and possibly my long-term relationship with my sister. I had used intuition to operate the machine, but was unfamiliar with these complex coffee makers and did not realise the pressurised tank that pushes air and steam out of the milk-frothing spout also pushed the boiling water through the coffee filter. The correct modus operandi is to release the steam pressure through the milk steamer before opening the coffee filter cup. Therefore, when I tried to undo the filter cup, the steam tank, straining at holding hundreds of pounds per square inch of pressure, violently and instantaneously released a blast of pressurised hot air into the coffee filter cup creating an omnidirectional explosion of powdered coffee grounds. This could have been extremely dangerous; perhaps I was lucky that this machine – despite its bells-and-whistles – was of domestic grade rather than industrial. I was in a state of shock; I stood motionless, coffee filter cup in hand, staring at the machine. It was several minutes before I could finally utter the word: ‘Oops’.

Slowly I took stock of the situation. I was okay, but had been blasted with coffee: the sticky grounds went everywhere; they formed a textured brown film over my face, my clothes and every kitchen surface, penetrating deep into every nook and cranny. My sister laughs about it now, but I bet she would have been muttering to herself like a cranky David Sedaris: ‘Goddammit Billy, I’ve been scraping coffee grounds out of my kitchen mouldings for the last three years!’

I spent the rest of the day attempting to clean the kitchen and myself. So much for making Hollandaise sauce, tempura batter, or panna cottas. My sister understood, but was also concerned about preparations and her guests’ imminent arrival.

I had to re-think my dinner.  So adopting my brother’s bravura and my sister’s individual cooking approach, I tried to rescue the evening. I cooked grilled asparagus, prawn kebabs and lamb chops, added salad, then served bowls of berries and ice cream. Despite the behind-the-scenes traumas, the evening was a great success, everybody thought the meal was excellent and believed that I was indeed a good cook – even my sister and her mystery guest bonded and are now happily married.

While the moral of the story could be: make sure you always read the instructions FIRST, it must surely be: every cloud (of coffee grounds) really does have a silver lining.

WDC was recently invited to contribute to the Garsons Farm Spring Food Fair. WDC were promoting an asparagus frittata recipe we developed for Garsons Farm. The recipe made use of Garsons seasonal asparagus and other produce. I was cutting and giving away samples of the frittata, however, after each frittata was consumed, I griddled a couple of bundles of asparagus and gave this away in small portions with lemon and Parmesan. I was surprised by the interest in the griddling and the comments and questions I received about the asparagus. People especially seemed to like the combination of asparagus, lemon and Parmesan.

Here is my method for grilling or griddling asparagus.