Tuna and sweetcorn. A match made in heaven, or a culinary mismatch? 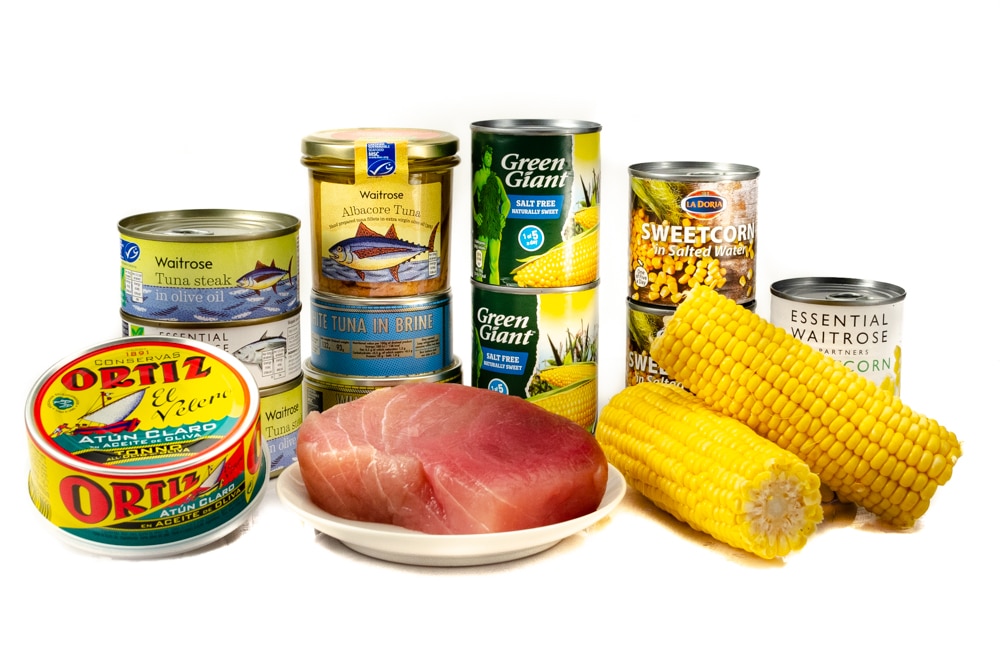 There are few foods more distinctive or pleasurable than either tuna or sweetcorn. Each is a wonder of its kind: tuna is king of the sea and corn queen of the land. However, are these impressive lineages a good reason to marry the two in a salad, sandwich, or casserole?

Aficionados may scoff at the practice of combining tuna and sweetcorn, dismissing the blended flavour as inferior to its individual parts. Others may argue that the pairing is not so much an acquired taste, as one that should not be allowed; a corruption of food laws as flagrant as pineapple and ham on pizza. Some will protest that the idea is simply an adolescent culinary folly; as gauche as putting spaghetti rings on toast, Nutella on crepes or ketchup on anything.

I can understand some of our detractor’s views, but since we are nowhere near the culinary abominations of combining sweet jelly (Jell-O) with salads, fusing chocolate with dill pickle or blending peanut butter with beef in a burger; I believe we should give the tuna and sweetcorn combination a chance.

To be clear, what we are specifically concerned about here is the melding of tuna and sweetcorn. For instance, a grilled tuna steak along side fresh corn on the cob is deemed an acceptable juxtaposition, whereas mixing tins of tuna and sweetcorn will be like Marmite: some people will love the melange, others will not.

As an American, I know that most Americans do not tend to mix tuna with sweetcorn (or ‘corn’ as it known in America). However, they will contrive amalgams of tuna for filling tuna or ‘tuna fish’ sandwiches, making tuna casseroles, or constructing firmer concoctions, such as tuna loaf (as in meat loaf), tuna ‘Rockefellers’, and tuna bakes. They also fashion floppy mixtures of corn for turning into corn chowder, creamed corn, corn pies, or they fabricate more solid structures such as corn fritters or griddled corn ‘oysters’. Corn even finds its way into corn bread and pancakes. Americans are not bashful about throwing a can of tuna – or corn – in an oven dish, adding any number of other ingredients before smothering the lot with eggs and cream, topping with crackers or breadcrumbs and baking until nicely browned – it’s just that they won’t put the tuna in with the corn (or vice versa).

In the UK it’s different, the British make many of the dishes Americans do, but are also quite happy – on the whole – to mix the tuna in with sweetcorn recipes (or vice versa).

Clearly, there exists a cultural division over the wisdom of combining tuna and sweetcorn. However, where there is no disputing of opinion is in the shared understanding of the essential virtue and value of tinning either tuna or sweetcorn.

People like this particular tinned food for all kinds of reasons. A good place to start is availability. Many local stores do not stock fresh tuna. However, all grocery stores stock tinned tuna (and corn). Both types of tin are not only widely available, they’re omnipresent: from the Amazon to Siberia, or from Timbuktu to Alice Springs. I suspect tins of tuna and sweetcorn are vital to survival supplies in both north and south polar research stations. Tuna and sweetcorn is even eaten in space, (though probably removed from the tins on Earth and processed in a plastic pouch!)

The key to the success of these commercial products is each ingredients’ incredible ability to withstand the rigors of processing. In the case of tuna, the result is miraculous. It somehow metamorphoses into something better than the original: tinned tuna – delicious and versatile. In the case of corn, processing (or freezing) produces a product almost indistinguishable from fresh. Both tinned versions seem to defy physics during processing, resulting in a virtually imperishable canned food source.

Perhaps the most important reason for these tins’ popular demand is their low cost. When considering the quality of raw materials, the amount of fishing and farming, along with the complexities of manufacturing and scale of worldwide distribution, it is hard to believe the tins can be so affordable.

So, tinned tuna and sweetcorn is widely available, lasts forever and is cheap. But probably the main reason these foods are popular is their convenient source of dietary sustenance. Both products are quick, and easy to convert into appetising and nutritious snacks or meals.

It seems the case for the combination is made, so why not make good use of it: mix or don’t mix the tuna and sweetcorn; use lots, or just a little mayo; eat for lunch, take on a picnic, or make into supper. Combine with sauces, pour over toast, ladle with pasta, noodles, or rice; make into a casseroles, bake, stir-fry, make a gratin or heap over baked potatoes.

And therein lies the latest WDC project: Tuna and Sweetcorn 30 Ways. The first challenge was tuna and sweetcorn pizza in a pan. This was followed by adapting the ingredients into quenelles, terrines, rillettes, pates, canapes, melts, and risottos. The list could be endless…

The task is to demonstrate tasty tuna and sweetcorn combinations across a range of cooking styles and techniques.The series will use fresh and tinned tuna and sweetcorn, as in most cases, the two are interchangeable. It will feature many standard recipes, but also push the boundaries of the partnership to develop new recipe ideas.

For many tuna and sweetcorn will always be a match made in heaven, but for those who believe the union is a mismatch, the hope is that the series will prove that tuna and sweetcorn are in fact thriving in an excellent culinary friendship.