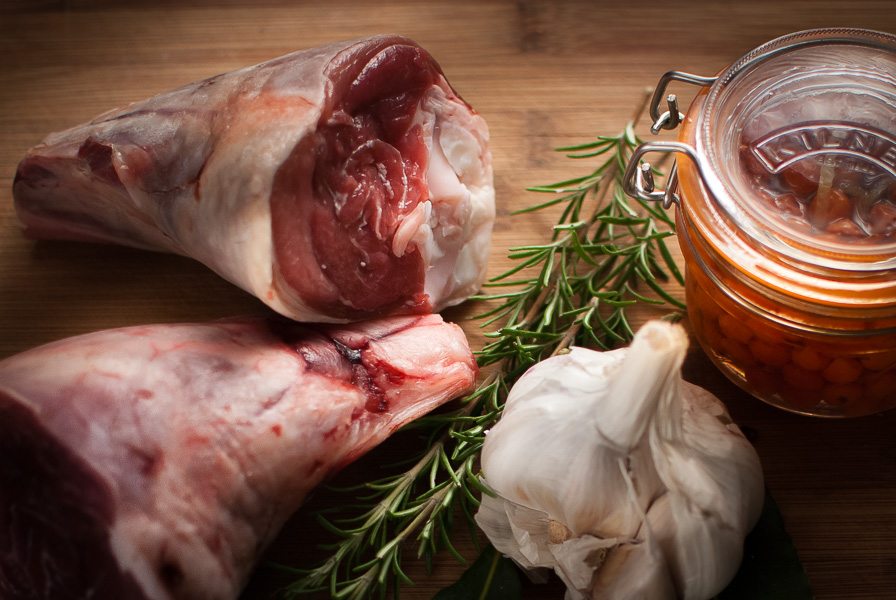 A lamb has shanks – but what do pork and beef have?

We all know about lamb shanks – they’ve been mandatory dishes on gastropub menus for years. The lamb ‘shank’ is the lower part in the rear leg. The same joint in pork is the ‘hock’ and in beef, the ‘leg’. The equivalent joint on the front legs are ‘fore shank’ for lamb, ‘knuckle’ for pork and ‘shin’ for beef.

The wonder of lamb shanks is already understood by home cooks who roast their lamb joints with the shanks still attached. When the joint comes out of the oven – the part most likely to be eaten as a ‘cooks treat’ is the crispy, yet succulent and tender meat from the shanks. If these joints are so popular in lamb, why don’t we see more of the same joints in pork and beef?  The reason is simple – size; a lamb shank will sit happily on a large dollop of mash and makes a very satisfying meal for one, but a knuckle or hock will appear as a great mountain of meat – not well suited to fine dining rooms. A shin or leg of beef is even bigger.

So what happens to our shank-like pork and beef joints? Knuckles and hocks might end up in sausages, whereas shin and leg of beef might be ‘boned-out’ and sold as stewing steak. However, along with other cheaper butcher’s cuts (such as lamb neck, pork cheek and beef rib), leg of beef is becoming more popular and beginning to make appearances in butcher’s windows. Whole knuckles and hocks can also be found at select butchers. Both these joints are popular in German cuisine, where they are slow roasted – as in my shweinshaxe recipe. You may be lucky enough to find whole cured or smoked knuckles and hocks. These are good value and great to eat.

All these joints share the same basic characteristic: they’re tough as old boots! And as all butchers and chefs know; the coarse fibres, tendons and sinews that make a joint tough, will also breakdown in in a slow braise to make succulent and flavoursome meat. The science behind this transformation is based on the collagen found in connective tissues. When collagen is cooked on a low or moderate heat for several hours, it denatures into a soft and unctuous gelatin. Some of the surrounding meat will become soft and stringy and cling on to the gelatin and juices. When cooks and chefs demonstrate this style of cooking they usually eulogize over the tenderness of the meat, including the familiar adage: ‘it’s so tender you can cut it with a spoon’. It might also be tender enough to ‘shred it with a fork’ – the resulting texture will be identical to ‘pulled-pork’.

So the moral of the story is, take the trouble to seek out and buy these joints. Cook them slow and low – you will be rewarded with tender and delicious meat…