And what, exactly, are you supposed to do with a thousand-year-old egg? 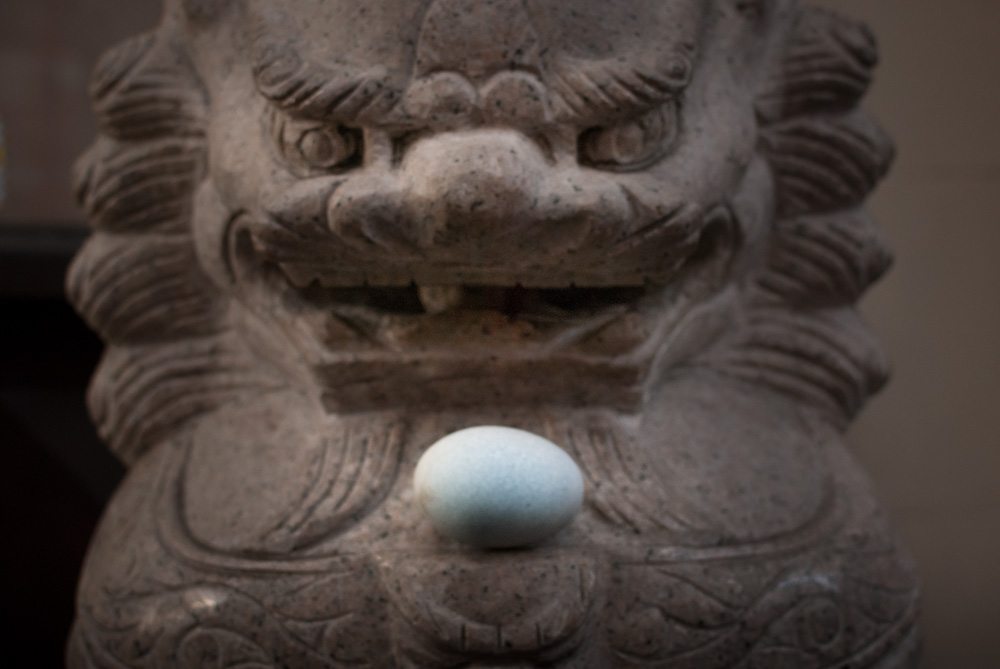 This was one of many questions I had on my mind during my latest foray into London for January’s Time Out article. I had other questions: Why does it always rain when I do these articles? Can I contain the odour of a durian inside my rucksack? And will Ching-He Huang to help me converse with the locals?

This month’s article was particularly challenging. Deciding on food in Chinatown for the 2017 New Year was a no-brainer, but Time Out would be saturated with Chinese New Year articles. Our editor said go – but make it niche!

I set off looking for ‘niche’, in a ‘weird and gross’ way – Chinatown has plenty: there’s sour chicken claws, fresh chicken gizzards, pig intestine, pig’s ears, duck’s tongues, tins of abalone, pickled sea cucumber – the list goes on and on…

I also explored for other niche foods and found many weird and wonderful things. There were thousand-year-old eggs, handmade dumplings, whiffy durian and giant jackfruit. I watched Hong Kong egglets being made, I found boxes of fresh water chestnuts, watched live eels in tanks, counted endless varieties of fish balls and marveled at the lotus seeds, ginko nuts and tapioca pearls. And then there was the especially wonderful crispy duck – otherwise known as roast duck or Peking duck.

Recce completed, I headed home – but before leaving, I stopped at a restaurant to order some of Chinatown’s famous duck as a takeaway. The thought occurred that I could also do some first-hand research into the ‘gross’ side of ‘niche’ and order a few of the more anatomical offerings under the racks.

‘Can I have half a duck,’ I started, waving my hand down in a slicing motion to indicate a duck cut in half, ‘also half a cuttlefish and half a roast pork.’ Still slicing my hand up and down.

‘Roast pork is not included in mix,’ said the waiter.

‘Roast pork is not included in mix,’ snapped the waiter again. I stepped back, then realised a BBQ ‘mix’ must be a specific menu item that excludes pork. I tried again.

‘Yes, but can I have a little of everything – an assortment,’ I said, pointing in turn at all the meats on the window racks.

‘Okay,’ said the waiter. I was relieved we seemed to be on the same wavelength.

‘And half a tongue,’ I continued.

‘Tongue?’ asked the waiter, sticking out a pointy tongue, as if to demonstrate the meaning of tongue.

‘Yes, tongue,’ I said, and then found myself sticking out my tongue back to the waiter as if to confirm.

‘We only have pig’s tongue,’ said the waiter, sticking out his tongue again.

‘That’s fine,’ I said, but I only wanted half tongue and stuck out my tongue and made another slicing motion with my hand.

This was absurd! What was I doing sticking out tongues with this waiter? I composed myself and completed my order.

‘I would also like some barbecued pig’s intestine,’ I said. This time the request registered without the need to pull up our shirts.

Despite the embarrassing charade, the order was perfect. Everything was delicious. Even the intestine was good. However, If I’m honest, the tubular shape was not very appealing and the taste was rather more exotic than I would have preferred. I realised that although I can eat intestine, I don’t need to.

I decided ‘niche’ as in ‘gross’ was not right for the article. I have too much respect for the normal Chinese culinary arts to focus on any penchant for dodgy edibles.

In the end I settled on a selection of the ‘weird and wonderful’ – things that were quirky, but also showed my fondness for the food of China. I chose the delightful little cream-filled waffle fish sold as Taiyaki, the symbolic ‘New Year’ glutinous rice cakes also shaped as a fish, the decidedly oddball bubble teas, handmade lucky jiaozi-style dumplings, the smelly but delicious durian and of course the wonderful roast duck.

And then there was that thousand-year-old egg… The instructions say you eat these eggs as they are or with congee. We ate them with pickled ginger, soy, sesame seed and salad. They were surprisingly good.