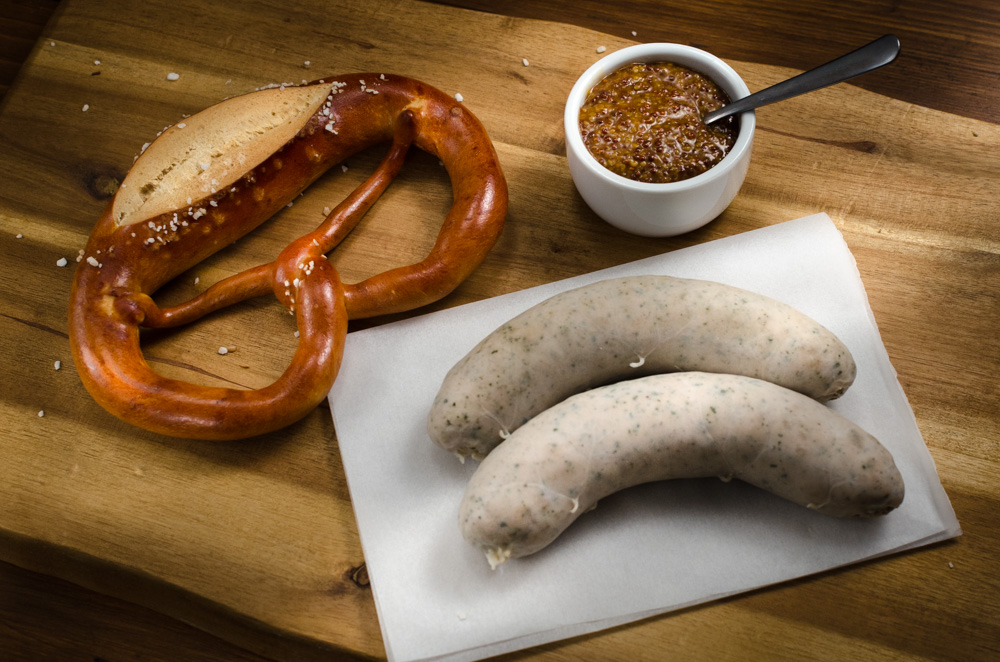 We have a German friend who we assume likes all so-called ‘traditional’ German faire. But most of what we assume equates to traditional German food is in fact Bavarian specialties. Perhaps the reason for this is the popularity of the Bavarian beir-keller format of drinking and eating establishment, itself popularised by the Oktoberfest and the famous Haufbrauhaus in Munich – the capital of Bavaria.

Invariably when we question our friend about, say, bratwurst, she will say ‘I don’t know, I’m not from Bavaria’. We are a little surprised, but it’s probalby not much different from asking Glaswegian if they like Cornish pasties – it’s not as though the Glaswegion is never likely to have tried a Cornish pasty but they are just as likely to say ‘I don’t know, I’m not from Cornwall’.

Weisswurst is a typical Bavarial dish. But let’s not knock Bavarian food just because it’s more common than other regional dishes. A weisswurst is a very good sausage. In fact, for those who find frankfurter sausages too hot-dog like, or bratwurst too strong and meaty, try a wiesswurst; it’s a much milder sausage, firm, with a good flavour and coarse but soft texture. It also has an etiquette, something other sausages don’t bother with (plonk in bread roll with or without mustard). The sausages are traditionally made fresh (without preservatives) and must be procured in the morning and eaten soon after, usually late morning to lunchtime. When I went to my local German deli, at 3 pm expecting all the weisswurst to have been long-since sold out, I prepared a my question based my newly acquired wiesswurst knowledge. With a nod and a wink, I leaned toward the assistant and said, ‘I suspect you have sold out of ‘weisswurst’ because it is 3 p.m’. The assistant was rather bemused, and directed to me to the chiller cabinet and the vacuum packs of weisswurst. Needless to say wieswurst are now available commercially, with a substantially longer shelf life.

The wiesswurst are gently poached in simmering water, over-cooking spoils their flavour. Often they are served in the water to keep warm. the other distinction with weisswurst is that the casing are considered tough and inedible, so a method has to be adopted to extract the meat, either by sucking at a cut end, or more esthetically, by cutting the skin and scraping the meat away from the casing. The rest of the dish comprises a soft salted pretzel and sweet Bavarian mustard. I’m not really an expert of varieties of mustard. On a recent trip to Goerlitz, we visited a mustard store with hundreds of varieties of mustard. I could only find one that I thought was interesting (with added chilli). But when it comes to weisswurst, the special Bavarian sweet mustard is a must. Finally, a soft salted pretzel is the perfect accompaniment to weisswurst.

This is not really a recipe, you need to pop down to your German deli and buy three ingredients: weisswurst, sweet mustard and soft salted pretzels. Weisswurst look a bit like bratwurst so make sure you have the right ones. It’s worth using the right mustard – this particular sausage goes well with sweetness. Finally, eat the pretzel on day of purchase or as soon as possible after they have come out of the oven.

The only particur note to make on wiesswurst is that they should simmered gently in water for about 15 minutes. NB: Don’t eat the skin of the sausage, suck the meat out or cut the skin with a knife and scrape.

A glass of cold beer is a most suitable beverage to accompany weisswurst.

I forgot to buy sweet mustard so I made some from a French whole grain mustard by heating about two tablespoons of mustard to one teaspoon of dark brown sugar, and half a teaspoon of balsamic vinegar – it looked and tasted like the real deal.