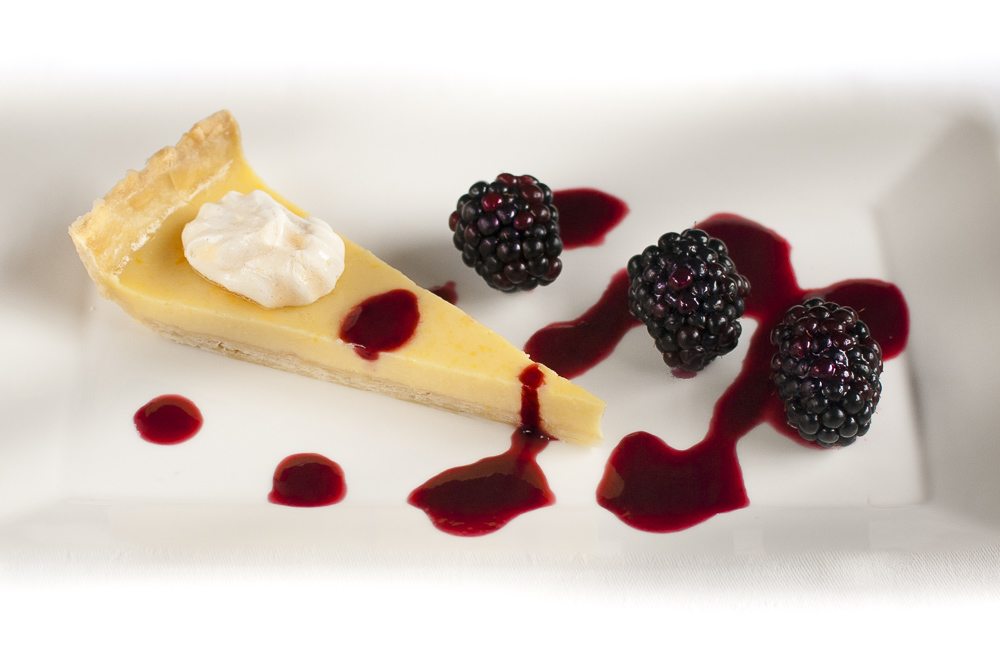 For the pie filling

Zest and juice from 2 lemons

The life of a pie…

This tart was devised as the dessert for our California Dreamin’ 2, Supper Club. But it took a very circuitous route to get to where it is…

It started life as a lemon chiffon pie, which appropriately for a Californian-themed dinner, was invented in the state in 1926 by Monroe Boston Strause, the ‘Pie King’ of Los Angeles. But a lemon chiffon pie does not travel well and the logistics of a supper club, dictate that the dessert is ideally made it in advance of the day. Then it struck me that I don’t actually like chiffon pie. I like a well-made mouse, I like a non-cooked cheesecake set with gelatine, but there is something very artificial about the thick slab of chiffon, no doubt based on early memories of commercial varieties made with cream substitutes – the kind of pie that would be packaged in a cardboard box and feature in the frozen dessert cabinets of the supermarket. So no, not chiffon.

The next idea was a simple shift from chiffon to meringue: a lemon meringue pie. This is also very American (along with its close relative the key lime pie) and I was tempted to put the pie in, if only to acknowledge the often quoted line enjoyed by our family from A Walk in the Woods, by Bill Bryson; where Bill develops a craving for lemon pie on the Appalachian Trail and while seeking sustenance in a diner, asks his waitress ‘…for the biggest slice you can give me without losing your job!’ Despite Bill’s endorsement, lemon meringue pie is made in a very deep dish and piled high with mounds of meringue. At the end of a four or six course meal, this will be too much, no matter how delicious the pie. It also cannot be made in advance as the meringue needs to be baked onto the pie. So no, not lemon meringue pie.

Sticking with a lemon pie theme, there’s really only one option left: lemon tart. In its finest French interpretation, a slim sliver of lemon lusciousness and perfect for the end of the meal. It can be made in advance; and as an homage to lost meringues, I could add a little cheffy mini-meringue.  But, as good as a tart is; it’s just an anonymous tart. It needs another Californian element to be part of a Californian Dream.

Part four – the Boysenberries of California

The Boysenberry flavour was my ‘go-to’ syrup whenever we went out for pancakes with the family. We would also buy jars of Boysenberry jelly from one of our family’s favourite haunts, Knott’s Berry Farm in Buena Park, Orange County. Its founder, Walter Knott was a farmer and known for his knowledge of berries. In the 1920s, he received a few vines of a certain Mr Boysen, a Northern Californian, who had sold his farm, but not before experimenting with a new hybrid berry, a cross between the raspberry, blackberry, dewberry and loganberry.

Walter Knott brought the vines back to his farm and grew them. The result was a long black berry which made excellent syrups, jams, jellies and pies. Walter grew these berries on his farm and named then Boysenberries*. The berry was a great success and popular ingredient in his wife’s preserves and pies. But unfortunately the berry does not possess the resilience and robustness for viable commercial production and eventually the berry fields declined, giving way to other business interests: namely a chicken dinner restaurant and and an entertainment area based loosely on a reconstruction of ‘Calico’ an Old West ghost town of California.

Today Knott’s Berry Farm has grown into a thriving theme park with roller coasters, rides and staged events. The original berry farm is a distant sentimental memory, but is still kept alive in select jars of ‘Knott’s’ Boysenberry jam, available to buy in the park’s souvenir shops. The final ironic twist for the Knott’s is their Boysenberries are probably sourced in New Zealand, where most of the world’s Boysenberries are now grown.

So the finished dessert is lemon tart, with a meringue, ‘mock’ Boysenberry coulis and berries. My coulis was devised to mimic a Boysenberry taste, whilst my berries are blackberries. I suspect much will be lost in translation, but to me, it feels a fitting end to my Californian Dream.

*Out of respect for poor Mr Boysen, who dreamed up the concept of this amazing hybrid berry, I have capitalized ‘Boysen’ in the name of the berry.

It is possible to buy and grow Boysenberries in the UK. James Wong describes in his Guardian article, how the very properties that make them commercially non-viable, make them excellent for the garden, . He also describes how the taste is a cross between Raspberry jam and Bramble jelly. This gives me enough help to ‘mock’ up my Boysenberry jelly!

Make the filling and bake the tart