It’s birthday time in the WDC family. Dad bakes a Sachertorte and does not write Sacher on top but ‘Happy Birthday’! (See photo below.)

For filling and glaze

A few spoonfuls of black cherry conserve or jam

For the chocolate topping

We all know the story of Sachertorte: some guy called Sacher invented it in the early 19th Century in Austria for somebody important and the rest is history – if not very muddled and convoluted history about what constitutes a real Sahcertorte. All the subsequent versions – original or not – have a few things in common: a dense chocolate cake with intense chocolate taste and a thick covering of chocolate, usually served with a big dollop of whipped cream. It can have one or two layers, but it is not a tall-layered affair – more a squat, flat disc of heavy chocolate sponge.

Leo insists that he does not like sponge desserts at the end of a meal. Although I can understand this, when it comes to birthday meals, (especially American birthdays) it should traditionally end with a cake and ice cream. In recent years, our family unwittingly hit on a good compromise – a recipe from an American cookbook, based on a classic torte, using Amaretti biscuit crumbs and ground almonds. It’s now a family favourite. But I find it hard to continually repeat the same cake for birthdays… So I have ventured out on a limb and dabbled in the realm of torte – particularly the Sacher variety. To keep some resemblance of our original torte favourite, I have added almonds. I also used a small amount of cocoa to replace some of the chocolate. It gives a very intense chocolate hit. It’s very continental, and doesn’t knock you out with the normal heavy richness of a chocolate cake. I’ve shown an all chocolate alternative if you prefer. I’ve also added baking powder as a fail safe to the rising power of my egg whites. I’ll leave it in for those who want a lighter, more risen torte, but otherwise leave it out for the full flat, dense torte effect. My topping is perfect, don’t change a thing with this. My other contribution is to eliminate the continental classic patisserie-taste of apricot jam and go for the winning combo of chocolate and cherry. When served with cream it becomes a deconstructed Black Forest gateaux! 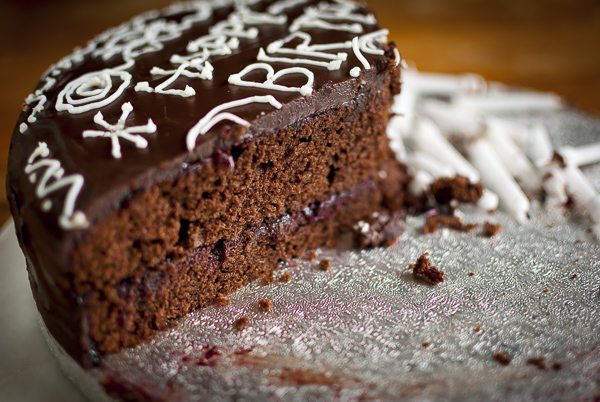 This is a little fiddly for a chocolate sauce, but it will ensure the chocolate does not seize or become grainy.

Are these my favourite way to eat king prawns?