How Many People will a Salmon Feed? 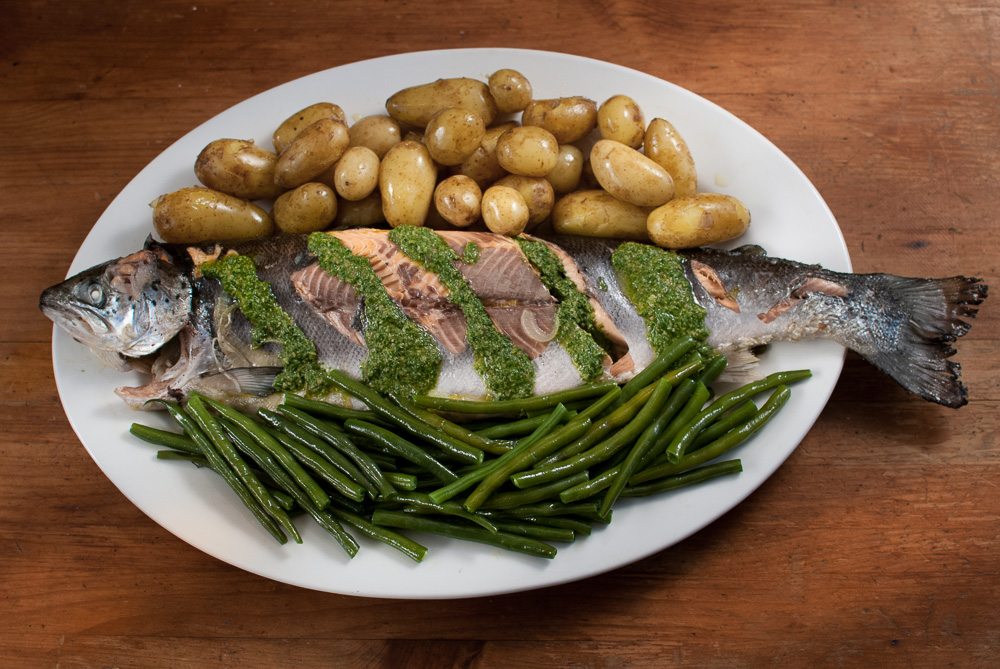 How many people will a salmon feed?

It was Fish Friday and I was in the queue at our local fishmonger – a small stall set outside a farm shop. The fishmonger is on his own plying his wares.

I didn’t mind waiting; the beautiful display of fish was an attraction in itself – and besides, the fishmonger had such a charming and chatty manner it was a pleasure to watch him work.

As I get near the front of the queue, the man in front asked about his special order, which results in more waiting as the fishmonger charges off to his cold store. After a few minutes, he returned with a very handsome, but somewhat diminutive, whole salmon. The fishmonger sensed the man’s disappointment.

‘Lovely sustainable farmed fish from Scotland, hand-reared by Wester Ross Salmon…’ but before he could continue the man interrupted abruptly.

‘How many people will that feed?’

The fishmonger stuttered, vying for some time to work through his answer…

A little flustered myself, I recounted aloud that a portion of fish off the bone would be around 175-200g, so on the bone it would be about 250g and as the fish weighed 1.5kg, I reckoned about six max. The man turned back to fishmonger.

The fishmonger disappears again and returns with an identical salmon (presumably the fishmonger was unable to find a larger salmon, so bought two smaller fish assuming if one was not big enough, the customer might buy the other one.) In the confusion that followed, including further discussions about portion control, the man bought only one of the salmons – still none the wiser as to how many it would feed.

Meanwhile, the other salmon seemed to be gazing into my eyes…

’Sir!’ exclaimed the fishmonger with a cheeky smile, ‘Can I interest you in a salmon?’

Oh gosh, I only came for a couple steaks of hake, but having taken part in this drama, I somehow felt obliged. Still, the price was manageable and good value for six people. The fishmonger continues his pitch.

I decided to barbecue the fish whole and eat some of it hot, saving the rest to have cold another day. I cooked the fish wrapped tightly in foil with aromatics and wine. It worked a treat, and to my surprise, I managed to feed twelve people (and a cat) with the fish. I fed four when it was hot, four when it was cold, and fed another four using the remainder in a frittata (the cat had the scraps).

With my new experience of feeding people (and animals) with a salmon, I now know how to respond to the question: How many people a salmon will feed? The answer: it depends…