Making Cheese in a Bottle 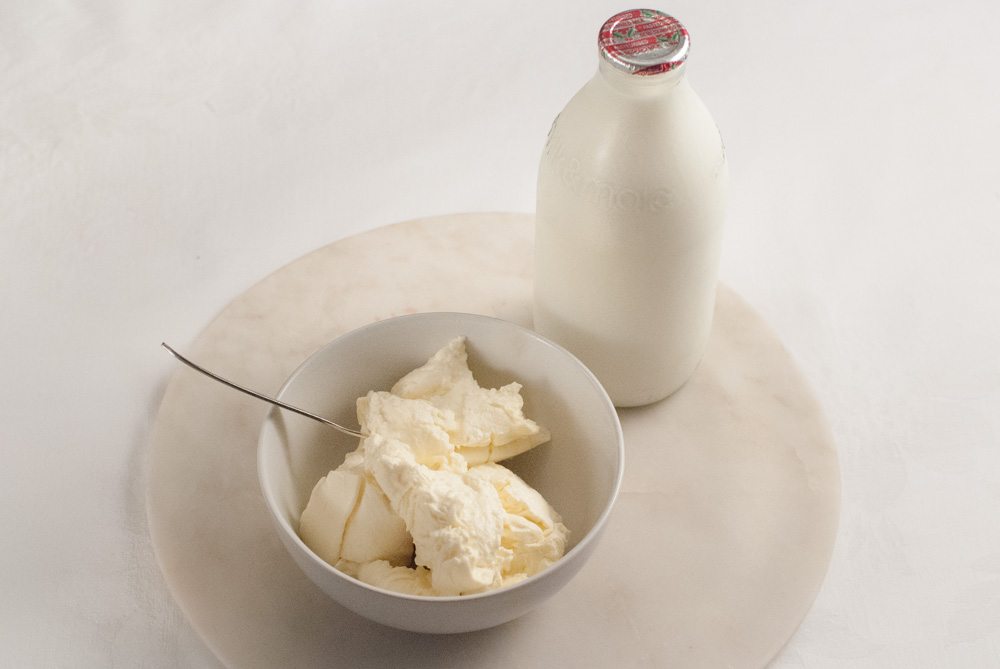 I was aware of the basic principles of cheese making as a child. The micro cultures and chemical reactions did not exist in petri dishes or test tubes, but right inside our daily pints of milk.

At a time when we were told by the Milk Marketing Board to ‘drink a pint of milk a day’, our family did its best to comply. There were six of us and the milkman delivered six bottles of milk every day. Unfortunately, a busy refrigerator is a difficult place to maintain a strict regime of milk rotation and inevitably, one or two bottles would fall out of sequence. These bottles of milk would become sour and undrinkable and without a second thought we would pour them down the drain.

But we should have paused to consider what was happening… These bottles of sour milk were already starting a biochemical journey to becoming cheese. Over time, the natural milk bacteria in the bottles had started to convert the milk sugar (lactose) into lactic acid and hence soured milk – the first stage of making cheese.

Occasionally, the odd bottle of sour milk would get pushed further out of sequence and we might witness more advanced microbial reactions. At first the milk would appear to thicken and congeal toward the top of the bottle. We thought this was gross, but our mother would have observed sanguinely, that we had simply made a pasteurised version of ‘clabber’, a onetime popular staple in the Southern States. It was also similar to cultured buttermilk. Being an American family I’m surprised we did save this thick milk for our weekend pancakes.

Occasionally, some bottles would continue to ferment and sour and turn into fully developed curds and whey. Again, so as not to put us off, our mother would remind us that this was Little Miss Muffet’s favourite treat. Our reaction was the same – gross! But from a scientific point of view, this was the advanced second stage of cheese production where the acids coagulate the casein proteins and drain away the whey.

The reality was that – far from endangering our health – the milk was trying its best to preserve its nutrients; acidic souring being its natural way to stop bad bacteria from spoiling the milk. We might have flavoured our bottles of curds with lemon and salt and them hung in muslin for a simple version of ‘fresh cheese’. This type of intervention is example of the third stage of cheese making – the heating, curing and forming of curds into the various solid blocks of protein-rich cheese we all know and love.

Of course real ‘fresh cheese’ is not made in milk bottles. The curdling process is accelerated by heating fresh milk to start the souring process and then adding rennet (a natural enzyme) to curdle the milk. (Rennet allows a more solid structure to the curd and for the development of more flavour. Lemon or vinegar is often used instead of rennet for fresh cheeses and salt is used to add flavour. Examples include cottage cheese, cream cheese, curd cheese, farmer cheese, fromage blance, queso fresco, paneer and chèvre, fresh goat’s milk – all have a similar mild and fresh taste and smooth texture – and all are made from the same stuff we used to throw down the drain!

NB: the photo above is an homage to something we might have made with our soured milk.