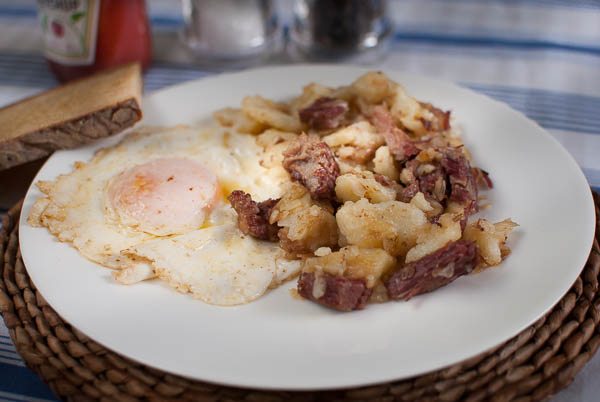 Corned beef will bring emotive memories to most people of a certain age in the UK. For some it’s a reminder of harsher times, when fresh meat was scarce and expensive. Others will scoff with disdain, dismissing the cheap beef as inappropriately crude for the modern table. For others, perhaps it brings back fond memories of school dinners featuring Spam and corned-beef salads: happily consumed at the time, but now safely tucked away as historic aberrations.

Americans often associate corned beef with the ‘flophouse’, where it has become necessary staple, providing a welcome (and economic) dish of sustenance for guests. The connection to poverty is also seen in the rural poor of the Southern States where Corn Beef & Hash is a tin-can staple. As the meat is conveniently preserved in a tin can, the product has also become an essential addition to the survival larder of campsite and barrack. As children growing up in America, we would often eat corned beef hash – there was no shame – we just liked to eat it. Indeed, most Americans are partial to corned beef hash. They recognise wholesome origins in the New England breakfasts made of leftovers.

Corned beef hash (or ‘corn beef’ hash as Americans say) is an American classic served in diners across the country. In fact, it seems to be enjoying a ‘posh nosh’ transformation. As Julia Moskin explains in her article for the New York Times, ‘The humble plate of hash has nobler ambitions’, hashes of all types are appearing on high-class restaurant menus across the land, including the Michelin-starred Longman & Eagle in Chicago. Even Christopher’s, in London’s Covent Garden includes corn beef hash on its menu – and Christopher’s is a restaurant at the higher end of the dining scale.

One clear distinction between American and British appraisals of corned beef is that Americans have a predilection for ‘corning’, or curing, their beef as whole joints – usually brisket. American cooks can buy these cured joints direct from supermarket or deli. This type of meat is known as ‘salt beef’ in the UK and is the joint used in the making of salt beef sandwiches. The lineage of this corned beef traces not back to the ‘bully beef’ of South America, but to Eastern Europe, where Jewish methods of salting and curing were developed and introduced into the USA. (Smoked and seasoned versions of the brisket produce pastrami.) These cured whole joints of meat are far superior to the minced beef that gets processed and packed into the distinctive tapered oblong tins.

Making a hash is easy for any cook, whether at home, on a campsite or in a restaurant. By definition it can’t go wrong. However, if you make the corn beef version of hash try to find a supply of real salt beef. I got a large piece to ‘take away’ from the Tongue & Brisket in Leather Lane. The hash was excellent – I’m not saying it’s haute cuisine, but it’s certainly good enough for our table…