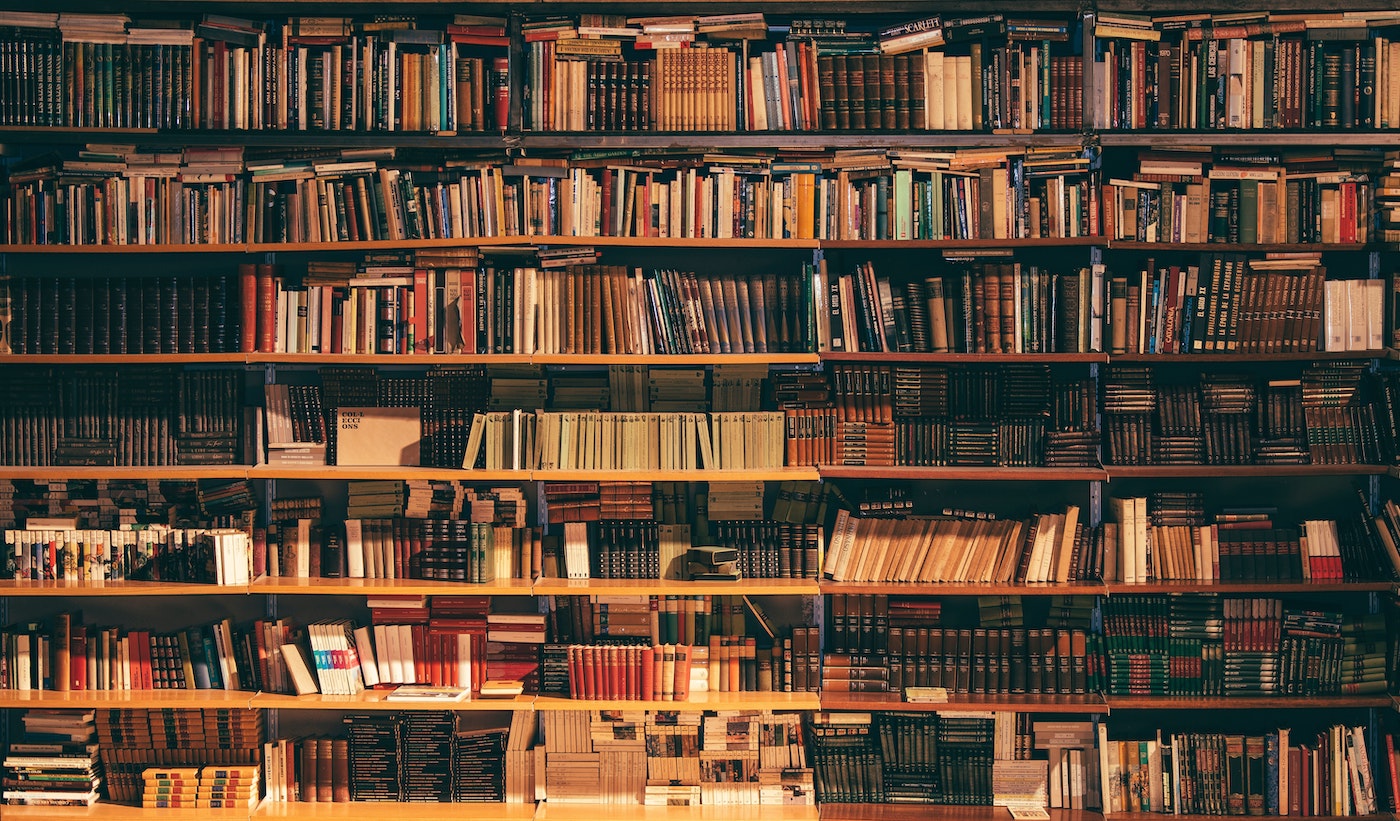 I have a problem with cookbooks: I like them too much.

I have hundreds. So many in fact, that cracks are beginning to appear in the walls around my various libraries from holding the sheer weight of the tomes. Mrs WDC is not well pleased…

I love all my cookbooks. In the beginning, I used them to learn to cook. As my cooking expanded, so did my collection. I read many of them cover to cover, often on a train or in bed; books such as the encyclopaedic, On Food and Cooking by Harold McGee, Les Halles Cookbook by Anthony Bourdain, Nigel Slater’s Kitchen Diaries, and all Simon Hopkinson’s books (a story with every recipe). However, these days many of my purchases might head straight for the shelf with not so much as a flick through the pages. Peter Gordon’s books have had this treatment. I once  attended a cooking demonstration of his at the Divertimenti kitchen, so collect his books as fond souvenirs as much as cookbooks.

The cook or the collector?

I know others have the same problem with cookbooks. Food writer and cook, Diana Henry apparently has a houseful of cookbooks; like me, she recognises her quirky obsession, but also expresses her delight and enjoyment at owning such a library. Felicity Cloakes, the Guardian food writer, does not say how many books she has assembled, but since the concept of her articles is based on other cooks’ published versions of the cook’s canon, her house must be similarly bulging as Diana’s and mine.

I wonder if I would keep collecting books if I did not continue with the WDC blog. After all, I do use my books to help develop recipes; sometimes I use them for a meal inspiration and very often, I acquire them to gain insights into food photography. However, if I’m honest, I fear my interest has extended beyond the tipping point where I slip inexorably into the realm of hopeless and addicted collector.

Cookbooks are not the same anymore

The cookbook market has changed over the years. In the beginning, when I first started using cookbooks, cookbooks helped people to cook. Usually, they were sparsely illustrated.

Some of my favourite books are the paperbacks I collected back in the 70’s by cooks such as Jane Grigson, Elizabeth David and Claudia Roden. Not a single photograph in any of them – not even a picture of the author. These books are about the love of food and good cooking, and they each celebrate their knowledge with hundreds of useful recipes.

Later, during height of Dorling-Kindersley’s popularity of the 90’s, books became highly illustrated with staged photos of recipe procedures. For self-taught cooks, in a pre-YouTube era, these were very useful and practical. I collected all of the BBC’s Foolproof… series of cookery books, specifically for the illustrated ‘step by step’ guides to cooking a particular cuisine.

How to collect cookbooks

I buy many full price, ideally from a real shop where I can peruse other titles – a trip to Foyles cookery section in London is a special treat. A significant portion arrives as gifts. But most come from charity shops.

To get good charity books, you need patience and determination. I have been lucky to discover shops where a local publisher or reviewer off-loads pristine freebies; I have found others that surprisingly acquire good stocks of distinctive quality titles or out-of-print classics. One or two shops overtly seek and boast good quality titles and reflect this in their price. This makes good sense for the charity, but takes most of the fun out collecting: the books become relatively expensive and therefore less valuable as random finds.

There are many charity-shop gems in my collection, The Mirabelle Cookbook by Marco Pierre White (£1.50), Ad Hoc by Thomas Keller (£2.00), Book of Jewish Food by Claudia Roden (£2.00), Guide to Modern Cooking by Escoffier 1979 (£1.00) to name a few.  I’ve had plenty of duds too – mainly trending concept books such as meals for under a fiver, or just 5 ingredients etc. I’m a skilful enough cook to produce a passable meal based on a range of limitations – but clever as the concept and outputs may be they just don’t seem hold my interest for long.

I have a few rules – no Jamie Oliver, Hairy Bikers or similarly grinning over-exposed TV-fame merchants. Jamie is likeable, along with the others of his ilk. They all have good teams and their books are well produced and conceived, but I cannot cope with the relentless need for commercial success and self-promotion. I presume many people have the same reservations judging by the endless versions of these books packing the shelves of charity shops.

I have on occasion broken my own guidelines: I carefully choose certain Gordon Ramsey and Gary Rhodes books. I was never keen on these chef’s TV personas, but on close inspection of their recipes, it is clear both have an excellent understanding of how to cook. In particular, Ramsey’s Just Desserts is well-worn stalwart in the collection; Ramsey started life in the patisserie section, and combines this knowledge and experience with the tricks of the trade.

I do have many of Rick Stein’s books. Of all the TV chefs, I relate most to Rick Stein. I feel that my cooking journey has progressed in parallel with his cooking adventures around the world. Besides, he is quite self-effacing and openly aware of his limitations and rather blasé – if not politely discrete – about his fame.

More than a cookbook

My cookbooks are more than recipe collections; most have a significance beyond the covers. They have personal connections with my past and travels. American cookbooks connect me to my family origins in the States; Jewish, German and Scandinavian cookbooks reaffirm the influence of migrant’s cuisine to America; Mexican books acknowledge the history and juxtaposition of Mexico to Southern California. My parents both lived in Japan and carried much of the food culture back to America – so I have many Japanese books. Similarly, fascinated by the Vietnamese communities in California (and my narrow escape with Vietnam war via the draft lottery) I could not resist buying a Vietnamese cookbook – and it is true to say that even now, it gives me strange feelings, despite the wonderful cuisine. My French, Greek, Turkish, Spanish and Portuguese books all remind me of foreign visits and holidays. I don’t know if I will ever travel to the Middle East, Thailand or China – but my many books (and prepared meals) of their cuisine give me good insights into what the countries might be like.

I have two Korean cookbooks. We used to take an elderly friend to have a fortnightly haircut in New Malden High Street (New Malden has one of the largest diaspora of Koreans outside Korea). Ladies haircuts take a while so I had time to browse the local shops including the numerous charity shops. In two years of searching I never one found a single Korean cookbook in any of them. I had fun pondering the reasons: Do Koreans know how to cook, so don’t use cookbooks; or don’t Koreans know how to cook and keep their cookbooks? I think the real reason is that any keen Korean cook will import their cookbooks direct from Korea so donating to a local charity shop would be pointless.

Italian cookbooks form the largest part of my collection. Mrs WDC is second generation Italian and we have visited her parents homeland often. Antonio Carluccio’s Introduction to Italian Cooking was one of the first Italian books I owned and informed much of my early cooking. Marcella Hazan and Georgio Locatelli provide thoughtful insights into a lifetime of a cooking Italian food. Theo Randall helps to reinforce the principle that we should never over-complicate Italian food. Ruth Rogers and Rose Gray, in their River Café books revel in first-hand learned knowledge from their travels in Italy and enthusiastically demonstrate the art and diversity of Italian food. Aldo Zilli has the best recipe for panna cotta… All this confirms for me that you can never have too many Italian cookbooks!

As Cyrus Todiwala says, no one can claim to be a master of Indian cooking: there are so many styles from every region it would be impossible. Ipso facto, it would seem a collection of Indian cookbooks would be infinite. I don’t have that many but my collection is slowly growing. Most treasured are those by very elderly women of various regional cuisines (examples of the nanas, nonnas, mamans, yiayias, and grannies often cited as the inspiration behind a successful chef). The authenticity of their recipes is enlightening. The writing and printing of the books is often poor, but this just adds to their charm…

My most expensive – and heaviest – cookbook is the French Laundry Cookbook by Thomas Keller. I asked (rather audaciously) for this book as a present. When it duly arrived, I was both delighted and wracked with guilt. I hoped to return the favour (and assuaged some of that guilt) by presenting a French Laundry tasting menu for the present-giver and their partner. It resulted in an amazing and memorable meal. The synchronicity seemed perfectly apt. We all made a pact that we will meet and eat at the actual restaurant sometime in the future.

I imagine I might provide a similar range of themed dinner parties for all the guests who have bought me cookbooks through the years. This might take some time… However, I thought I had an opportunity to make a start when we were hosting a birthday BBQ for our son, Leo. Leo had recently bought me Korean Soul Food by Judy Joo, so I suggested a Korean buffet. Instead, Leo said he would like corn on the cob. This, of course, I interpreted as meaning a full-on Mexican, and proceeded to plan a large themed spread (even though there were no links between Leo and any of my Mexican books). Around the same time, at my birthday BBQ, another son, Pete, gave me the same Judy Joo book. There was the usual kerfuffle as the sons tried to rationalise the confusion, but I was happy enough; Pete had the receipt, and I knew I would be able to choose a new book! I bought Nopatilo: A Mexican Kitchen, by Gonzolo Guzmán (recipes from the restaurant of the same name in San Francisco). Happily, the book has good recipes but more importantly, provided a memorable link to Leo’s Mexican BBQ.

Why do I collect cookbooks?

Well, I could say that my library is a vast and important compendium of cookery knowledge and wisdom, the contents of which compare with any other library. My cookbooks open windows on the human condition, shedding light on our common instincts, our rich diversities, traditions, rituals, and religions. I could say my collection tells of universal stories experienced at dinner tables around the world, bonding generations, families, and friends by the generosity and sustenance of sharing a meal. I might say these volumes lift the human spirit, energising the body, and culturing the mind through the pleasure of cooking, eating and giving…

Or it could be that I just like cookbooks.